“Horse Feathers” (1932) is about winning a college football game. You have to remind yourself of that from time to time, because so much else happens in the maelstrom of Marx Brothers shenanigans, that football seems hardly the issue. What is the issue? Everything, and nothing. 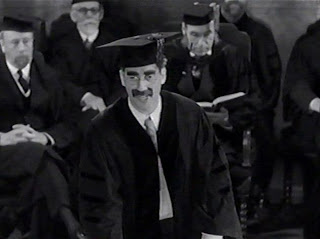 Groucho, the default leader of the group, is newly arrived college dean at a school dying to beef up its football program, because after all, that’s what college is all about. There’s nothing more important than football. I suppose I could interject a line here about Penn State, but we’ll just let that go.

Although, Groucho would not have let that go. 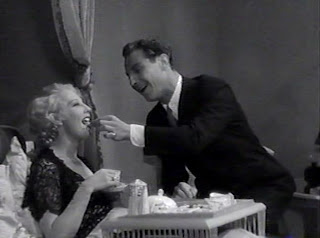 Zeppo, the handsome, singing, otherwise comically untalented brother, plays Groucho’s college boy son. He spends a good part of the movie chasing the lovely Thelma Todd, who I think we last saw here in “Bargain of the Century” (1933). Unfortunately, as is the case in Marx Brothers movies, Thelma does not really get to show off her marvelous comedic talent; instead she can do little more than react to their antics. This was her second film with the boys, however; she also appeared with them in “Monkey Business” the previous year. 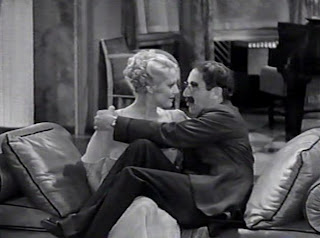 Thelma plays a “college widow”, aka, a vamp, who in this case is trying to obtain the team’s secret plays using her feminine wiles. There are moments, such a very funny canoe ride with Groucho, where she is less than subtle about her objectives. 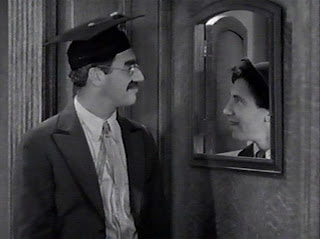 Harpo is a dogcatcher, and Chico works at a speakeasy. Which you cannot enter unless you know the password, SWORDFISH.

It’s pretty neat that Harpo peels a banana as if it had zippers on either side. In the early 1930s, zippers were just beginning to be used in some clothing, but hadn’t really been used widely by manufacturers in until the end of the decade. 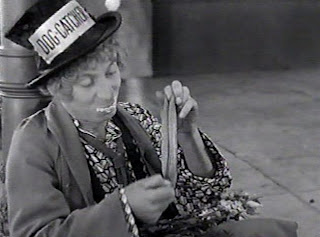 I also like the way Harpo orders a scotch in the speakeasy by pantomiming a highland fling.

We have another topical reference when Thelma tumbles out of the canoe and pleads Groucho to throw her a lifesaver. Of course, he throws the candy. And the “Jumping Anaconda!” line which refers to the stock that dropped like lead during the Crash.

Harpo and Chico are recruited to kidnap the star players of the rival school, but are kidnapped themselves instead. By the end of the film, they are recruited as students to play on the team, with hilarious results. 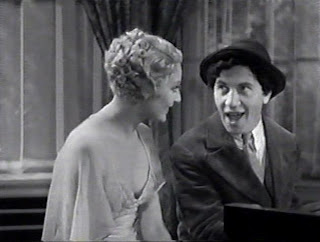 The songs are melodic, and silly. When Chico gets a chance to show off his piano playing and Harpo gets a really lovely harp solo, some movie fans feel that this brings the action to a grinding halt, but it is for this very reason that I like the musical solos. It’s a moment of calm in the storm that is incongruous because everything about the Marx Brothers is incongruous. That they are so talented musically seems just another absurd thing about them. A harp solo in the middle of chaos doesn’t fit; and for that reason according to the Marx Brothers doctrine, it fits. 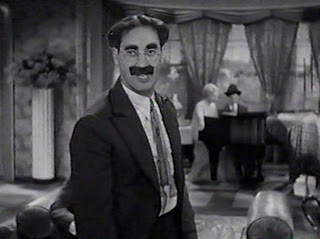 Still, in case we fidget, Groucho breaks the fourth wall while Chico has his piano solo and tells the audience, “I’ve got to stay here, but there’s no reason you folks shouldn’t go out into the lobby until this thing blows over.”

Oh yeah, and then there’s football. Have a look here at the climax of the big game, where, naturally, anything goes.

One of the great moments in cinema is Harpo giving the speakeasy password: sticking a sword into a stuffed fish. That's why we love the films of old Hollywood! Thanks for a terrific post.

Thanks, GOM. It's impossible to pick out certain lines in this film as quotable without ending up having to type a transcript of the entire movie.

I agree with you about the music, although I could easily do without the songs by the "straight" characters. They always seem bland in comparison to the ones the Marx Bros perform themselves. And Harpo could really work that harp.

"Whatever it is, I'm Against it!"
Brilliant stuff from the Marx Brothers in one of my favorite of MB films. The entire film just runs amuck in hilarity. Great post on a great film that I have to watch at least once a year!

Hi, Rich and John. So pleased this film has fans. I love how the different verses of the "I Love You" song is taken by the four of them in different manners and lyrics fitting their characters.

Jacqueline, there is rarely a bad thing to say about the Marx Bros.' movies -- I love them! You know, I never put together the fact that zippers were just beginning to be used with Harpo's banana scene!

Personally, I adore the musical numbers that Harpo and Chico do. I think your point of a little quiet amongst the chaos is right on. When Groucho breaks the fourth wall, it's always funny, especially his line in this one.

I really enjoyed this look at a favorite film of mine. Great job!

Thank you, Becky. I haven't really covered much about the Marx Brothers in the past, which surprises me when I look back. I think when some films or some actors are so well known, I tend to skip over them thinking there's not much else to be said.