And the winner of a paperback copy of my time travel adventure novel Myths of the Modern Man is…..

Congratulations, Bob, and thanks so much to everybody who entered.

As I’ve been touting for a few weeks now, I’m going to be spending 2014 discussing the career of Ann Blyth, not only  her films, but also her stage work, television and radio appearances.  Here’s a preview of the intro post…


...if you know Ann Blyth only through her frothy MGM musicals, you don't know Ann Blyth.  In dramas she has morphed into the epitome of hateful, sensual, heartbroken, and shamed.  If you know her only as the demon teen Veda in Mildred Pierce, you don't know Ann Blyth.  The same colossal greedy train wreck of a girl who spit infective at Joan Crawford and smacked her in the jaw also performed a night club act to enthusiastic crowds in Las Vegas, bringing them to tears with the sentimental "Auld Lang Syne" and sang at the California state fair.  If you only know her from The Helen Morgan Story or melodramas, you are missing her genuine gift for screwball comedy.  Sinking herself intellectually, just as much as emotionally into these roles, she swims against the powerful and unrelenting current of studio typecasting.

The scene of her debut was radio variety and drama, the true child of the 20th century that, with few exceptions, became orphaned long before the century was over.  It trained her to use her voice, not only as a singer, but as a character.

This will be my last post until then, because I’ve got some other fish to fry.  So I’ll say goodbye for now, and very blessed and Merry Christmas to all who celebrate it, and of course, a very Happy New Year to all.

Thank you for the pleasure of your company this year.


The answers to our Thanksgiving Dinner trivia photos are as follows:

Thanks for playing the game.

Now I have one last book giveaway for a while. This is for a paperback copy of my time-travel adventure Myths of the Modern Man. Just send me an email to JacquelineTLynch@gmail.com with the message: I WANT THE BOOK, and I'll throw your name in the hat. I'll pick the winner next Thursday, December 12th, and then I'll email the winner for the address to send the book. Nobody's email or mailing address will ever be published on this blog.

Now for a little synopsis: 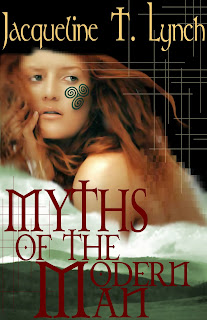 A late twenty-first century time traveler battles bards, druids, warrior queens, and Roman cohorts for survival during the Celtic rebellion against the Romans in Britannia, 60 AD.

Time traveler John Moore’s fate is determined by four women: the Celtic warrior queen Boudicca; Tailtu, a gentle slave purchased from another clan; Dr. Eleanor Roberts, a severe, jealous and brilliant woman who spearheads the time travel mission; and enigmatic Dr. Cheyenne L’Esperance, herself a time traveler from an even more distant future. Moore’s mission to survive three battles against the Roman legions coincides with survival tactics and backstabbing in the modern government department. The savage past clashes swords with the desperate future in a time continuum of treachery.

The interesting (or irritating, depending on your point of view) quirk about this novel is that the chapters alternate between first person narration -- when the time traveler goes back to Britannia, and third person -- when we see the future world from where his mission is being run, and possibly being betrayed. To show you what I mean, here's a couple samples from the book. This part here is in first person. The time-traveler is telling his version of the story:


We did not speak. They wanted to kill me now that we were far from the tribe and they were free to do it, but that would no longer serve their purpose and none of them could return to the Iceni if they did. For my part, I was here because I was a liability to the Queen now that I had shamed her, so she had to get rid of me, and yet she must have felt that I was the most potentially useful member of this diplomatic corps because of my ability to see in the future. I could impress and scare Cartimandua into joining the Iceni, in a way Dubh, nor Nemain, nor Cailte would be able to impress or frighten. Boudicca was that vindictive, and that brilliant.

And now we were going off the script. Boudicca, history tells us, did not achieve an alliance with Cartimandua. History does not record that she ever sought one. But, here we were, and how much of this was due to me?

When we were approached, disarmed, and brought to the queen’s tent under guard, Dubh strutted like a man who was about to get his terms.

Three guys bigger than him pushed the moron to his knees before the queen. I smiled. Nemain dropped to his knees quite voluntary and stared obediently at the ground. Cailte and I stood quietly, calmly looking around like we were going to buy the place, and then both of us slowly knelt as casually as if we had nothing better to do. A little more solemnity by either of us and it would have appeared we were jointly kneeling to receive our marriage blessing. It sickened me to discover how much alike he and I could be sometimes.

Now I had to take something into account. If for some reason I did not get myself to the correct quadrants within southern Britannia by the end of October, which I would know because of the celebration of the Samhein, then Eleanor could not bring me back. I would be stuck here. There was a geographic element to the successful machinations of gravitational time travel, even if you were sent to a time with no atlases. Getting hung up far north of where I was supposed to be would seal my fate and keep me here for the rest of my life.

Not that I really wanted to live the rest of my life in the late twenty-first century either, where survival fell into the hands not of the fittest, but of only those who could afford it. At least here, I stood as good a chance at living as anyone else here did. We all have to die sometime. It’s how you fill up your hours in the meantime that’s the big deal.

And this bit here is in 3rd person in the futuristic lab where all this larger-than-life science/sociology is being concocted:

Dr. L’Esperance ordered Eleanor, gently but firmly, to take off her clothes.

Eleanor’s growing sense of panic reduced her ability to think clearly, and her near-hysteria took the form of a sudden helpless resignation to take orders. Eleanor undressed, wondering what she would say if General English suddenly entered the lab, but almost wishing he would, anything to delay or stop this. Dr. L’Esperance looked pleased with the tunic she lifted from the satchel in which it had been secreted to the lab and as she examined it, spoke again of Milly’s efficiency, which Eleanor again grudgingly acknowledged to herself was the truth. She had never given Milly enough credit for being a good administrative assistant. Now Eleanor was being sent to hell, otherwise known as 60 A.D., because of it. This is what happened to people who were not kind to their staff.

Dr. L’Esperance slipped the long, saffron-colored tunic of some coarse linen over Eleanor’s naked body, and gave her a gentle hug to comfort her, because Eleanor was shaking. She fastened a plaited leather belt around Eleanor’s waist to draw the baggy tunic in close to her slender waist. Dr. L’Esperance then draped a woolen cloak around Eleanor’s shoulder, and fastened it with a thin silver brooch.

“They were quite vain, weren’t they?” Dr. L’Esperance said, “They loved their finery.” She placed a torque of twisted silver around Eleanor’s neck, to mark her as noblewoman and not peasant.

“My hypothesis about the staging area for captives is based on reports from this agency,” Dr. L’Esperance continued, “For you see, after your mission failed and Colonel Moore was not returned, as a way of deflecting public outcry against the agency, a follow-up mission occurred to save Colonel Moore, to attempt to retrieve him. Of course, you did not have the electromagnetic tracking technology then, so your operative’s mission was to remain for roughly half a year and manually search out Colonel Moore or information about his final status. His return was to be accomplished through a synchronized rendezvous point, in a similar arrangement to what you had with Colonel Moore.”

“Alas, the second attempt was also unsuccessful. That operative was also lost.” Dr. L’Esperance then brushed Eleanor’s hair, and the slow, soft stroking relaxed her to the point of recalling briefly her mother and her sister in the trailer park, the only other two important women in her life, and how she hated them, wishing now it were not so.

Mesmerized, she quietly replied, “The…the only other candidate qualified at this time is Colonel Yorke.”

“I am responsible for two deaths.”

See you next Thursday when we announce the winner of a paperback copy of Myths of the Modern Man, and for a sneak preview of my 2014 project of examining the career of Ann Blyth.
Posted by Jacqueline T. Lynch at 8:13 AM No comments: