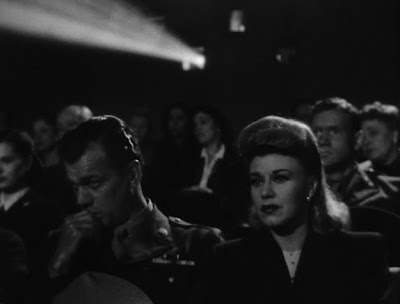 I sometimes like to watch Christmas movies when it’s not Christmas.  I’m speaking of classic films, of course, because as we’ve mentioned before, Christmas is usually only part of the setting in these films, the background.  It is hardly ever the single theme of the movie.  When watching a classic film with a Christmas setting, it is usually a cozy, sentimental experience, and we are never left—as we often are in modern-day Christmas movies—feeling as if the yuletide is being shoved in our face with all the subtlety of being smacked with a custard pie.


Cozy, sentimental, yes, but also classic films in a Christmas setting usually have a dramatic edginess to them that heightens our emotions and makes the sentimental denouement all the more powerful.  What’s at stake is not the tiresome Best Christmas Ever that so many modern stories are concerned with, but rather the retribution for the crime committed, the redemption of a shattered, sinful human…and sometimes you can toss in the angst of World War II.


We have all of that in I’ll Be Seeing You (1944).  We’ve covered this move here in this post at length, but seeing the movie recently again on TCM, a few more thoughts occurred that I wanted to bore you with.


The extra insight we get from watching a movie like I’ll  Be Seeing You when it’s not Christmas was first brought home to me many years ago.  The first time I’d seen the movie was, actually, during one Christmas when I was a teenager, but the next viewing was several years later, on a hot summer day.  Nothing Christmassy about it.  I can recall having to run some errands, though the only thing I remember clearly is going to the bank.  I delayed leaving the house because the movie had me in its clutches.  I think I stood in front of the TV with my car keys in my hand for the longest time, unable to pull away.  I remembered seeing it before, but now that years had passed, and it was a hot summer day and there was no tinsel anywhere—I was no longer focused on the Christmas week/New Year’s events of the movie, and settled in on the wonderful everyday detail of this really underrated film. 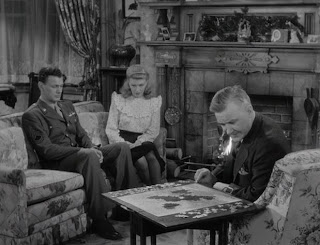 William Dieterle directs, and his inclusion into the movie of such mundane images as the jigsaw puzzle father Tom Tully has set up in the living room, the claustrophobic room at the YMCA, the family around the table, the exuberant New Year’s Eve party, the getting ready to go out to the party, the baking, the housecleaning.  The way the actors fit into these settings is strikingly meaningful and neatly done.


Our attention is drawn to the jigsaw puzzle because Joseph Cotten stoops to pick up a piece that has fallen on the floor, something so common when we make jigsaw puzzles.  The pieces are always trying to escape.  Picking up a piece is also a metaphor of sorts, if you want to stretch it that far. 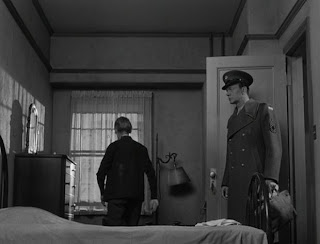 We experience the prison cell of a room at the Y when Cotten enters and we see his heavy steps, his waning strength sapped by indecision, his helpless anxiety when he enters.  The room becomes all the worse for his reactions.  Later, of course, the horrific panic attack and the room almost becomes alive with terror. 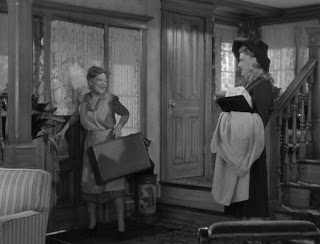 I love the clutter of the house, the tchotchkes on the mantle, that extra chest of drawers in the upstairs hall.  Shirley Temple’s room with the tennis rack and pennants on the walls.  (Though I am puzzled by the closet in the living room entryway.  Look at the set, where the windows on either side are placed, and the outside of the house.  It doesn’t seem as if a closet should fit into that wall there.)


I love the ornaments on the pine tree in the front yard.  We are given so much to look at in this movie. 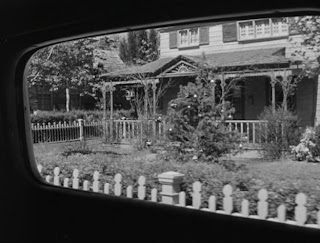 The movie is almost a hybrid cross between William Wyler’s The Best Years of Our Lives (1946) covered here and Alfred Hitchcock’s Shadow of a Doubt (1943) covered here.  In Best Years, we have the troubled veterans returning to a society that is too much for them to handle, a world that has passed them by, just as it as Ginger Rogers and Joseph Cotten in this movie.  The taxi ride Ginger Rogers takes from the train station to her uncle and aunt’s house is similar to the cab ride of the three vets.  We see her view from the back seat, the cozy, cottage-like house out the cab window, a paperboy tossing a newspaper over the white picket fence.  Homey, idyllic, and greeted warmly by Spring Byington.  Everything should be wonderful from now on, but it isn’t. 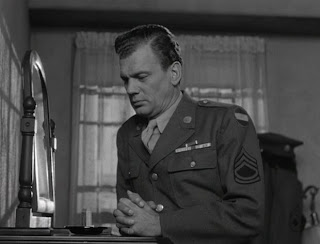 Like a Hitchcock movie, all is not what it seems.  There is a restless, even sinister undercurrent here, and it takes a while for us to sort it out.  What I really love is that though we learn that Ginger Rogers on furlough from prison where she is serving a sentence for manslaughter, and that Joseph Cotten is on furlough from the psychiatric ward of a veterans hospital, they are not stereotypes of a convict and a mental patient.  We learn to like and accept them before we know anything about them, and we must weigh our agreeable first impression with an unsettling second glance. 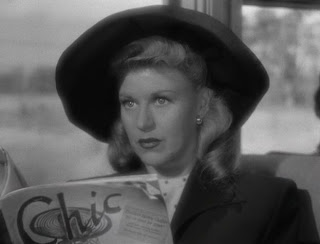 Miss Rogers, who gives a really fine, nuanced, understated performance, is pensive, and really the only one in complete control of her emotions and philosophies.  She has had plenty of time to think in jail, about herself and about life in general.  She is deeply troubled, but she has both feet on the ground, so much so that angst-ridden Mr. Cotten quickly comes to lean on her emotionally and she provides the foundation for his recovery. 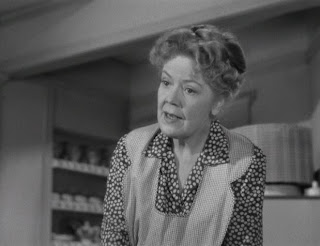 The “nice” middle-class family has some interesting Hitchcockian foibles.  For instance, when Spring Byington relates that life is full of accepting “second-best” choices, we may conclude a dismal life or at least a dismal marriage between her and Tom Tully.  It takes several scenes more for us to realize the first impression we have of her is incomplete, and that her character and her life is many-layered. 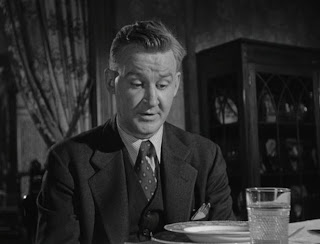 Tom Tully first presents as a kind of stuffy, pontificating, self-congratulatory mental lightweight.  His first meeting with a clearly embarrassed Ginger Rogers is awkward as they sort out their roles: the repentant, grateful niece, and the benefactor who reminds her he paid for her lawyer.  When he grandly announces that they should talk no more about it, as if he is waving off all she owes him, we might expect him to keeping reminding her about her imprisonment and his kindness to her, but he doesn’t.  Tom Tully turns out to be a nice guy, a little stuffy, but genuinely concerned, just a drug-store owner set in his ways.  Again, first impressions prove false.  I love his hesitation as he winds up his prayer, as if reviewing a mental list of people for whom he must pray.  Then caps it with a satisfied, "Amen." 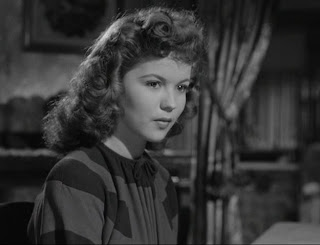 Shirley Temple, whose morbid curiosity over her elder cousin’s imprisonment leads her to make one indelicate remark after another, but gradually demonstrates she’s only putting her foot in her mouth through ignorance and immaturity.  She's not the Bad Seed after all, she's just a teenager.


Forgiveness is strangely sometimes harder to do over the little things than the big things.  We find ourselves learning to shrug off the insensitivities of this crew in order to see how really fine they are, just as Ginger Rogers and Joseph Cotten must shrug off a thousand little pinpricks life is going to mete out to them if they are to really move forward. 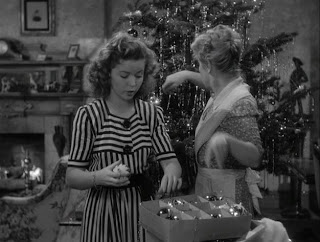 And I love the shot of Spring Byington and Shirley Temple putting the ornaments back into the box, as if demonstrating that we can even move on after Christmas, that the holiday can be managed sanely, without overwhelming us.  Also because I have a decades-old ornament box just like that.  Kind of beat up now, but I wouldn’t part with it.  It’s older than me and deserves my respect.


Do they marry right away, and will they live in the same town as their new adopted family that Spring Byington, Tom Tully, and Shirley Temple represent? 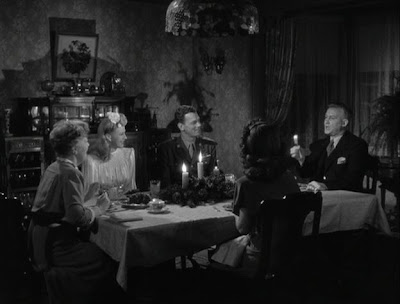 Scenarios fill the mind like jigsaw puzzle pieces.  A post-war job.  What kind of a job?  Children.  More family meals around that table on visits and holidays?  Do they help look after Spring Byington and Tom Tully in their dotage?


Does the mundane and “second best” form a protective blanket around the troubled couple at last?

Annette Funicello passed away today after a very long struggle with MS.  Monday used to be Fun with Music Day on The Mickey Mouse Club.  Bless her for leaving us with some treasured pleasant memories.

I'll be appearing with a number of other local authors at the Author Fair at the Springfield City Library, Springfield, Massachusetts on Saturday, April 6th. This will be a meet-and-greet event with the public, and a selection of my books will be available for sale.

Posted by Jacqueline T. Lynch at 7:21 AM No comments: