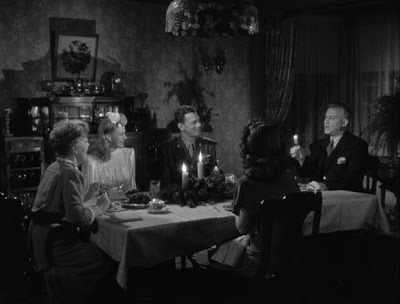 I’ll Be Seeing You (1944) is an unusual holiday film, quite grim despite its sentimentality, and manages to be hopeful despite the dismal circumstances of the man and woman who meet on furlough and fall in love. It was one of the first films to deal with what today we would call Post-Traumatic Stress Disorder.

Joseph Cotten plays a soldier on furlough from a military hospital where he has been treated for wounds suffered in the South Pacific, and for what were then called neuropsychiatric issues. In World War I, it was called shell shock.

Ginger Rogers is on furlough from a local women’s prison, having been incarcerated three years ago for manslaughter when she fended off the sexual assault of her employer, and accidentally caused his death. She is halfway through her sentence, and is being granted a Christmas leave on a special program for inmates with good behavior.

We first see them wandering shyly through a train station. In contrast to the hectic bustle around them, both move slowly, as if dazed. She has been in prison since before the war, and the pace and energy of wartime society is new to her, with an urgency that intimidates her. She tries to buy candy and gum at the newsstand, and the man behind the counter sarcastically wonders aloud where she has been? Wartime shortages are new to her. The soldier is clearly anxious, and physically tired. Every move seems to cost him effort. He makes many mistakes doing simple things, like buying a magazine.

They meet on the train. Two other young servicemen join them, fast talking, both flirting with Ginger, loud and cheerful, and annoying. When they both leave momentarily to get food, the two older, quieter passengers strike up a halting conversation. Cotten’s character is obviously trying to tough out some kind of challenge by speaking to a strange woman, and Ginger’s character responds with patience and kindliness. Her prison years have left her nonjudgmental, and cautious, and introspective. Both actors carry the story well, as Mr. Cotten displays heartbreaking vulnerability and courage, and Miss Rogers shows she is adept at more than comedy or dancing with Fred Astaire with her quiet and understated performance.

Through the train windows we see the landscape of the American Southwest slip by. When she tells him she is disembarking at a nearby town to visit her uncle and aunt for Christmas, he invents a reason to get off at the same stop, and makes an awkward attempt to ask for her phone number. He is clearly not the predator that the other two young men in uniform were, and she allows him to contact her later. At this point, the audience has only a scant idea of the soldier’s psychiatric problems, and knows nothing of her past.

Tom Tully and Spring Byington play the uncle and aunt, and Miss Byington must win the prize in this role for most motherly person on the planet. Theirs is a warm and cozy kind of fantasy home for a person who has none. There is a decorated table top tree, a radio that plays Christmas music, and what in one scene that sounds like National Barn Dance. Dad stubbornly perseveres at a jigsaw puzzle set up in the living room. Shirley Temple is their teenage daughter. Miss Temple is probably one of the few child stars to ease gracefully into her teen years, the most awkward time in anyone’s life. She successfully plays a typical soldier-crazy, hepcat teen of her generation, likable if not a little exasperating at times. She is well-meaning, but throughout the film unthinkingly ostracizes Ginger with blundering comments and actions. Anytime anyone mentions words like prison or cell or criminal, her pain is acute.

The soldier is invited to have dinner at the uncle and aunt’s house, is teased by Miss Temple, and later in the film he is at ease with this family enough to tease her back like an older brother. But a long journey for the soldier must be traveled first, even though it happens in a short time.

In his dreary YMCA room, we see his loneliness and his fear at being alone. A voice over by Cotten speaking the soldier’s thoughts lets us in on his fear at having another panic attack, and he struggles with himself to keep his anxiety down, giving himself a pep talk. Later in the film, he experiences a panic attack in his room, and we go through the sensations with him, his rapid heartbeat, his aural and visual hallucinations, as he collapses on his bed, pouring sweat, and panicked that he will not come out of this dark terror without the help of orderlies and medication. He grips his shirt at his stomach, perhaps reliving the moment of his bayonet wound.

However, he comes out of his attack, in part through the memory of the sound of Miss Rogers’ voice calming him, and when he stands up, exhausted, his clothes soaked in perspiration, lifting his face to the bare ceiling light that had taunted him with fireballs a moment before, he is astonished and triumphant, whispering, “I made it” over and over. It is one of the most affecting scenes in the film.

Ginger’s troubles are less debilitating but less able to conquered. She is in a dark hole, too, and has no expectation of ever claiming a normal life again. She confesses to her aunt, “Coming out in the world and seeing everybody in uniform, everybody doing something. I just don’t belong. I don’t fit in. And dreams that I had for the future are just impossible.”

To which Ms. Byington replies, “Most dreams are, Mary. It’s the dreaming that counts.”

Ginger does not tell the soldier she is going back to prison after the holidays, for his sake as much as her own. She is sensitive to his anxiety and lack of confidence. When they go to a movie together, and it is a war picture, he can barely make himself look at the screen.

They take an outing in the country, and being from the east, he remarks how strange it is to celebrate Christmas in a Southwest desert. She replies, “I don’t know. This seems more like Christmas to me than the kind they have back east. I mean, this is more like the country where they celebrated the first Christmas.”

He must face a noisy New Year’s Eve party, and she must face running into people she knows there. Eventually, the vacation ends, Spring Byington takes the ornaments off the Christmas tree, and Ginger has to go back to prison, where she likely has another three years to serve. Her soldier finds out, and retreats briefly back into depression and feelings of betrayal, and they part. She is devastated when she discovers he knows.

Their 11th-hour reunion at the gates of the women’s prison is certainly an unlikely trysting place for a Hollywood film during the war and about Christmas. It is both sad, and yet hopeful as they renew their feelings for each other. The film’s title comes from one of the most popular and wistful songs of the era, evoking the longing of separated lovers. This is perhaps the only war film where the man must wait for the woman to come back, instead of the woman keeping the home fires burning waiting for the man. It is also, I think, except for various versions of A Christmas Carol, one of few Christmas films whose theme is redemption, the ultimate Christmas message.

Jacqueline T. Lynch is the author of Ann Blyth: Actress. Singer. Star. and Memories in Our Time - Hollywood Mirrors and Mimics the Twentieth Century. Her newspaper column on classic films, Silver Screen, Golden Memories is syndicated nationally.
Posted by Jacqueline T. Lynch at 7:58 AM

I saw this film for the first time about a year ago. It was a wonderful surprise. You described it so well! In tone it reminds me of another film I recently "discovered," REMEMBER THE NIGHT.

Thanks so much for your kind comment, Laura. It certainly is an oddball sort of film, but one that I find quite moving. It's interesting to see how many variations on the theme of separation that played out in these films during the World War II years.

This is in my top three of favorite Christmas movies. Everything that happens in it matters.

Welcome, lohwoman. I agree it's a very meaningful movie.

Laura, Remember the Night is one of my favorite holiday movies, one of the few that I make an annual effort to watch. Fred MacMurray and Barbara Stanwyck were such pros that they could create chemistry in a romantic holiday comedy and as doomed murderers in Double Indemnty. Wow!

A great (yet mostly forgotten) flick. Great review of it, too. Interesting note: George Cukor was called in to direct Shirley's tearful confession towards to the end to Ginger Rogers.

Hi Davelandweb, thanks for stopping by. I didn't know about George Cukor directing that scene, very interesting.