"Today's Headlines!" the ad above for 2001: A Space Odyssey announces, referring to the first moon walk by astronauts in July 1969.  Today we commemorate the enormity of the event, particularly for those of us who remember it, but also we look back at the movies playing at that time to see where America was, culturally, during that monumental moment when man first set foot on another celestial body outside the Earth. 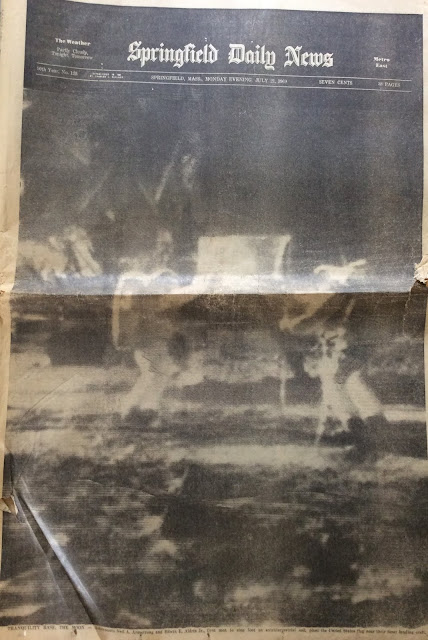 This wrinkled front page is from the newspaper my family read and which my mother saved from Monday, July 21, 1969.  As we can see by other front page newspapers below, the moon landing was the biggest news of the day -- of all time, we thought.  I especially love this front page of the Springfield (Massachusetts) Daily News because, unlike the other newspapers, there is no headline and no story -- just the dramatic fuzzy image of two astronauts and their lunar module craft on the moon.  No words were needed.  No words could adequately express our awe. 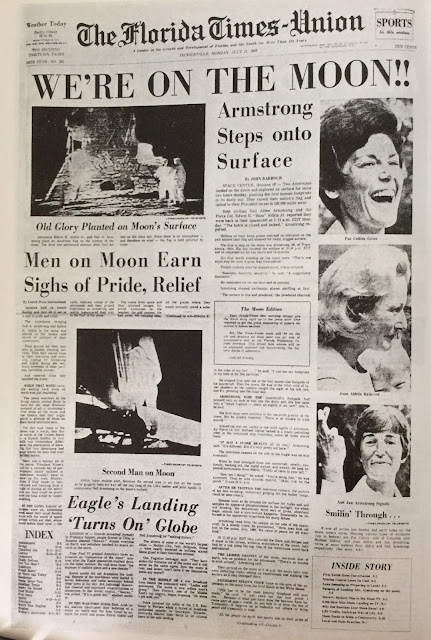 The astronauts were, of course, Neil A. Armstrong, the civilian commander, and Air Force Colonel Edwin E. "Buzz" Aldrin.  Air Force Lieutenant Colonel Michael Collins remained in the command vessel orbiting the moon, called Columbia.  The lunar module was the Eagle, as in those triumphant words, "The Eagle has landed!" 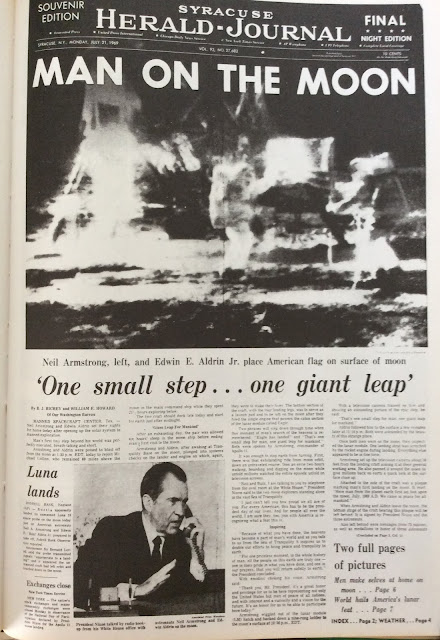 The mission was called Apollo 11 and the Saturn 5 rocket was launched July 16th. People all over the globe watched excitedly and followed the progress of the mission.  On Sunday the 20th, a little after 11 p.m. EDT, Neil Armstrong stepped off the ladder and onto the surface of the moon.

In commemorating that event, many will recall the inspiring pledge of President John F. Kennedy at the beginning of that decade that we would be on the moon by the end of the 1960s, and will recall a time when the  nation was more idealistic, more driven to setting technological and intellectual goals, and with a far more robust economy that would allow us to provide for the expenditure for such a space program.

Those of us who were children in those days recall watching the series of Gemini and Apollo flights on TV at home and even at school.  We had our space toys, and believing we would certainly have a Jetson's car when we were grown.

But from the standpoint of pop culture as it is expressed in the movies, have a look at what we were looking at in the drive-ins, the neighborhood movie houses, and the new cinema complexes in the summer of 1969...

We were really more interested in the 2001: A Space Odyssey above, or was the topical comedy How to Commit Marriage more appealing? We see that in the late sixties, stars of the Golden Age like James Stewart and Gregory Peck, Doris Day, Anthony Quinn and Sir Lawrence Olivier were still starring in feature films, often now alongside younger box office stars and apparently trying to adapt to new subject matter and to new audiences.  Bob Hope, Jackie Gleason, and Jane Wyman starred, and in the movie at the bottom of that ad, we see Bandelero! with James Stewart and Dean Martin paired with Raquel Welch.

In this ad, another theater carries How to Commit Marriage, and a drive-in is showing Bullitt with Steve McQueen.

We seemed to have a greater variety in movies at that time -- dramas, comedies, westerns, sci-fi, Shakespeare, and musicals -- and a wider variety of venues in which to see them. 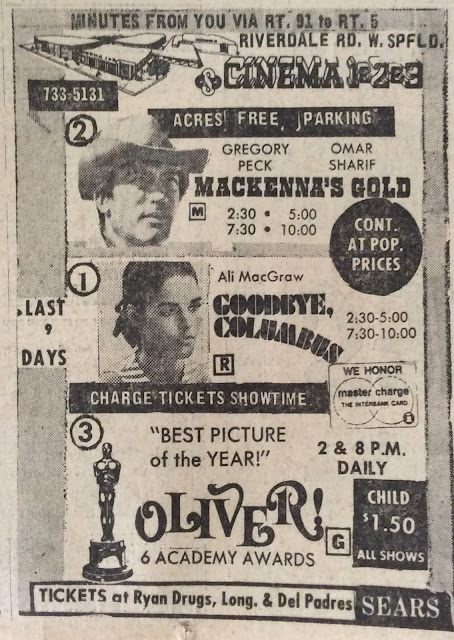 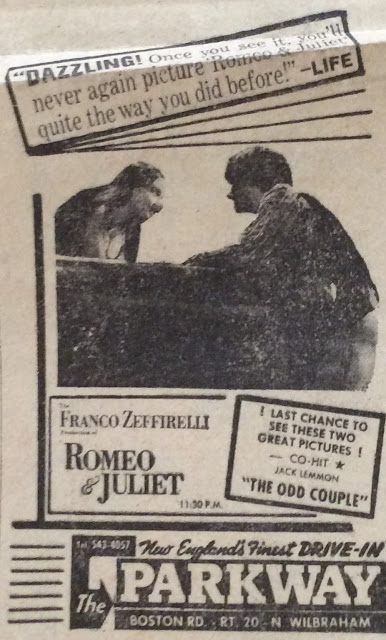 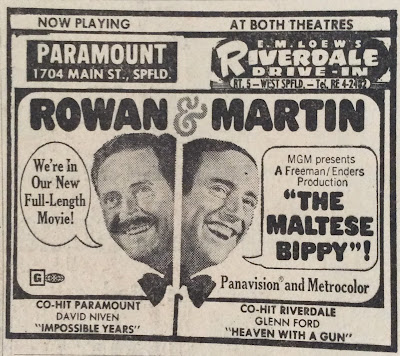 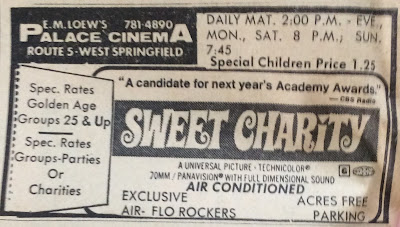 Note that the ad above stresses the theater is "air conditioned" and has "exclusive air-flo rockers."

If we were glued to the TV for those several days the astronauts were on their trip to the moon, the movie theaters might not have gotten as much business.  In the next decade, many of the theaters above would close. It might have been the last time that stars of classic films and contemporary actors would have equal footing in pop culture.
*********