Have a listen to my favorite Halloween tradition -- "The War of the Worlds" as heard on October 30, 1938 on the Mercury Theater radio program.  For more on the broadcast as it compared to the 1953 movie, have a look at this previous post.

Posted by Jacqueline T. Lynch at 9:08 AM No comments: Links to this post

Email ThisBlogThis!Share to TwitterShare to FacebookShare to Pinterest
Labels: Orson Welles, radio shows, The War of the Worlds 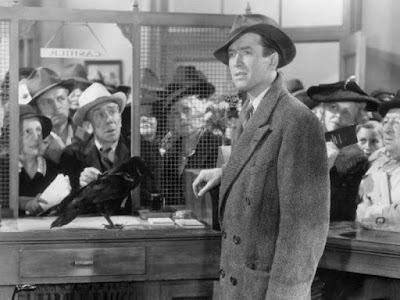 James Stewart's dazed expression at the panicked customers demanding all their deposits in the aftermath of the 1929 stock market crash speaks volumes to the audience who remembered the crash and lived through its aftermath.  His quick decision and energetic parceling out of meager funds saves the bank with two dollars to spare at closing time.  Today we mark the 90th anniversary of the 1929 stock market crash. 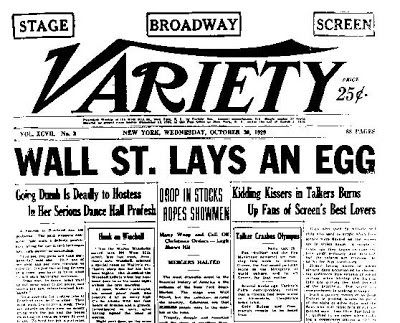 Many movies of the 1930s reflected and illustrated the Great Depression with unblinking frankness despite, as Mary Astor noted in her memoir Mary Astor--A Life on Film:


“These were the years called by the extravagant name of the Golden Years, maybe because nobody ever had it so good as the movie-makers.  In our fortress of films we were safe from dust bowls and grinding poverty, breadlines and alphabet agencies.”  (p. 109)

The buildup to the Crash was also extensively covered by Hollywood in its 1920s pre-Code party mode -- the vamps, the lascivious key-hole views of wild parties, and occasionally, a look at the even more wild spree on Wall Street.  The Marx Brothers capped the madness by adding more of their own in The Cocoanuts from 1929 a few months before the crash, which we covered in this post. 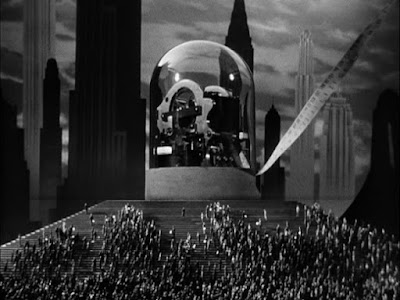 The Roaring Twenties (1939) attempts to cover it all -- the boom, the bust, the gangsters that appeared to usher the era in and out again, but takes the Crash with a clearly clichéd and nostalgic view.  It's easier to put a label on an event or an era when we are looking at it in the rearview mirror.  Here 90 years on from that event, from which we have only a few images of people swarming to the Stock Exchange when the panic began, we still dismiss it with a bemused and somewhat condescending eye.  We cannot imagine ourselves running to our local banks and screaming for our money, and not getting it (not all banks were so fortunate as to have George Bailey and his two dollars left).

We covered The Roaring Twenties here in this post -- ten years ago on the 80th anniversary of the Crash.  Have I really been writing this blog for twelve years?  We were coming down off a financial crisis then, ten years ago.  I have, I confess, feelings of more ominous foreboding for the one we're entering right now, but I can still take comfort in George Bailey's desperate and gusty response to a crisis. 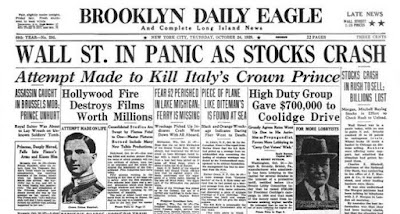 The timeline of the crisis that ultimately launched us into all those great Great Depression movies was this:

On Wednesday, October 23, 1929, the stock market fell about 4.6 percent, but rallied on Thursday the 24th in heavy trading.  Bankers stepped in and bought up shares, similarly to what the Fed is doing today, to prop up the market.  By Friday the 25th, the crisis seemed to have been averted. 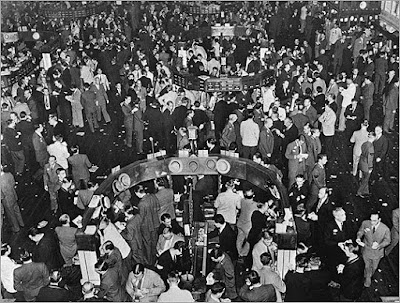 That event is what we like to peg the beginning of a new era, but the market did not actually stop falling.  It slid down a bit more through several months and did not actually hit its bottom until July 1932, when 90 percent of its 1929 value had been lost. 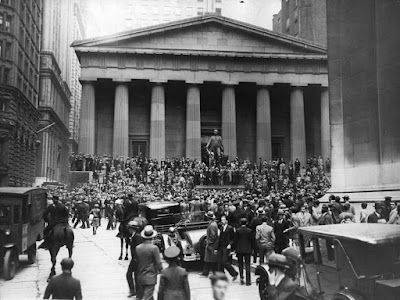 Of course, as devoted investors like to point out, if one had bought stocks in August 1932 and held them, they would be rich because the stock market went up after that.  Well, yes, but it did not reach its 1929 level until 1954 -- 25 years later.  Fine if you're young and bought in (not a whole lot of people had the money, let alone confidence in Wall Street, to buy stocks in the depths of the Depression), but if one was middle-aged or a senior, the ball game was over.  What was lost was never to be recouped. 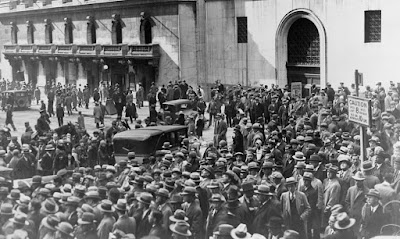 History, as is said, does not repeat itself, but it often rhymes, in a quote often attributed to Mark Twain.  I like to take a lesson from charts and graphs, from the testimony of people who experienced an event -- and from George Bailey, who always seemed to be behind the 8-ball but who thought fast and stayed on his feet.

May we all be here in ten years, marking the 100th anniversary of the start of the Sound Era with curious, bemused, and somewhat condescending commemorations of the Crash of 1929.

**************
Jacqueline T. Lynch is the author of Ann Blyth: Actress. Singer. Star. and Memories in Our Time - Hollywood Mirrors and Mimics the Twentieth Century. Her newspaper column on classic films, Silver Screen, Golden Memories is syndicated nationally.
Posted by Jacqueline T. Lynch at 10:01 AM 4 comments: Links to this post