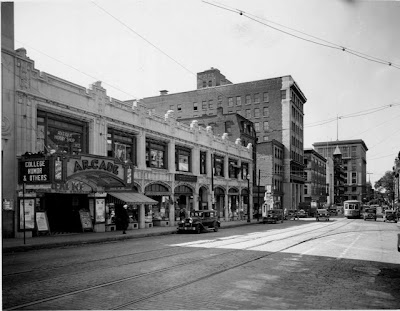 This is the Arcade Theater in Springfield, Massachusetts. I think it must be 1933, you can see the marquee listing “College Humor” which was released that summer. Bing Crosby, George Burns and Gracie Allen, and our old pal Grady Sutton.

The theater was on lower State Street. The trolley ran all the way up the hill and out to the residential neighborhoods. The Springfield Armory is up that hill. George Washington established it after scouting the site himself, Dan Shays and his men attacked it, and its skilled machinists helped save the Union during the Civil War, smashed the Axis in World War II. It’s a National Park, now.

You can’t see all the ghosts that walk this street in the photo. You just see the old Fords and trolley tracks. And now, they are ghosts.

It was a “second run” theater in its day, opened for business in 1931. You can see by the ad that Maurice Chevalier got things going with “The Smiling Lieutenant” (1931). Claudette Colbert, directed by Ernst Lubitsch.

According to the Cinema Treasures website, the theater accommodated over 1,000 patrons, even with no balcony. I first heard about it from family members who used to go there.

The Arcade closed in 1971, and was demolished in 1972 to make way for the Springfield Civic Center. That rather ugly cement colossus is now a renovated arena and convention center called the MassMutual Center. The Springfield Falcons hockey team play here. They need a lot of room, more than Bing Crosby or Ernst Lubitsch.

Have a look at the Cinema Treasures website not only for information on historical movie theaters, but for the comments readers contribute with their own memories.  Look up an  old theater you remember, and you may find others remember it, too.

Posted by Jacqueline T. Lynch at 8:17 AM

Welcome, Tom. Thanks for stopping by. Too bad we don't get 2nd features anymore, or cartoons or shorts.

I don't suppose the trolley is still there, is it? If it connects the downtown with the residential neighborhoods, it would be a valuable thing to have, even today. Especially today.

Hi, Rich. Sadly, the trolley runs no more. As with a lot of towns and cities in the northeast, the trolleys were discarded in the early 1940s. There is a nice Trolley Museum not too far away in East Windsor, CT. You're right, it would be a good thing to have today.