The Oriental Theatre in downtown Chicago now hosts live musical theatre productions, but it started out as a grand movie palace. It has a special place in the history of classic films for two other footnotes. In “Auntie Mame” (1958) the shocked faithful servant Nora brings little Patrick, fresh from Chicago, to his Auntie Mame’s custody and discovers the entryway to her apartment festooned with burning incense and a bas relief dragon on the door. She remarks, “Like the ladies’ restroom in the Oriental Theatre!”

The Oriental Theatre also gave us “Judy Garland”. It was here in 1934 on the vaudeville circuit young Judy and her sisters, then still called the Gumm Sisters, arrived to see their names on the marquee misspelled, again. This time they were called The Glum Sisters. Audiences, met with funny variations on the name, often mistook their harmony singing for a comedy act. Comedian George Jessel intervened at this moment and suggested they change their surname to “Garland”.

The Oriental, with its Asian-themed décor, was an opulent menagerie of large seahorses and goddesses under a domed ceiling. It was built in 1926, replacing the doomed Iroquois Theatre (later Colonial), which had suffered the tragic 1903 fire in which several hundred lives were lost. 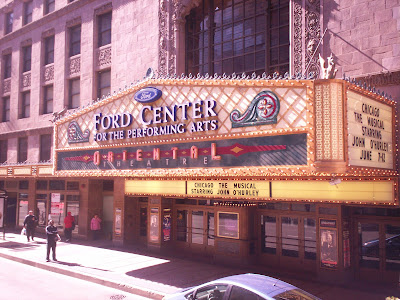 The timeline for the Oriental follows a similar pattern of other great downtown movie palaces -- its heyday in the 1930s and 1940s, and then a decline in the 1970s. It was closed in 1981 and left vacant until the early 1990s when plans were underway to restore the theater. It reopened in 1998. Listed on the National Register of Historic Places, it is now called The Ford Center for the Performing Arts Oriental Theatre. For more on the Oriental, have a look here.

"A Garland of Roses for Judy" article by Hedda Hopper, syndcated in The Pittsburgh Press, December 17, 1944.

Posted by Jacqueline T. Lynch at 8:33 AM

I always find coming to your blog to be absolutly riviting! As soon as I saw the display picture I instantly thought of "Nora" in A.M.! I also had never heard of the Iroquois Theatre so naturally I looked it up mid read through your post. How horrifically tragic and entrancing, and my how far we have come since.

Thanks so much, Mick. You're very kind. Yes, poor old Nora. I love her.

As for the old Iroquois, we've come a long way in safety standards when it comes to the construction of public buildings, but we suffer a danger they did not back in those days. We must now worry about creeps with automatic weapons.

Nice post. I've been to the Oriental many times to see live productions, and it is gorgeous. What a change from the modern, somewhat cookie-cutter movie theaters we have now.

Thanks filmboy. I envy you seeing a show here. I agree the cookie-cutter movie theaters of today are pretty dismal.

Jacqueline, I have a soft, soft spot in my heart for the movie palaces of old and it's always a pleasure to learn of another that survived the '70s and lived to see a new day. Loved learning about Chicago's Oriental. Not long ago I read a detailed piece (somewhere) on the terrible Iroquois fire - brought to mind the "Titanic" tragedy for many reasons. Like the Titanic the theater was very new, there were structural and safety inadequacies, it was billed as "absolutely fireproof" (recalling the Titanic's reputation as "unsinkable") the loss of life was enormous and building/safety standards changed in wake of the disaster.

Hi, Lady Eve. I'm with you on the sentiment over old movie palaces. I agree the previous Iroquois tragedy had a lot of similarities to "Titanic", accidents compounded by human error over safety standards.