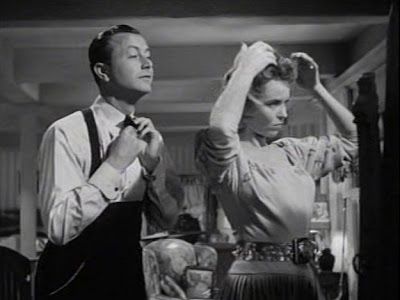 Claudia and David (1946) takes us four years later into the marriage of Dorothy McGuire and Robert Young, first paired in Claudia (1943) discussed here on Monday. It’s an unusually successful sequel, partly because of the consistent excellence of McGuire and Young in the roles, and partly because the story, with a host of new characters, stands on its own.

Just as with my post on Claudia, I’m going to throw out spoilers here and there like the Easter bunny scattering eggs. Proceed with caution. 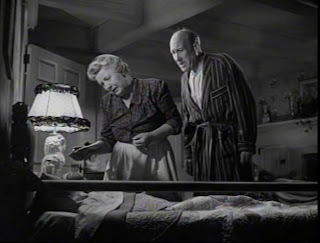 Elsa Janssen and Frank Twedell are back as their live-in servants, but Walter Lang is the new director at the helm. His style is less pensive and intimate than Edmund Goulding’s was on Claudia, but the film does not suffer for it. It has a broader scope, takes us outside into the community, long drives on rural Connecticut highways, and the homes of their friends. No longer is the ramshackle farmhouse an island unto itself.

And it has electricity now. 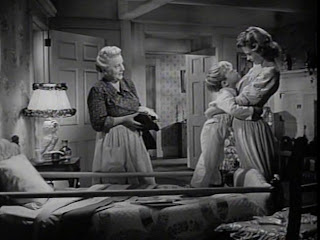 The baby McGuire was expecting at the end of Claudia is now a three-year-old boy, played by the adorable Anthony Sydes. Just as she clung too much to her mother in Claudia, here McGuire clings too much and too possessively to her son.

That, and their friendships with the opposite sex are the new challenges to their marriage.

We learn more about Young’s work as an architect. He plans to travel to a professional convention. McGuire doesn’t want him to go alone, and doesn’t want to go with him, either, and leave their son. She frets over every act of her husband’s independence. She mourns her lack of sophistication as they dress for a dinner party. 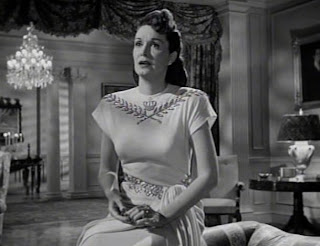 Young’s high society sister, played by the glamorous Gail Patrick, has invited a group of neighbors to her home, none of whom know each other very well.  Miss Patrick, always a pleasure to find in the cast of any movie, was nearing the end of her film career with only a few more after Claudia and David.  Unfortunately , she doesn't have much to do except lend the cachet of her own splendid elegance. 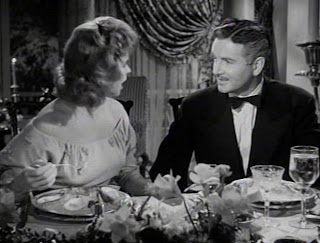 John Sutton is Miss McGuire’s dinner companion, who sneaks his oysters to her as they make fast friends. Rose Hobart, who we last saw here in Conflict (1946) as the severe wife of Humphrey Bogart is here the severe wife of John Sutton. Their marriage is a bit rocky as they are growing apart after the loss of their son. Miss Hobart obsesses over her child’s death, and tries to find consolation attempting to contact him through psychics. 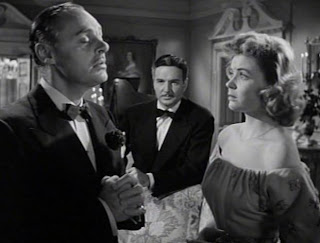 Jerome Cowan, who I love to pick out in so many supporting roles, plays a phony psychic at the dinner party. 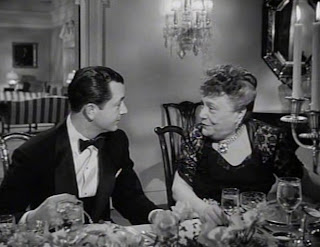 The wonderfully pompous Florence Bates, another favorite in the stable of character actors, is his champion who swears by him. He warns McGuire of a dire accident to come. 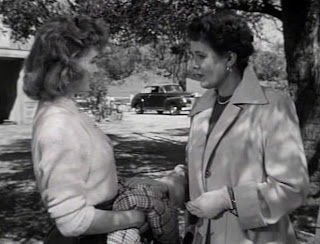 Mary Astor plays a newcomer to the neighborhood, a widow with a young daughter, who wants Robert Young to design a new house and barn on her property. They hit it on very well from the start, which will cause Miss McGuire a great deal of jealousy.

The movie, in a gentle and smooth way, debunks the traditional Hollywood idea of a “happily-ever-after” in marriage. Here, all the married couples must work at their marriages if they want to keep them.

The dinner party scene is especially intriguing, because we have all the principle characters together, and the camera can pause on different groupings and individuals as we drift in and out of conversations. The characters we don’t know well are all neatly established for us in a few minutes.

Mary Astor had already started playing mothers of grown, more glamorous, children, and the dowager parts were coming soon.  Just as with Gail Patrick, Claudia and David lets us see Miss Astor one more time as elegant and provactive. In her excellent memoir on her film career, Mary Astor - A Life on Film (NY: Delacorte Press, 1971, pp. 190-191), Mary Astor recounts her work in this film, with special emphasis on the consequences of the dinner party scene.

There was a big formal dinner…quite a long episode with a lot of dialogue. I think it was two or three days’ work. Table scenes are difficult, technically. People can’t be moved around, there are cross cuts, you are attached to the table. It’s a lighting and camera problem mainly, and takes time. 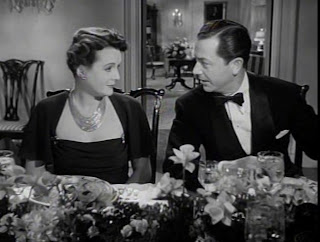 The first course—and only course…was oysters. Lovely fresh bluepoints on the half shell served on an iced plate with the usual accompaniments…The first day we were all delighted with the excellence of the oysters that the studio had provided us…The first two shot you spear an oyster, dip it into the sauce and swallow it quickly in time for whatever it is you have to say. While the other person is speaking, you have time to eat another, or to wipe your lips with a napkin. But, careful! It has to match: You ate an oyster at that point in the establishing shot!

No lunch that day. Just, “I think I’ll like down during lunch hour.”

After three days of eating nothing but oysters and crackers, the body rebels…Dorothy and I had the longest scenes, the most close-ups—and in spite of frequent visits to the ladies’ room, we both looked rather pale and wan in the sequence that followed…

Just as in the first movie, Claudia’s challenge is become more emotionally mature. She deals, awkwardly if earnestly, with her jealousy over Mr. Young’s attentions to Mary Astor, and in turn, she must comfort Rose Hobart, who is jealous over McGuire’s relationship with John Sutton. Sutton, in a friendly though perhaps unwise gesture, sends Dorothy McGuire a dozen white roses. 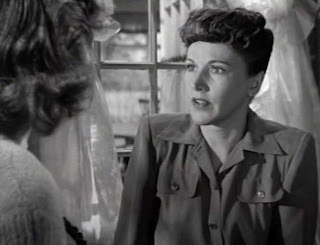 Miss Hobart, in a moving scene, recalls that her husband gave her white roses only three times in her life: when they were married, when their son was born…and as consolation just after he died.

Seeing Hobart’s faults in herself, McGuire is determined not to be jealous and  tells Young, “Don’t let’s ever fight again.”

He replies, with his usual sense, “Well, that’s a tall order, but I’d rather have you fight back than be one of those noble women.” Regarding his friendship with Miss Astor, “Do you think marriage means the beginning and end of all human contact?”

McGuire’s mother, who died in Claudia is mentioned here on a few different occasions in a nice bit of continuity, and serves as a reminder to McGuire to not cling too tightly to those she loves. 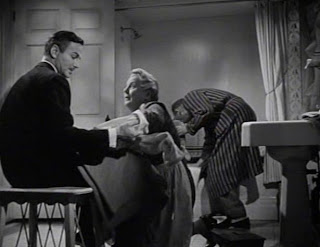 Just as in the first movie, this one has two very grave episodes that add surprising depth. The first is when their little boy comes down with measles. John Sutton brings Dorothy McGuire home from the house party and they find the child unconscious with a fever-induced seizure. Sutton, with the help of the servants, takes over and helps undress the boy and put him in a tub of water. 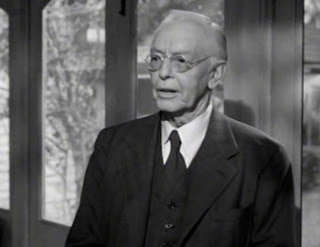 The doctor is another favorite character actor, Harry Davenport. 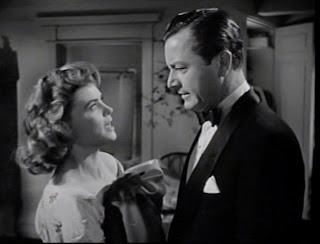 When Robert Young returns home late to the commotion, he graciously thanks Sutton for taking his place, then angrily confronts his wife for not calling him and becomes jealous himself.

The second potential tragedy happens during preparations for their own dinner party. As McGuire gets ready to dress, they get word that Young has been involved in an auto accident. 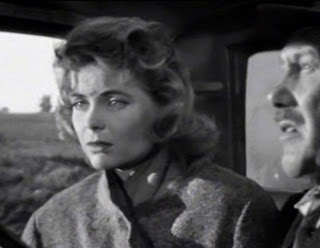 Elsa Janssen holds the fort while her husband, Frank Twedell, drives McGuire to Doc Davenport’s office, where the unconscious Young has been moved. In a striking scene, really brutal despite its simplicity, we see the viewpoint out the car window as they come upon the highway accident scene. 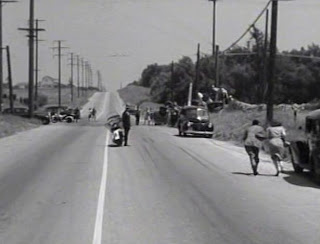 A cop directs traffic. Rubberneckers begin to swarm. Two cars are wrecked. One is Robert Young’s. It’s completely upside down. 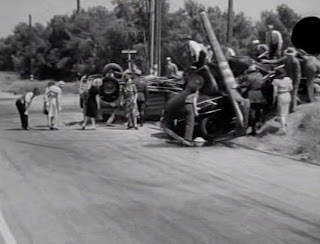 We pass it slowly. The camera is mesmerized by it, and so are we. McGuire and Twedell exchange no conversation; we can almost sense her heart in her mouth. 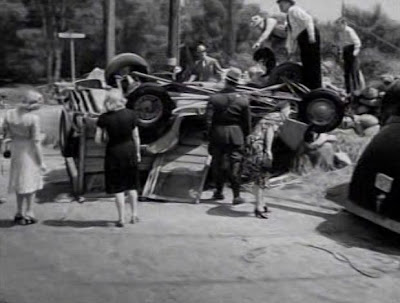 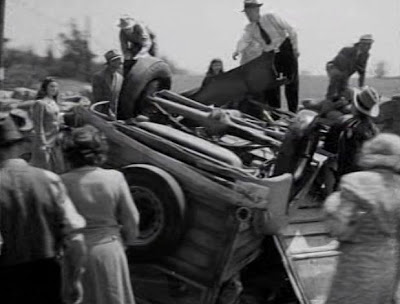 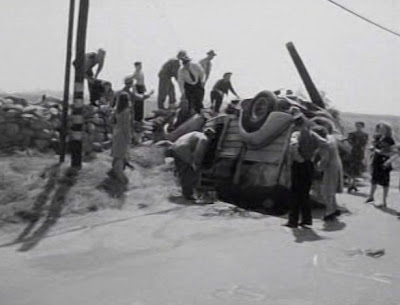 Later, after Robert Young has been transported to the hospital and they await a call, McGuire must endure the horror of a house full of guests. They are the same Hobart and Sutton, Gail Patrick and her husband, and Mary Astor, but now they are no longer strangers and wait out the long night together. They have all been through a trial by fire, in their own marriages and in their friendships with each other. Astor, aware she has inspired jealousy in McGuire, delicately helps her to dress.  When Dorothy McGuire leaves the party to visit Young in the hospital, Rose Hobart, no longer jealous, magnanimously suggests to her husband that he drive her. 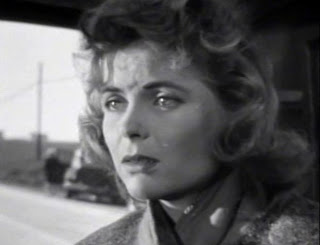 Claudia and David could have led to further adventures, but by this time Dorothy McGuire was eager to move beyond the scatterbrained wife roles. Finding challenging material to equal her prodigious talent would be a problem for the remainder of her career, more than just the common complaint of actors of being typecast. Hedda Hopper, syndicated in the Toledo Blade, August 7, 1946 wryly noted, “Dorothy McGuire got caught in her own web of excellence.”


Jacqueline T. Lynch is the author of Ann Blyth: Actress. Singer. Star. and Memories in Our Time - Hollywood Mirrors and Mimics the Twentieth Century. Her newspaper column on classic films, Silver Screen, Golden Memories is syndicated nationally.
Posted by Jacqueline T. Lynch at 7:44 AM

Mary Astor is an especial favorite, would love to see her as SOTM on TCM.

Thank you, knitwit. I like Mary Astor, too. I don't know if she's ever been star of the month on TCM, but she deserves it.

I am not familiar with this series but it sounds terrific thanks to your review. With that cast, too ... I will definitely look for it.

Thanks Classicfilmboy, and I hope you can find these movies soon. Definitely a cut above the average frothy domestic comedies.