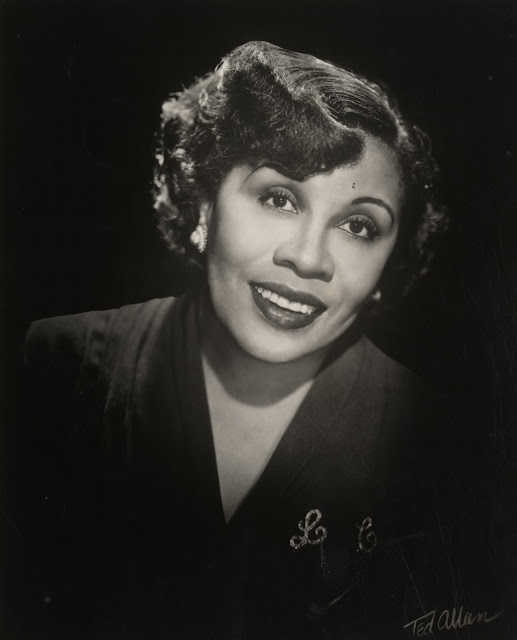 Lillian Randolph must have been a warm and lovely lady, for there is something in her portrayals that goes beyond talent and is supercharged by perhaps empathy or a deep sense of knowing.  She is instantly relatable and somehow more genuine than the stars she supports. 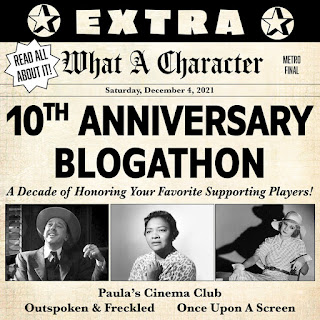 Taking a break from the Christmas series today to join in on the 10th Annual What a Character Blogathon hosted by Kellee of Outspoken & Freckled, Paula of Paula’s Cinema Club, and Aurora of Once Upon a Screen.  Stop by any of their blogs for a full list of great bloggers participating in this wonderful event that celebrates our cherished character actors. 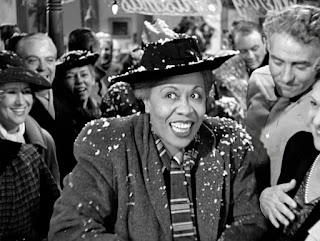 Likely, most classic film buffs are familiar with Lillian Randolph’s brief role as the cook and housekeeper Annie in It’s a Wonderful Life (1946).  When George Bailey is down and out, she laughingly donates her life savings to him, money she was saving for a divorce in case she ever got married.

As with African-American actors of the day, Miss Randolph spent most of her career playing domestic servants, and that was unfair, but in her talented grip, not a tragedy.  She made these characters interesting and threw her whole self into them. 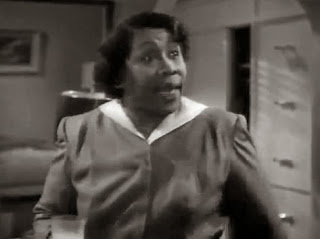 We discussed her role in the comedy Once More, My Darling (1949) here in this previous post.  The movie stars Ann Blyth and Robert Montgomery as a pair of eccentric misfits, and Lillian Randolph is the maid of Montgomery’s wealthy mother, the only person in a house of sophisticates who understands ditzy Ann Blyth and supports her with bemused fascination.  Quoting just from a bit of that essay:

"The only one she connects with is Mamie, the maid, wonderfully played by Lillian Randolph.  Miss Randolph has a stronger role in this film than most domestics, and not stereotyped.  She has a personality of her own, and is clearly amused and delighted with Ann.  She seems to be the only one who is not repelled by her perfume."

While it is true that the Black servants of the movie world were stereotypes, as noted above, Lillian Randolph never played them that way.  She seemed to understand them as personalities and to get a kick out the roles she played. There is sense of joy in her work.

She began in radio, and her work stretched across many decades through film, television, and suppled the voice for the now notorious Mammy Two-Shoes in several Tom and Jerry cartoons. 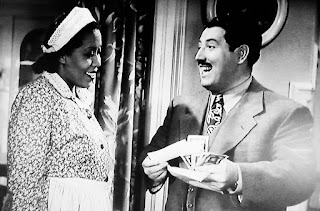 Blessed with a gloriously rich contralto singing voice, she also performed as a blues singer. We can hear her sing in several episodes the long-running radio comedy The Great Gildersleeve.  As the cook and housekeeper Birdie, Miss Randolph was a mainstay of the house, really a main character in the family of bumbling bachelor Gildersleeve and his niece and nephew.  As the series progressed, she was more like the counterpart of Gildersleeve.  They were not spouses, but they were domestic partners in running the house and raising the children in every other sense. The Gildersleeve series later became adapted for television and a few movies.

Have a listen here to the Easter 1952 radio episode where Lillian Randolph sings “Were You There When They Crucified My Lord?”  beginning about 23:02.  (We discussed her Gildersleeve co-star, Walter Tetley, in this previous post.)

In another episode, Birdie’s singing talent is discovered by a visiting impresario, and he wants to send her away to study voice, Randolph sings “Goin’ Home” at about 10:54 and reprises the song later in the show.  It is a stirring, beautiful piece. (Her daughter Barbara Randolph also became a singer.)  She would also sing the “Coventry Carol” on many Gildersleeve Christmas episodes.  She recorded “Were You There” also in 1956 on a 45-rpm record.  Later on in life she reportedly taught acting, singing, and public speaking. 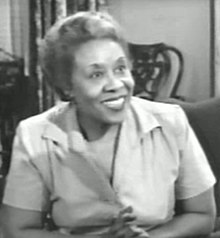 “What a fine woman!” Gildersleeve remarks of Birdie, and in an era where African-American performers were relegated to playing characters that were not often afforded much dignity, Lillian Randolph’s appealing and loveable personality, her vibrancy, silliness, and canny playing off her castmates made her a star in her scenes if not on the marquee.

Posted by Jacqueline T. Lynch at 8:28 AM

Email ThisBlogThis!Share to TwitterShare to FacebookShare to Pinterest
Labels: blogathon, It's a Wonderful Life, Lillian Randolph, Once More My Darling, radio shows, The Great Gildersleeve

A lovely tribute to Miss Randolph. She deserves a lot of admiration.

Around Christmas I find myself turning to the fun of radio Gildersleeves. Could it be Birdie's singing? Yes, but it is also the good-natured humor of the program and its stars that enlivens my baking and gift wrapping.

You too? I've also listened to the Gildersleeves when wrapping, and even when it's not Christmas, I sometimes listen to them when I'm cooking supper. Radio has a way of freeing us to do other stuff. When you put on the TV to listen to something when you're busy, you inevitably have to sit and watch something that grabs your attention. TV makes you a slave. Radio gives wings to your imagination.

The Mammy character from TOM & JERRY might’ve been whitewashed by the time I started watching it, so I probably never saw it as it was originally presented until I was much older. Still, it’s good to know her voice actress had as successful a career in old Hollywood as possible for a black woman.

She certainly had a long career in lots of different media. Birdie is my favorite character on the Gildersleeve show.

I'm hanging in there. Glad you're still sticking with the novel. You'll get there.

She is fabulous, and I can't get enough of her. I've been listening to The Great Gildersleeve on Sirius radio, and she is absolutely the best part of the show. So glad you paid tribute to her.

Such a warm and loving post. And yes - joy is the word that perfectly describes what she brings to the party.

Ruth, I'm so glad others have discovered The Great Gildersleeve. Everybody on that show gets good lines and a chance to shine, and they make me bust out laughing. Except for Marjorie, who has the job as "straight-man" usually, but I agree that Lillian Randolph is fabulous.

Thank you so much, FlickChick. It's a wonderful blogathon to allow us to share what we love about these less famous performers.