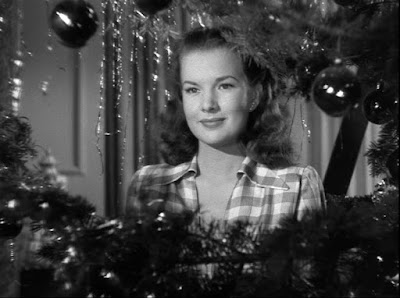 It Happened on 5th Avenue (1947) is a pleasant romantic comedy that tackles the problems of two couples of different generations, the post-World War II housing shortage, juggles tropes of the happy hobo, and the millionaire who needs to get back in touch with the common man, throw in a couple songs even though it’s not a musical – and Christmas.  This last element is not the focus of the movie, and that, as we have mentioned in the earlier movies of this series, is what makes this film an appealing adventure. 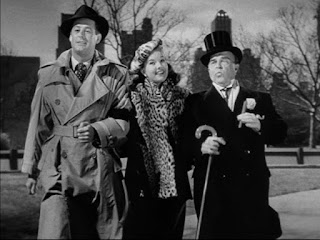 We’re back in New York City, the location for Fitzwilly (1967), The Lemon Drop Kid (1951), and one of the fun points of this movie is several rear-screen projection scenes of New York.  I don’t know about you, but I like rear-screen projection. I wish it followed me around, too.  I could run a marathon without going anywhere. The setting here is a mansion on Fifth Avenue, which, in the seasonal absence of its owners, is occupied temporarily by hobo Victor Moore, who has sneaked inside for the past few years and knows the ropes of how to live well by being an undiscovered guest. 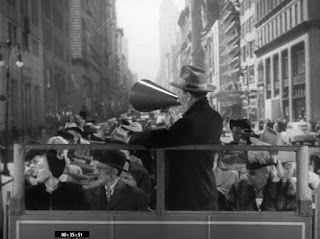 He meets newly homeless Don DeFore, who has been evicted from his rattrap boarding house that’s about to be torn down, and invites him to stay a while in the mansion until he gets back on his feet. Gale Storm sneaks into the mansion, too, but she is actually the daughter of the millionaire who owns it. Miss Storm is fresh-faced and sweet (but unfortunately, her singing here is dubbed).  She’s on the lam from her finishing school, just stopped back to pack some of her clothes—when the disapproving and ultra-moral Victor Moore catches her in the act.  He and DeFore decide to give the young reprobate another chance, since she pleads with them that she needed the nice clothes to apply for a job.  She doesn’t want them to know who she is, because her dad and the media are looking for her.  This is the start of the happy makeshift family. 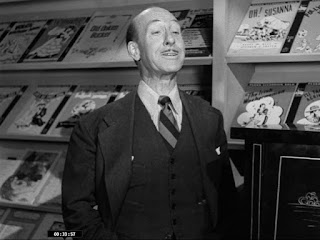 Catch the sheet music “Oh, Susana!” where Gale applies for a job in a music store, which makes me think of her television series Oh, Susana! in the late 1950s.  We discussed David C. Tucker’s book on Gale Storm here and here in these previous posts. 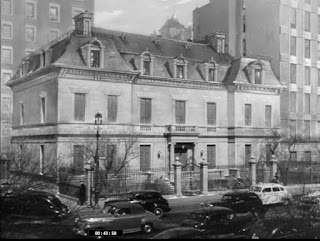 Soon, they will be joined by a couple of DeFore’s old Army buddies and their wives and kids.  (Our hero Charles Lane has a brief role as a landlord who doesn’t allow children.) Alan Hale, Jr., is paired with Dorothea Kent.  Mr. Moore is a little nervous about inviting too many people in the house.  For one, he obviously does not want to risk discovery by the nightly patrol of police who check on the house, and also, he’s afraid his merry band does not respect the house as he does.  Moore is a pretentious hobo.  He dresses in the master’s clothes, smokes his cigars, and expects the people in “his” household to fall under his command.  They share the chores and the childrearing between them. 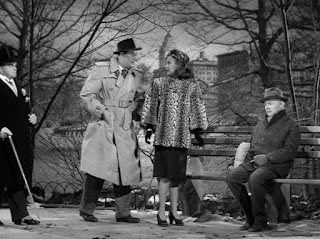 When Gale Storm’s father tracks her down, she persuades him to pose as a vagrant who needs a place to stay, and invites him into the house.  Charles Ruggles is the indignant, sputtering millionaire, who actually started life in poverty and worked his way up.  He is a self-made man, and his considerable pride in being so is shattered at every turn by the dismissive Victor Moore, who lords it over him and expects Mr. Ruggles to toe the line. 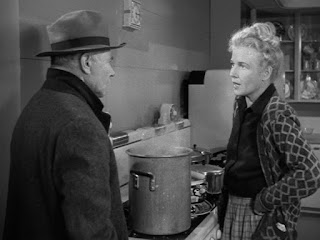 Ruggles suffers the comic indignity for his daughter’s sake: she has fallen in love with Don DeFore but wants to know if he can love her for herself and not her father’s millions.  Gale Storm also invites her mother to join the “family” and introduces her as a likewise down-and-out soul.  Victor Moore puts her to work as the cook. 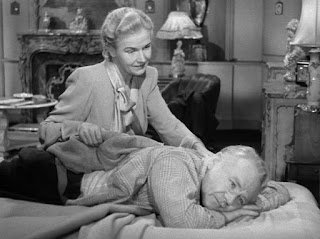 Played by the lovely and ethereal Ann Harding, she and Charles Ruggles are divorced and have not seen each other in some years.  Her bemused expressions at seeing Charles set down time and again by Victor Moore are funny and darling, but we soon have tandem rocky love stories:  Gale Storm and Don DeFore who are just discovering each other, and the sadder-but-wiser reunion of Ann Harding and Ruggles.  It is touching that they must fall in love all over again. 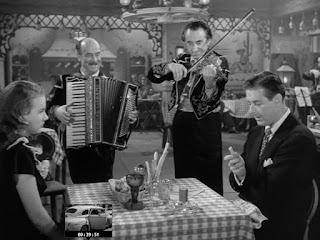 Leon Belasco, who we discussed in this previous post, has a minor role as a musician in a restaurant. It's all about the character actors. Ask any old movie buff.

Ultimately, this is a tale about home and what makes a home.  Ruggles’ opulent mansion is empty half the year and when he’s in residence, it’s just him and probably a few servants.  His daughter lives at her finishing school, his ex-wife in a posh hotel in Florida.

DeFore and his pals are veterans looking for suitable housing, and they have a partnership in the works to bid on an Army camp the government is selling, hoping to renovate the barracks into two-room apartments for veterans like themselves without a place to live.  Little do they know that their rival bidder is property developer Charles Ruggles.

Victor Moore’s home is not necessarily anyplace he hangs his hat: he’s clearly choosy about his domicile and has expensive tastes.  Ruggles eventually reveals his true identity to the boys, but not to Mr. Moore.  His innocence is to be respected. 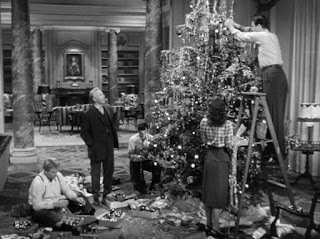 Christmas comes, and if the holiday is all about family, it is also all about home.  Home for the holidays.  The "family" decorates an enormous tree.  A few fun shots are of dialogue carried on between the branches, this and other whimsical touches by director Roy Del Ruth made this film quite charming.  Despite the Christmas scene, this classic film seems to have come late into the Christmas roster, possibly because it was not shown on TV for many years, but now, of course, is available on DVD and usually part of December programming on TCM. 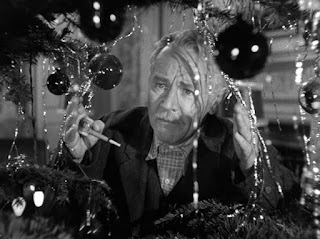 The ideal Christmas is centered around home.  The holiday, ideally, solidifies a family, and then as suddenly as it came, it leaves.  The family leaves.  Both the home and the family can be temporary Christmas endeavors, attached to the holiday that attracts us every year like homing pigeons.  Charles Ruggles leaves us with a last line to infer that he fully expects Victor Moore to return next year, and he will be welcome.  We don't know if Ruggles means he will pretend to be a homeless man again for Moore's sake, once more suffering his largesse.  That is the biggest conundrum for us: we want our nostalgic family Christmases to never change and we try to replicate the rituals every year, but eventually, that becomes impossible.
Except in home movies and classic films, where the universe we loved is still there, unchanged, waiting for us.

Posted by Jacqueline T. Lynch at 9:08 AM

It Happened on 5th Avenue is indeed a charmer. I just need to think about Charlie Ruggles trying to make a bed and a severe case of giggle-itis descends.

Why - oh, why in the name of all that is sensible would they dub Gale Storm?

According to Mr. Tucker's book on Gale Storm, it was the director's decision, and she was not happy with him about that. Hollywood's weird habit of sometimes dubbing actors who could actually sing quite well is indeed baffling.