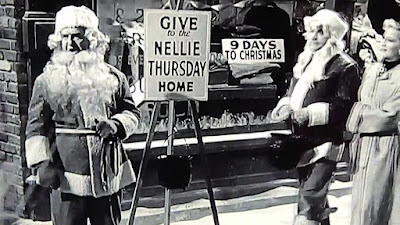 The Lemon Drop Kid (1951) is primarily known for giving us the Christmas song “Silver Bells.”  It sometimes happens that songs from films become hits, but reportedly, the composers Jay Livingston and Ray Evans did not really expect the song to become a perennial favorite.  Somebody, perhaps with Damon Runyon smiling down on them from heaven, played a hunch and put the song during the opening credits, used it as a leitmotif in sentimental moments, and gave it the big production number that even today, in an enjoyable but otherwise unremarkable comedy, warms the heart and brings a great big smile.

The song’s first verse is sung by William Frawley, a New York City gangster dressed as a dubious street corner Santa Claus.  Bob Hope and Marilyn Maxwell take it from there (Bob also dressed as Santa), and they stroll the backlot city through gently falling snow, smoothly avoiding large automobiles as they cross streets with a throng of pedestrians.  It’s an idyllic New York City, and for a moment we believe, if not necessarily in Santa, then certainly in Damon Runyon’s world of comical and sentimental mobsters who are really nice underneath their bad English and bad habits.  Runyonesque is word for which most writers have to tip their Fedoras to Mr. Runyon; most of us do not get descriptive styles named for us.

The movie had also been filmed in 1934, and William Frawley has the distinction of being in both of them.  However, the 1934 version, which was actually co-written by Damon Runyon, bears little resemblance to the 1951 movie.  Both feature a racetrack tout stumbling over various schemes to come out on top, but the 1951 version is more upbeat. 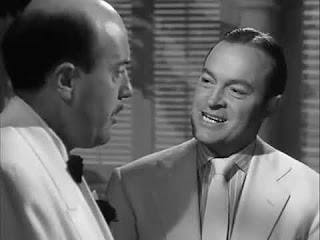 Bob Hope flees a racetrack in sunny Florida to escape a mobster after him, and lands in his home turf of New York City, desperately looking for a way to raise cash to pay off the gangster by Christmas Eve, or he will be fitted for cement shoes. 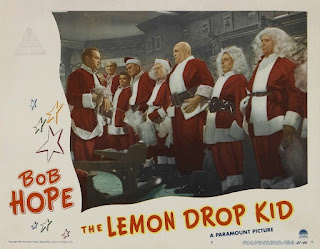 His disgusted girlfriend, played by Marilyn Maxwell, does not have that kind of dough, but she helps him in a farce he has devised to save his bacon.  He gathers the forlorn elderly ladies of the neighborhood, led by homeless Jane Darwell as Nellie Thursday, and puts them in the mobster’s closed casino, calls it a home for elderly ladies, and gets a license to operate as a charity.  He gathers all the hoods and pickpockets and ne’er to wells in town and enlists them to stand on street corners as Santa and collect money, he says for the home – the boys owe a lot to the warmhearted Jane Darwell who’s always helping them out – but Bob really plans to turn the money over to the Florida gangster to save his own neck.  His rival in town, played by Lloyd Nolan, is his biggest obstacle to success. 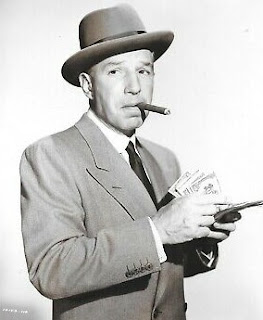 We don’t really worry about Bob; he can take care of himself.  It’s hard to keep track of all his lies and tricks, but he manages to scrape by in the nick of time.  The dialogue is fast and witty.

I find myself craving lemon drops watching the movie, however, because Mr. Hope keeps  popping them, hence his moniker. 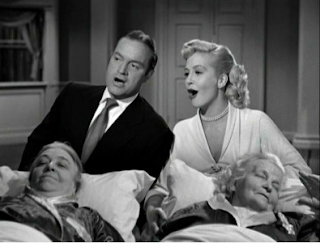 Another song in the movie is sung by Bob and Marilyn Maxwell as a lullaby to the old ladies, and its lyrics are quite clever and charming.  “It Doesn’t Cost a Dime to Dream,” is breezy, fun, and another great moment in the film. 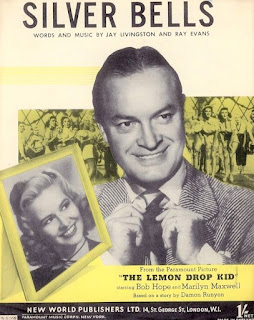 But “Silver Bells” which has been recorded by pretty much everybody who can sing, has stood the test of time.  It is conjures a nostalgic image of window-shopping on a wintry street, of “the downtown” where we used to go for Christmas shopping, of “the city” when it was filled with friendly pedestrians, and the anticipation “soon it will be Christmas day” of the coming festivities.  Are they bells rung by street corner Santas?  Or church bells?  Or sleigh bells?  Or the little bells that used to ring over the door when you entered a shop? 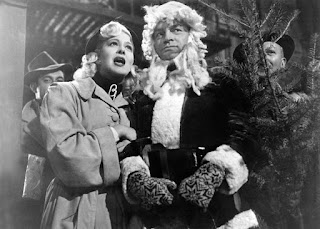 The charm of the song is its simplicity, and it is perhaps the simple images in our memories of how we think about an old-fashioned Christmas that really makes the holiday for us.  An “old-fashioned Christmas” is what you make it; it can be images of Victorian England, or the 1930s and 1940s hometowns of our classic films, and these images sometimes we blend with memories of our own experiences in Christmases past: the 1950s, the 1960s, the 1970s, the 1980s…someday someone is going to be nostalgic about going to freestanding Walmart for Christmas, the way someone else today, right now even, is feeling nostalgic about going to a 1970s mall.  Silver Bells.  It’s Christmastime in the city.  Even if you’re nowhere near a crosswalk.

I wonder if anyone will ever write a lovely, nostalgic Christmas song about ordering presents from Amazon on your iPhone?

I read the Runyon story and found it kind of depressing. It's definitely nothing like this film, except maybe for the lemon drops! This film is a holiday favorite of mine, for "Silver Bells" and the home for "Old Dolls" and William Frawley's sort-of-Santa. I also like that the Kid's girlfriend is called Brains! (Although it kind of spoiled it for me when I read somewhere that Maxwell was Hope's longtime mistress, whether it was true or not.) I always had a hard time finding the film. Is it on DVD now?

Welcome, Marty. The original movie from 1934 is a bit closer to the short story. I think the 1951 movie is available on DVD.

I always enjoy a Bob Hope movie this time of year. I like to end and begin things with laughs.

The Lemon Drop Kid (1951) mostly works for me. It is the slapstick ending that irks me, and I like slapstick! It just doesn't work and for that I blame Frank Tashlin - again, I usually like that schtick but here, no.

Nonetheless, it is that glorious little song that draws me in. Jay Livingston in an interview with Elwy Yost on Saturday Night at the Movies said the original title they come up with was "Tickle Bells." His wife was toilet training their kid at the time and said NO.

And making that last line of the movie "Crosby" is certainly breaking the fourth wall.

Thank heavens Mrs. Livingston stepped in. Otherwise the song would have died on the vine.