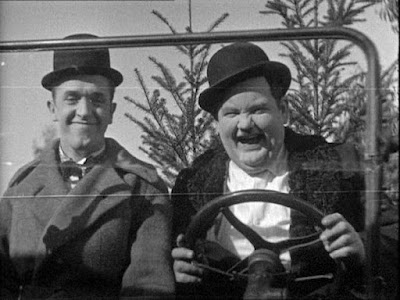 Big Business (1929) is an unabashedly violent and vengeful look at the selling of Christmas trees.  But when Laurel and Hardy are the salesmen, you just don’t regret the absence of peace on earth and good will toward men.

This silent short, directed by James “J. Wesley” Horne, boasted two future greats as supervising director and cameraman – Leo McCarey and George Stevens.  The film was enrolled in the National Film Registry in 1992. 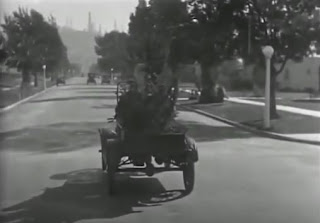 The title card begins the adventure telling us, tersely, that we are witnessing “selling Christmas trees in California.”  This would explain the lack of snow and the palm trees gliding by the little open car with the tiny truck bed on the back, into which are standing a few spindly Christmas trees mounted on wooden stands.  “Spindly” only according to today’s opulent standards (I have brought home real trees in years past which, when crammed into my living room, the single tree took up half the room. Small animals could have lived in its branches and never been discovered. Even getting the tree into the house and squeezing it through the door, some years, my twin brother and I in our younger days would have to grab it and run up the steps with a heave-ho as if we were storming a castle with a battering ram.)

The streets are wide, refreshingly free from the chaos of traffic, and the boys park among a row of Spanish-style stucco houses to peddle their trees door-to-door. 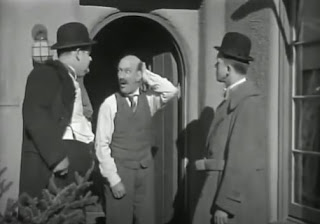 A customer declines.  Another customer hits Ollie on the head with a hammer.  The third customer, our old pal James Finlayson, proves to be the ultimate hard sale.  The shenanigans begin innocently enough:  Stan gets a tree branch caught in the door after Mr. Finlayson slams it on them.  It happens again.  He then gets his coat caught. Soon, the irritated homeowner and the frustrated salesmen devolve into a tit-for-tat battle of one-upmanship.  Finlayson attacks their tree, Ollie’s watch, and the boys start ripping pieces off Finlayson’s house. 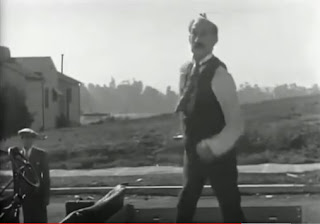 The chaos builds, neighbors come to watch, as does a surprisingly laconic policeman, as the boys destroy Finlayson’s house, and Finlayson destroys their little truck.

Released in April 1929, we may note two things: first, just as we discussed in this previous post, many Christmas-themed movies were not released at Christmastime; and second, perhaps because this movie was released well before the Wall Street Crash in October of that year, there is a bravado of commercialism and complete lack of sentiment.  The boys want to hustle their trees, but we are not given any indication that they are down and out.  As the melee concludes, though all three men appear tearful under the threat of the cop’s presence, they are not regretful for what they have done, only that they were caught. 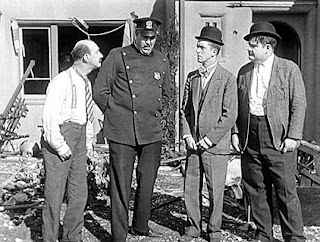 There is no Yuletide softening of the heart here as they would be in movies of later years, no message of reconciliation or discovering the true meaning of Christmas after their fits of destruction.  Stan and Ollie give Finlayson an exploding cigar, and then they run away from the cop.

Even modern Christmas comedies with more grit and sarcasm to them have an “aww-gee” moment, but not Laurel and Hardy in 1929.  Comedy was unapologetically brutal, and consequences were swift and severe.  And funny.

Posted by Jacqueline T. Lynch at 7:50 AM

I always watch this L&H short during this time of the year.

Gotta have the favorites on hand every year.

Love your commentary on this classic. I didn't realize it had National Registry status, although I shouldn't be surprised.

I usually watch one Hallmark Christmas movie a season, hoping against hope I have chosen well. Sometimes it works out. Sometimes I don't finish the movie. However, it is chased down with Big Business. It's a cure-all.

Are there any pictures of little Jack and John struggling with a tree?

Laurel and Hardy as a chaser -- love it.

I don't think there are any photos of us wrestling trees in younger days. I'd have to look. Until I was an adult and got a camera of my own, we really didn't have too many photos of us as kids. Photos were usually for an occasion, frozen smiles at First Communion sort of thing. I marvel at today's kids that have every breath they take documented and put on the Internet.

I think I have some of us as younger adults cutting down our tree at a tree farm here in town. That was fun. It's funny that you never realize how big a tree is until you try to stuff it into your living room.

Indeed. Context is all. A tree outside seems just right. It becomes something else once you get it through the door.

Pretty much the same in our family. We didn't have a camera when my 16-years-younger than the eldest (me) sister was born. I had my first summer job in a factory and bought one with the first paycheque so we could start documenting the kid.

That's a hoot. Documenting the kid. A little opposite for us: my eldest sibling was 20 years older, and she was born during WWII, and my uncle who was, I think, beyond draft age was one of the few men in their sphere who was not overseas, and he was a camera bug, to boot, so she was well documented through her childhood. More kids came after the war, and by the time my brother and I came along, the novelty had worn off, I guess. We were just lucky to get names, let alone pictures.