Orson Welles and the Blessed Eloquence of Moral Outrage

Orson Welles, famous for his War of the Worlds broadcast on radio in 1938, actually delivered a far more daring, even inflammatory, radio program eight years later.  Listen to this remarkable episode below of Orson Welles Commentaries, an ABC radio program broadcast July 29, 1946.  It is remarkable for Mr. Welles’ articulate and noble prose forcefully and intelligently delivered (such eloquence, courage, not to say moral clarity, is sadly lacking by some in our media today).  It is remarkable for the rage of a white man in protest for the brutal beating and blinding of a Black veteran by cops.

In February of that year, Sergeant Isaac Woodward, Jr., a decorated soldier who had served in the South Pacific, had been discharged from the Army only hours before he suffered a brutal attack by the police.  He traveled on a Greyhound bus to his home in South Carolina when, at a planned rest stop, Sgt. Woodward asked if there would be time for him to use the restroom. The driver argued with him, but held the bus for him so he could use the restroom.  At another stop in the town of Batesburg near Aiken, the driver contacted the local police and had Sgt. Woodward forcibly removed from the bus.

Police Chief Lynwood Shull and a few of his men beat up Sgt. Woodward for having the temerity of being Black and insisting he be allowed to use a planned rest stop. They beat him with nightsticks and took him to jail. While in jail, Chief Shull continued to beat Sgt. Woodward for responding with “Yes” instead of “Yes, sir.”  He repeatedly jabbed his nightstick into both of Sgt. Woodward’s eyes.

He was blinded for life. 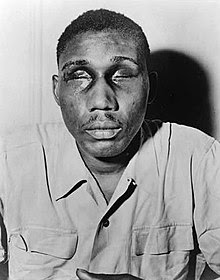 Two days later, they allowed a doctor to come to the jail to look at him.  He was taken to a hospital, and his family, awaiting his return from the war and expecting him to arrive, had to endure three more weeks before they found out what happened to him. He was finally taken to an Army hospital in Spartanburg, but his sight was gone forever.

President Harry S. Truman, furious at the treatment of Sgt. Woodward and the lack of punishment of the police involved, directed Justice Department to investigate.  South Carolina was reluctant to put the police on trial.

A jury trial was finally held that November.  Police Chief Shull admitted blinding Sgt. Woodward.  Still, he was acquitted by an all-white jury.  In the days of Jim Crow, Blacks were not allowed to serve on juries.  When he went free, the courtroom burst into applause.  He was never punished.

Orson Welles knew it back then: Black Lives Matter.

Posted by Jacqueline T. Lynch at 7:32 AM

We should all pay more attention to Welles' radio work. A lot of his Mercury Theater/Campbell Playhouse scripts were powerfully anti-fascist. It's really a shame that there aren't remastered versions available.

I agree, Welles' work was excellent and everything TV and film productions are not these days: intelligent, mature, wonderfully creative, and part of the enjoyment of listening is just the relief of the attitude that the audience was equally intelligent and mature.