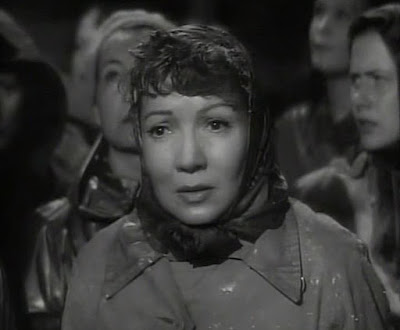 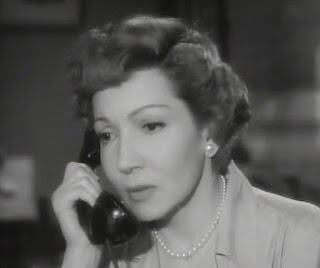 Claudette Colbert stars as Agnes Newton Keith, on whose memoir, Three Came Home, the movie is based. Miss Colbert had long since been a giant in Hollywood, whose ability to play drama or comedy was equal and impeccable. This movie benefitted especially from another quality she displayed which was more subtle: a kind of impression of being unassuming. Another actress might have played this role chewing the palm tree and barbed wire scenery, but Colbert moves from one incredible situation to the next like a person who at once has no idea how she got here, but is intellectually open to every experience. As such, she is our stand-in.

Today we celebrate TCM’s star of the day, Claudette Colbert, in the Summer Under the Stars Blogathon hosted by Kristen Lopez over at Journeys in Classic Film.

Agnes Newton Keith, an American, is the wife of a British official, the Conservator of Forests and Director of Agriculture, in Borneo. Agnes herself is a writer, having authored a book on her experiences as a Yank in Borneo. She is the only American among a colony of Dutch and English government workers and their families.  It is a world of wearing tropical whites and delegating labor to native servants. War breaks out, and the Japanese Army reaches them far sooner than they’d imagined. 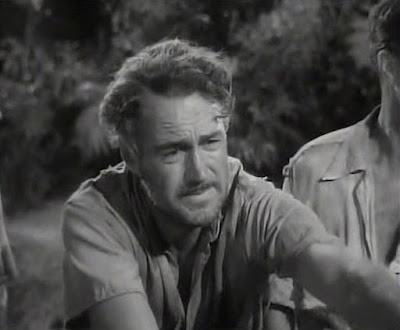 Patric Knowles plays Colbert’s husband, and little Mark Keuning plays their son. He was about six when he did this role, and played in only one other movie, in the same year.  When it appears the Japanese are on their way, Mr. Knowles encourages his wife to take their son and leave for her home country, the U.S., but she wants to stay.  We listen to the bombing of Pearl Harbor on the radio, and a month later, everyone in their small community is taken prisoner. 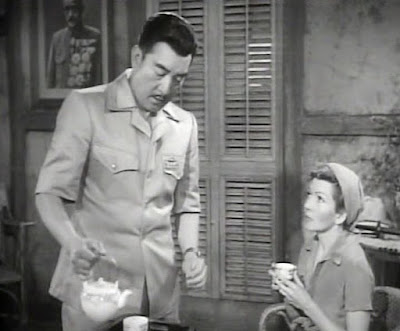 Sessue Hayakawa, whose film career dates back to the ‘teens when he was a matinee idol in silent movies, appears as Colonel Suga, who will figure prominently as Colbert’s counterpart in the story. Hayakawa has read her book on Borneo, and he is very impressed with her, “You were very sympathetic with Orientals,” he remarks, “It’s not usual, you know.”  We have the suggestion that racism is a subplot to the story.

Mr. Hayakawa’s character studied in the United States as a young man, and he and Colbert reminisce about their college years.  It is one of those moments where Colbert’s quality of being unassuming makes the scene almost otherworldly for her being able to take in his surprising words and gentlemanly behavior (he lights her cigarette) while being scared to death at the soldiers with their bayonets about to herd them into a concentration camp. 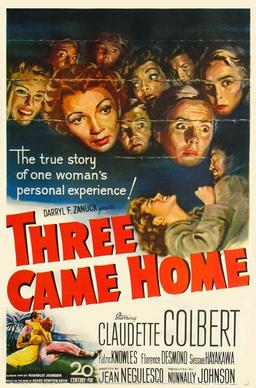 The Japanese soldiers are present everywhere, some are stony-faced and stoic, some are cruel, some are bumbling, but all are human. That is one of the achievements of this movie, made only five years after the war ended.  Agnes Keith in her book was clear that she felt barbarism was to be found not in people, but in war, and the movie seems to have followed the spirit of her book.

The other aspect of Keith’s book well replicated in the film, as Colbert remarks, “Life was reduced to one simple, stubborn purpose – to keep alive.”

They are brought on trucks down the jungle island to a camp where they spend nine months, the women and children separated from the men.  The men’s camp is nearby and they sometimes catch glimpses of them out in forced labor parties or are left notes.  There is a harrowing scene where Colbert sneaks out at night to meet her husband in the bush, while she is weak with fever, having not seen him for five months. 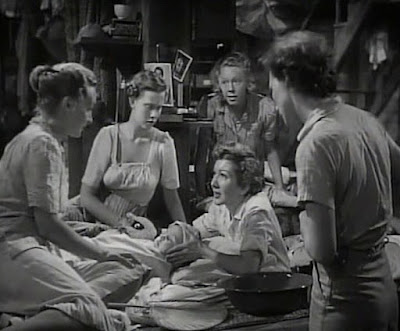 There are scant rations, working in rice paddies, beatings.  Colbert clings to her son and cuddles him.  Her friend Betty, played by Florence Desmond, sneaks her food from the garbage.  There is more in the book about the Dutch and English communities and the sometimes rancor between them, but the movie flows along quickly and with dramatic visuals of the muddy camps in the rain, of a group of British women singing “God Save the King” in their bunks at night while Colbert and her son, giggling, substitute the words for “My Country, ‘Tis of Thee,” of the threat of death always present. 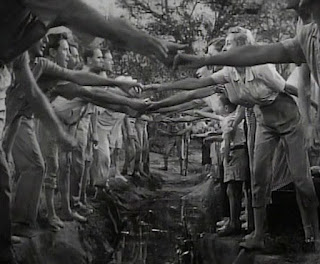 They are moved to a new camp where they will spend the rest of the war, and will not be near the men anymore. They are allowed a distant goodbye with a ditch between them, barely allowed to touch their fingers if they can reach far enough. 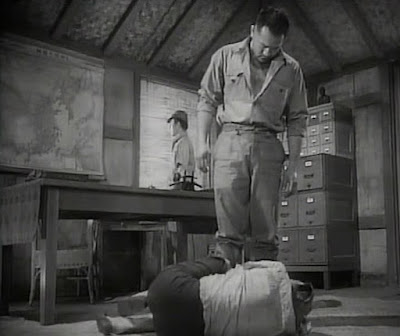 The commander at the new camp, Lt. Nekata, is played by Howard Chuman. He is sadistic.  One night, Claudette Colbert is outside the hut retrieving laundry when a guard tries to rape her.  She reports the incident to Mr. Chuman, who wants her to sign a confession that nothing happened and that she lied.  She refuses, and Chuman has one of his men beat her.  The scene is about to be repeated the next day, when Sessue Hayakawa shows up unexpectedly, is delighted to see her, and he seems like a hero because we know she will be safe if he is near. 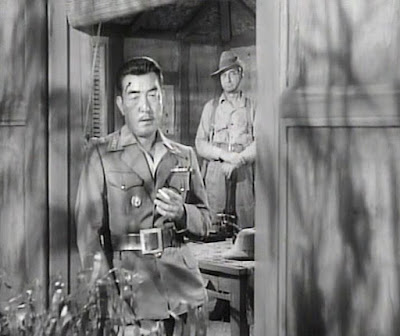 Though he is obviously strict and authoritarian, he behaves kindly to the children in the camp, and insists Colbert sign a copy of her book to him.  Toward the end of the war, in August 1945, they know that Allies will eventually arrive.  Hayakawa is stunned, almost somnambulant, but not because the Japanese have lost the war and he will likely face retribution; it is because, as he confesses to her, his family have all died at Hiroshima.  He says of his three kids, “Three of the dearest children you ever saw.”  Later, while watching Colbert’s son and some other kids playing in his garden and eating fruit he gives them, he will break down and sob. 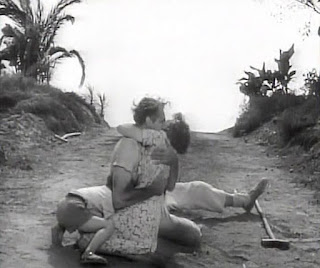 A month later, in September, 1945, they are liberated, with a long scene of reuniting with the men prisoners that is more suspenseful than jubilant as we discover some of the women will not see their husbands again. Colbert at last spots her husband, stumbling down the dirt road on crutches.

The film was directed by Jean Negulesco with a smooth, rather quick pace and many dramatic visuals, but one aspect to the book was left out of the movie.  It is not dramatic, but it is important to the character Colbert plays.  Agnes Keith made secret notes and left them on bits of paper stuffed into cans, buried in the camp, sewed into her son’s teddy bear, hidden all over, and when she was liberated, she made stubbornly certain that she was not going to leave this part of her behind.  She was a writer.  She scrounged up all her notes and took them with her, and they eventually became her book.

The story of women in a Japanese concentration camp is reminiscent of our look here at A Town Like Alice (1956), which took place on the Malay peninsula.  Nevil Shute’s novel was based on stories of women’s real-life experiences as prisoners of war, but because he was a novelist, that story made more of a full arc in the telling.  Agnes Keith’s memoir was nonfiction, so it was detailed and precise, and less concerned with dramatic arcs, more concerned with chronicling a record. Nunnally Johnson’s script is necessarily episodic.  The movie does not tell us, as the book does, that Colonel Suga committed suicide in his Allied cell by cutting his throat on the day Agnes Keith, her husband, and son, left for the United States. 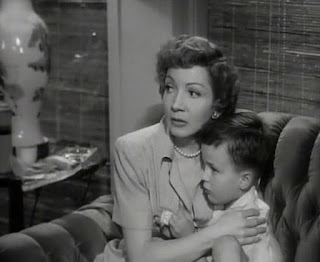 Claudette Colbert, despite her reputation for crisp, aristocratic elegance, had an everywoman quality that lent itself to her achieving a full spectrum of strong women’s roles during World War II: A nurse on Bataan here in So Proudly We Hail! (1943), a wife and mother keeping the homes fires burning—and eventually going to work as a Rosie the Riveter here in Since You Went Away (1944), and in this film, certainly an impressive trilogy.

Posted by Jacqueline T. Lynch at 8:54 AM

A beautiful and very interesting look at a movie I have seen many times, but without the benefit of your hindsight and Ms. Newton's book. Why I never got around to it is a mystery.

I appreciate your description of Claudette as "unassuming"; it is the perfect word to convey that ability she possessed.

Thanks, Paddy. I think it is this unassuming quality that makes her so charming in SINCE YOU WENT AWAY, fending off Joseph Cotten's playful flirtation. Keith's book is one of my treasures. Years ago, more than 30, actually (!) the library in a city near mine used to raise money every year by requesting people donate books they could sell for something like a two-day event in the civic center. For a $1 you could fill up a cardboard box with books - and they were usually novels or memoirs from the 1920s through the 1950s, record albums, too. I loved it. They haven't held that event in many years. These days, people hunting for the old stuff can get it on eBay, I suppose. And pay a lot more.

Loved your review because I love this film. The first time I saw it, I wondered if Claudette C would be too movie-star glam for the role, but she isn't. Like you said, she's unassuming, but strong – and determined. She's the perfect choice in this role.

You almost made me a little teary when you described Suga and his children. That scene always makes me weep a little.

Thanks, Ruth. It really is a fine film, such a standout for the era.