“The Man Who Came to Dinner” (1942) is the kind of sparkling Christmas comedy we don’t see anymore, with more glitz than guilt-ridden messages about finding the true meaning of Christmas. We’re not even looking for it, because it isn’t lost. Here, we are delightfully unburdened with pseudo-morality tales about commercialism. It’s all glamour, and slapstick. If there’s a message at all, it’s about clinging to life with an iron grip and a sense of fun. 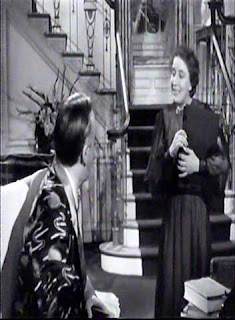 Literate scripts are mostly out of fashion, too, and that is the driving force of this movie, taken from the hit stage play by Moss Hart and George S. Kaufman. Monty Woolley plays the noted author, columnist, radio personality and full-time egomaniac who, making a brief Christmas visit to the home of a small-town industrialist, slips on the steps and is forced to spend his holiday with them as an invalid. Mr. Woolley is spectacular, never missing a beat in his sarcasm, his wit, and his impatience with lesser mortals. This is the role he created on Broadway, and deserved to play on film.

Bette Davis is his competent secretary, who is something of a revelation in this role. We’re used to seeing strong performances from her as larger-than-life characters, and waxing melodramatic in weepy flicks, but here she makes a smaller, quiet role pivotal to the story by being the sane and sassy anchor. She is one of the few people who cannot be bullied by Mr. Woolley by virtue of her sense of humor.

At the beginning of the film, we see the ever ditsy society matron Billie Burke fawning over Monty Woolley and inviting him to her home for dinner. She casts a brief sort of “also-ran” inclusion of the invitation to Bette Davis as his secretary. Davis accepts, quietly, with gracious humility and the self-deprecating smile worn by one who is used to being dismissed as unimportant in the great man’s shadow, but who really runs the show. It’s a subtle gesture and tells us more about her character in 30 seconds than another actress would take the entire film to convey. 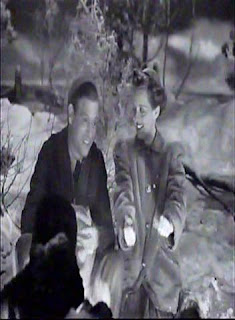 Davis casts a warm glow of serenity, shaken up only by unexpectedly falling in love with the small-town newspaperman who comes to interview Woolley, and who squires her about at the community ice skating party. Davis’ character takes a header on the ice, and she cheerfully basks in the uncomplicated company of locals who are neither clever nor acerbic, just kind. (I know her character is not supposed to have been on skates before, but you’d think Davis, as a good New England girl, would skate better than that. Tenley Albright she’s not.)

Grant Mitchell (excellent here in “The Secret Bride”), plays the industrialist, proud of his ball bearing factory contributing to the war effort. In his own way he is as equally self-important as Woolley, but is only a big fish in a small pond. Ruth Vivian, playing his fey, fragile, and quite weird sister, along with the wonderful Mary Wickes who plays Nurse Preen, are the only ones in the cast, besides Mr. Woolley, to have appeared in the original Broadway play. (Ruth Vivian went back to Broadway next for “The Strings, My Lord, Are False”, the Elia Kazan flop mentioned in this week’s Tragedy and Comedy in New England.) 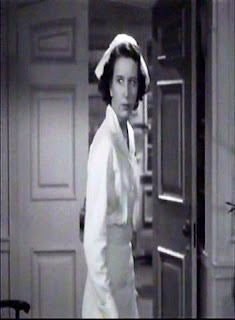 Mary Wickes is hysterical from beginning to end, as the severe nurse who gets the lion’s share of bullying from the great man, and who in the end, in her own diva scene, renounces her Florence Nightingale Pledge to serve a suffering mankind and instead get a job in a munitions factory. His obnoxious treatment of her has driven her to thoughts of destruction.

The lines are fast and funny, and almost too numerous to quote. All the lesser characters, just as with Miss Wickes’ final scene, all get great lines to say, too. The local doctor attending Wooley aspires to be an author, and seeks Woolley’s help.

“I’ve just got one patient who’s dying, then I’ll be perfectly free.” 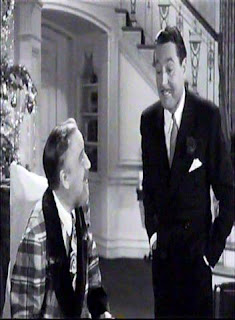 Reginald Gardiner is as quick-witted and sophisticated as Woolley, and does a drop-dead impression of a stuttering Englishman to fool Ann Sheridan. What is perhaps most charming about Davis’ performance is her frequent lapse into delightfully natural giggles at the antics of Gardiner and Woolley playing off each other. 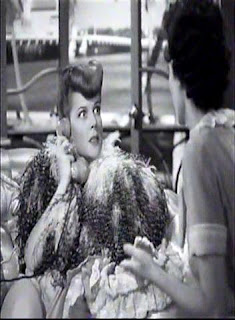 Ann Sheridan is a hoot. The opposite of Davis’ down-to-earth character, Sheridan is off the walls as a self-important, man-grabbing stage actress. Her first scenes playing kissyface on the phone with Woolley, and alternately hollering at her manicurist are hysterical. 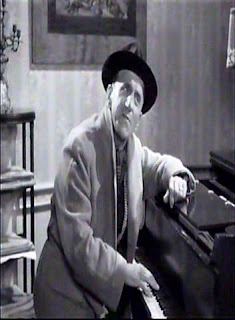 Woolley turns the home of the industrialist and his ditsy society matron wife upside down, and even conducts his annual Christmas Eve radio broadcast, complete with a boys choir, in their living room. Jimmy Durante plays a raucous pal from Hollywood who leers seductively Nurse Preen,

“Come to my room in a half hour and bring some rye bread!”

The son and daughter of the house, teenagers who befriend the really-a-nice-guy-under-all-the-bluster Woolley are encouraged to pursue their own dreams and escape from their bourgeois parents. About the only weak link in the chain is Richard Travis, who plays the newspaperman in love with Davis. Probably he does not stand out simply because everyone else in the cast is so over-the-top.

Possibly the funniest aspect of this script is the constant name-dropping. We are told that Woolley’s character is so important, that he is friends with Winston Churchill, the Roosevelts and the Duke and Duchess of Windsor, that he has received Christmas gifts from Gypsy Rose Lee and Deanna Durbin. New York Governor, and presidential candidate Thomas E. Dewey is his lawyer. The film ends memorably with the voice of Eleanor Roosevelt on the phone calling her dear friend to wish him a Merry Christmas.

To anyone with a cursory knowledge of popular history of the late 1930s and early ‘40s, this script is as fresh and funny as if it were written yesterday. However, I wonder if to someone not familiar with these names, does this make a good part of the film a mystery, and that much over-used word to describe old movies: dated?

The play was revived on Broadway in 2000 with Nathan Lane in the role. I didn’t see it (though I have seen another production), and I’m not going to review or compare it, except to imagine that these same topical references would not have had quite the same impact coming from Nathan Lane as from Monty Woolley, no matter how knowledgeable the audience might be on this time period.

And speaking of name-dropping, I’m not going to explain who Tenley Albright is. If you don’t know, shame on you and too bad.

A revival, or film remake, is always nostalgic. But this film produced in 1942 was not nostalgic. It was up to the minute and topical, and late-breaking news. Watching it, it still feels that way, decades later. That is the marvel of it.

May your Christmas have a little glitz, and glamour, too. But without the escaping penguins.
Posted by Jacqueline T. Lynch at 7:45 AM

JOHN! Thank you so much for the Tenley Albright quote! I'm so pleased somebody made a Tenley reference. She's one of my heroes.

Glad you liked it! & a very Merry Christmas!

Great post Jacqueline. I just saw this last Saturday and it's still a great movie. And recently saw some of the stars of that film in others. Like Ann Sheridan in the wonderful George Washington Slept Here and Reginald Gardiner in Christmas In Connecticut. I love how we can see actors in one movie then see them in something else and they're all great. Like I said, loved your post. Merry Christmas to you and your family.

Thank you, Monty. I agree, I love how we find the same actors playing off each other in different movies. It's fun to recognize favorites.

Merry Christmas to both you gentlemen and your loved ones.

Love this movie! I saw a stage production with James Whitmore circa 1980...I wish I could remember how the topical references were received but all I remember is it was fun. :) Jessica Walter had the "Bette Davis" role; Bill Macy and Marian Mercer were also in the cast.

Thanks for a review of one of my favorite Christmas movies. At least it's not dated for those of us who love the era!

Wow, I wish I could have seen that stage production. Merry Christmas, Laura, and thank you.

My favourite quotations from Sheridan Whiteside"
"Is there a man in the world who suffers and I do from the gross inadequacies of the human race?"
"I've enriched your feeble life beyond your capacity to repay me."

Those are great quotes, panavia, thanks for stopping by. I also like Grant Mitchell's remark at the end of the film that he intends to smash his radio so that he will not, even by accident, hear Whiteside's voice again.

I am trying to find the old b&w about a man who meets a young girl and she asks him to wait for her to grow up. He sees her over time, then at the end goes to a convent, I think, and finds out she had died years ago...do you know it? I used to watch with my mom... I want to see it again

Welcome, Coleen. It sounds like the movie you're thinking of is "Portrait of Jennie" (1949) starring Jennifer Jones and Joseph Cotten. We reviewed the movie in this post: http://anotheroldmovieblog.blogspot.com/2008/01/portrait-of-jennie-1948.html.

The film is available on DVD from the Amazon (Another Old Movie Blog Movie Store): http://astore.amazon.com/anooldmovblo-20/detail/B0002KPHYC.

Thanks for your question. I hope you get to see it soon.