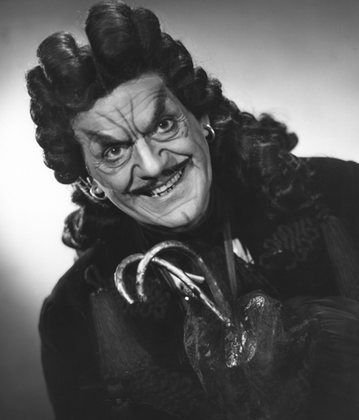 Moira Finnie came to the rescue and supplied this publicity photo of Boris Karloff in his role as “Captain Hook”. We discussed Karloff’s Broadway stint in “Peter Pan” in this post, part of Frankenstenia’s Boris Karloff Blogathon.

Thanks so much to Moira for this very theatrical image of the monster thespian in his stage makeup. Have a look at Moira’s “Skeins of Thought” here, and at the TCM Movie Blog.

By the way, having discussed a couple of Grace Kelly’s early television appearances in this recent post, we might also note that in 1952, Boris played Don Quixote opposite Grace Kelly as Dulcinea in an episode of the anthology series “CBS Television Workshop.”

Boris Karloff as Don Quixote, with Grace Kelly as Dulcinea.

Let me say it again just because I like how it sounds: BORIS KARLOFF as DON QUIXOTE, with GRACE KELLY as DULCINEA. Oh, please let there be a Kinescope of this one floating around somewhere.
Posted by Jacqueline T. Lynch at 7:40 AM

An amazing photo! & I'm with you 100% on wanting to see the Karloff/Kelly Don Quixote match-up.

Hi, John. Yep, Moira came through with a good one. I understand the "Don Quixote" program is only a half-hour show. Gads, they were brave back then.

This photo made my morning! You've got me curious about this Don Quixote thing now. . .

Hi, KC, glad you liked the photo. If there are enough of us who feel the same sense of excitement about this "Don Quixote" thing, we ought to all march on CBS with pitchforks and flaming torches, and demand to see it.

Jacqueline- there may very well be a kinoscope out there. More of the "playhouse" tv movie films are showing up - as witness the recent DVD release. Boris really pulls off the menacing Captain Hook here- and I don't think at first glance I would realized it was him!
On another note (no pun intended as you will see)- I wanted to invite you to join in on a little "meme" I’ve started where you pick your 10 favorite Christmas music performances. I'd love to know what you would pick. If you wish and have the time- let me know if you post something so I can add a link to my post on my site. Here is the main post: http://randomshelf.blogspot.com/2009/12/pause-for-music-10-favorite-christmas.html
Let me know what you think!

Thanks for raising my hopes about the possibility of actually getting to see "Don Quixote" sometime. I hope you're not just being nice.

I'll give some thought to your Christmas music meme. Sounds fun. It might take my mind off working the rest of the way through this danged box of ribbon candy that is holding me hostage.

My understanding is that some of them are showing up more in the hands of collector's and such, some of whom are just now seeing the value of some of what they have- and that some of home video & studio peeps have networks of people reaching out to some them on various prints,etc- and sometimes these turn up when they purchase whole collections. I don't know anything about Don Quixote personally, but one can hope!
PS- look forward to seeing anything you come up with on the music front- just send me a link or note if you do so I can post a link!