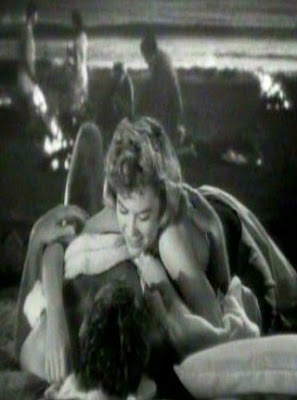 As summer dwindles, let us go to the beach. We had discussed some beach scenes in this post from 2007, and some readers responded with favorite beach scenes. I hope you can come up with some more. Above we have Dorothy McGuire and Guy Madison in “Till the End of Time” (1946), a movie which deserves its own discussion some time or other, but for now, the beach scene will be enough. I think it rivals the famous Deborah Kerr-Burt Lancaster “From Here to Eternity” (1953) scene both in terms passion and pushing the censors’ buttons. 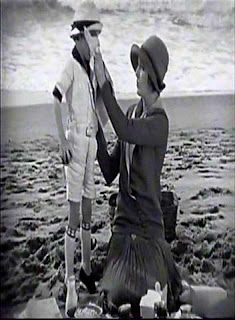 Now, here is a look at some fully-clothed, family style fun in “The Crowd” (1928) with Eleanor Boardman. Few people actually enter the water in this interesting beach scene; it’s really more like a town picnic with an ocean as a backdrop. 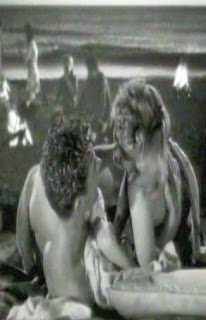 Back to McGuire and Madison. One of the things I love about this scene is the continuous movement. They are constantly rolling over each other, touching, and managing a continuous stream of dialogue as they change position in a natural-looking exploration of each other. Perhaps because the dialogue never stops and they never linger in one grasp for long is the only reason I can think of the censors allowed some of this. 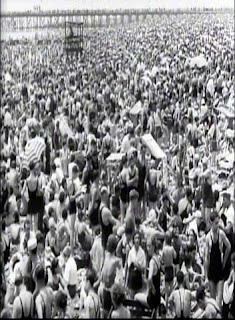 Ah, humanity in all its half-dressed glory. Here is a crowd shot (had to have been a real crowd on a real beach), in “The Devil and Miss Jones” (1941), one of many films to be shot with New York’s Coney Island as a setting. 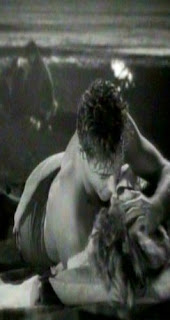 O-kay, we seem to be intruding now. Let’s just walk away quietly and try not to kick any sand. We’ll come back in a minute, and when we do, we’ll clear our throats very loudly so they’ll know we’re here. 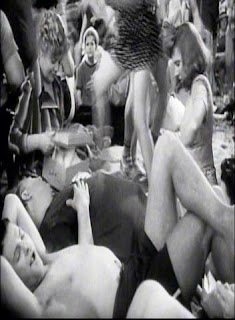 Back to “The Devil and Miss Jones” and the sand-covered beach blanket of Spring Byington, Charles Coburn, Jean Arthur, and Bob Cummings. And more extras than you can shake a stick at. One of my favorite beach scenes for its claustrophobic camaraderie. 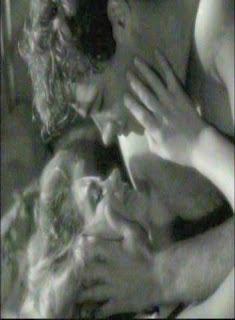 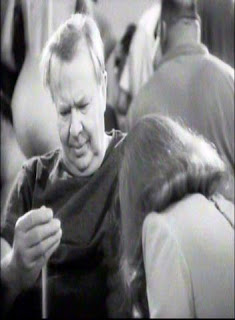 Ah, so telling a gesture, Charles Coburn sifting sand through his fingers, like the sands of time quickly leaving his grasp as he ponders his own lonely life against the passionate young love of Miss Arthur and Mr. Cummings. And he looks great in his saggy woolen rented bathing suit. By the way, have a look here at a fun post on women’s beach fashions over at Allure. 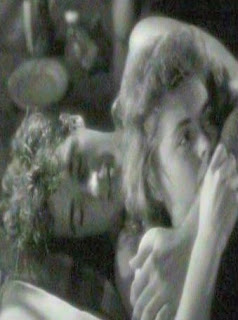 Oh, now see, this is nice. She’s brushing her lips on his arm. Very nice. Am I staring? I’m sorry. Anyone want anything from the snack bar? Some fried clams, maybe? Lobster roll? 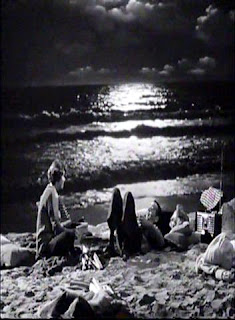 Bogie at the beach, with Gloria Grahame in “In a Lonely Place” (1950). More moonlit beach snuggling, but something’s going to set him off any minute in a rage. No baggy rented suit, no snorkel. No boogie board. Or Bogie board. Bogart doesn’t seem to be much fun at the beach. He doesn't even take his clothes off. 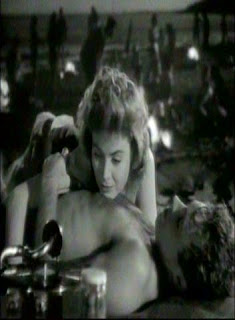 Oh, she’s finally stopping to play a record. Aren’t wind-up Victrola’s wonderful? You can take them anywhere, and with a little cranking, you can listen to “Yes, We Have No Bananas” all day long. 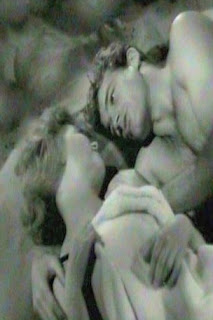 Right, now we’re down to the pillow talk pose. Won’t last long, though, this beach encounter, like Bogie’s, ends with an argument, too. Nothing lasts for ever, not snuggling on the beach, not the song on your 78rpm record, and not summer. The older you get, the shorter summer gets.

Make the most of the rest of your summer. In the meantime, have a look here at the beach scene in “From Here to Eternity.”

Posted by Jacqueline T. Lynch at 8:18 AM

Ah, there are so many beach scenes that come to mind:

Night Song (1948-John Cromwell): Dana Andrews is trying to make himself believe that being blind and bitter is a smart choice, denying the world his compositional gifts and restraining himself from feeling much more than contempt for society girl Merle Oberon. While walking the beach, his pal Hoagy Carmichael lets fly with some truth and optimism. I love the anguished Dana, but, to tell you the truth, the couple I really liked in this movie was Hoagy and Ethel Barrymore, who plays Merle's aunt (and sounding board, on and off the beach).
Btw, Ethel also visits the beach (though never wears anything like a bathing suit) in Young at Heart (1954), but she nods indulgently while Doris Day scampers about and sings to Gig Young.

Rapture (1965-John Guillermin): the setting is the harsh Brittany coast for this French film with an international cast. Melvyn Douglas plays the guardian of Patricia Gozzi, who is a bit tetched in the head who becomes involved with Dean Stockwell. The acting by Gozzi (of Sundays & Cybele) and the fluid camera work almost make you feel the chill of the salt air. Unforgettable.

A Man and a Woman (1966-Claude Lelouch): yes, another chilly French coastline, this time Deauville in the off-season, features a long walk between two strangers, Anouk Aimee and Jean-Claude Trintignant, with their children, a boy and a girl who are students at a boarding school nearby. I love the water scenes when the voice-overs of the adults comparing an old man walking his dog to a Giacometti, and tentatively exploring their attraction to one another. Cue the Francis Lai music...

Rocket Gibraltar(1988-Daniel Petrie): far "From Here to Eternity", it is one of Burt Lancaster's last feature films and he is wonderful. It tells the story of a blacklisted writer whose diverse extended family gathers at his Long Island home to celebrate his 77th birthday. He tells one of his impressionable, observant grandsons (Macaulay Culkin, before all the fame curdled his talent and sweetness) about the Viking's funeral pyre on a burning boat cast out to sea at sunset. The kids proceed from there, without bothering to tell their self-involved adults anything about this. Great cast, and if you are dry eyed at the end of this one, you better check your pulse.

Maybe I'll add more tomorrow. I like your premise, Jacqueline!

Dag-nabbit! The only one I've seen of these is "Young at Heart", and I forgot about that one. These sound great! I'm a little surprised that I'd never heard of "Night Song" since I really love Dana Andrews. Dang.

You're good. You are good.