Working in the Movies

It may have started the day Charlie Chaplin noticed a HELP WANTED placard in the window of a shop or a restaurant. I don’t recall the name of the film, for this scenario was repeated by him and others. He takes the sign and carries it in to the proprietor. Being a silent film, he points to the sign he holds, and then points to himself, placing his index finger imploringly against his chest, tapping his sternum a couple times. The gruff proprietor looks him up and down, and hires him.

There is no mention of requiring a resume or CV. There is no scheduling of first, let alone second interviews, and no references. No human resources director asks him, “If you were an ingredient in a salad, what would you be?” Or asks him any other question as inane as it is insulting, meant to delve into his psychology and ability to become a Team Member. It is a different world of being hired for a job. But then, when the unlucky Chaplin or Keaton, or Lloyd is discharged from employment, it’s often with a boot to the backside, so firing was a different game then, too.

In the early years of motion pictures, quite a lot of films used the workplace as the scene, and even the device which drove the plot of the story. The store, the factory assembly line, the office, the construction jobsite. This was the hard reality playground in the otherwise fanciful world of movie make-believe. Perhaps it was the Great Depression, when one-quarter of this country’s population was out of work in the worst years that changed the focus of the setting and story line of popular films. The little world, this all-consuming focus of the common worker faded like the disintegrating nitrate film on which it was recorded.

The big stars of the 1930s did not seem to play the guy who swept the floor. Character actors now took over the mundane jobs in the background, getting another keg of beer from the cellar while the star sang on stage. The star did not deliver ice anymore. The star was a roving reporter, or a private detective, or soldier of fortune. The star was an heiress or a princess, or the owner of the factory. Once in a while we might see Jean Arthur and co-workers in “The Devil and Miss Jones” (1941) but mostly the idealized proletariat we saw emblazoned in the WPA-sponsored post office murals was not what greeted us in the movie theater. Escape was the order of the day, escape from our troubles of not having a job, or else, the trouble and bother of having one to earn one’s living at all. 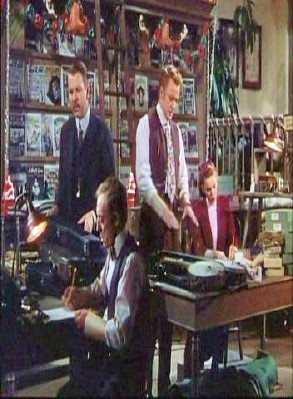 A generation later after The Little Tramp’s job hunt, we have the charming film “In the Good Old Summertime” (1949) with Buster Keaton, who used to play the worker as hero, now relegated to a minor role of just worker in a little shop selling musical instruments, a remake of “The Shop Around the Corner” (1940). Of course, the film’s stars, Van Johnson and Judy Garland are also salespeople in the store, but soon the focus shifts from the day-to-day mundane matter of being salespeople and turns into a love story. The film is a musical and a romantic comedy about finding one’s true love. Always a comforting message, but we know how it’s going to turn out. They will find true love. That’s what we paid for.

But possibly more fascinating, more gripping is what will happen to them if they lose their jobs? What if Spring Byington does not marry shop owner S.Z. Sakall? She is approaching her retirement years; will she be able to afford to retire on her salary? Retirement in those days for spinster shop ladies usually meant poverty.

Will Van Johnson ever be able to marry if he does not get a promotion and more money? People used to consider finances first and then commitment. Will he be a bachelor all his life if he cannot get ahead in the workplace?

When harried Judy Garland complains to Johnson, “When I came here I was a very enthusiastic girl. Now look at me!” we can commiserate because how many of us have felt frazzled by our jobs?

When boss Sakall makes them work overtime and take inventory, we see their frustration at having their personal plans for the evening thwarted, their lives thrown off kilter by the need to please their employer. All this stuff of the workplace is fraught with dramatic tension. While it is not as lovely as the quest for true love, it is what most of us can identify with because work takes up most of our lives.

We spend a lot of time at work. Yet even on television, where for decades the workplace was the setting for dramas and sitcoms, quite of lot of the storylines and action does not center on work. Rather, it focuses on the private lives of the characters and their personal relationships. We don’t really see much work being done. Ninety years ago all it took was a HELP WANTED sign to set the ball rolling for the plot to thicken, and the fun to begin, and the springboard for dreams to come true. Have a look at this clip from “Modern Times” below, and Happy Labor Day.

Posted by Jacqueline T. Lynch at 7:38 AM

Great post - similar thoughts occurred to me while watching (the original) Shop Without a Corner. I didn't see the "You Got Mail" remake but wasn't Tom Hanks now the owner of his store? Plays into your theory if it's true.

Hi, Movieman, thanks for stopping by. I didn't see "You Got Mail" either, but I think you're right, I believe both leads in that film were were upscale, management rather than labor.

David Bordwell did a great post on the stylistic differences between Shop on the Corner & You Got Mail a while back - and how this indicated the shift from long shots in which the action played out to fast editing and close-ups, not just in action movies but pretty much every mainstream Hollywood film.

You can check it out here:

Thanks for the link, what a great essay. The fast editing is something that is very noticeable about modern films. Sometimes this is used effectively, but quite a lot of the time it seems jarring. TV has taken this technique over as well, where each time a person makes even the slightest utterance, the camera shifts angles. Either the audience, or the cameraman, has a very short attention span. But it isn't me. They can keep their quick cuts and their hand-held camera shots as far as I'm concerned. Give me a nice long slo-w-w-w shot and let me get a good look before you cut the shot.

A friend of mine once told me that when he was a boy he could tell by walking down his street at night who had television sets beause one could see a soft blue glow from their picture windows. Nowadays, he said, when he walks down his block in the early evening, it's as if each home is equipped with a powerful strobe light in each living room because the glow is not steady, but constantly flashing. His discovery may not be as technical as Mr. Bardwell's explanation, but it might just amount to the same conclusion.