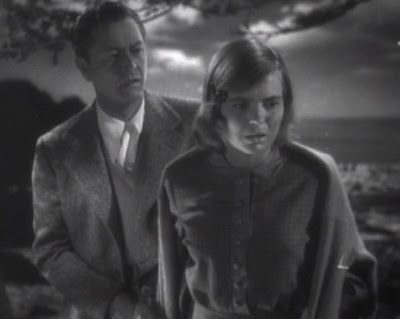 The Enchanted Cottage (1945) is today a sentimental favorite of many old movie buffs, but upon its release, New York Times critic Bosley Crowther found the film “unreasonable” and “contrived.”

Dissenting opinions of this film are perhaps fitting, as the film’s message is of beauty being in the eye of the beholder. But Mr. Crowther’s practical assessment is interesting. He claims that the story of the WWII veteran with scars upon his face and a right arm left useless by his war injury who finds love with the homely maid in the cottage he rents, each finding beauty in each other, is ridiculous because these two people don’t have to be ugly if they don’t want to be. Advances in plastic surgery of the day would make it possible for the veteran, played by Robert Young, to be “studiously rehabilitated” and with cosmetics, the plain girl, played by Dorothy McGuire, could “make herself look very sweet.”

He has a point, but here Mr. Crowther is looking at beauty as being only skin deep. Our perception of beauty, and perhaps to modern audiences today, our perception of being accepted by other people and loved for who we are is the broader message of this film. Taken as an allegory and not literally, the film can be emotionally devastating as it is uplifting, and interestingly, for what we see into it and not for what we see.

A remote cottage on the New England coast is a setting intended to be romantic and haunting. Mildred Natwick plays the owner of the cottage, a lonely widow with an austere manner and seeming intuitiveness for unexplained phenomena, who invites Dorothy McGuire to work as a maid. Miss Natwick’s character displays a kind of sixth sense about people, but we are never given an explanation as to why or how she deftly manipulates the fortunes of those around her, but she has shut herself off from all people until a handsome Robert Young shows up wanting to rent her cottage. He brings his intended bride played by Hillary Brooke, a glamorous society girl who dismisses the new maid McGuire, with a bored glance.

Later, she breaks her engagement with Young by her horror at his disfigurement upon his return from the war, and the bitter Young broods in his room in the cottage, hiding from the world. Equally condescending and horror struck are his flighty mother, played by Spring Byington in a departure from her usual kindly roles, and stepfather played with terrifically boorish officiousness by Richard Gaines.

Mr. Young and Miss McGuire find comfort in each other’s company, marry for the sake of convenience, and fall so deeply in love afterward as to become beautiful in each other’s eyes and in the camera lens as well. This is one of the most memorable aspects of the film.

Young’s afflictions are more obvious. When he lights a match to gaze upon his face in the mirror of a dark room, the camera lingers on the drooping right eye with the line of a scar ending at his ear, and a twisted lower lip. As he fixes a hollow gaze upon himself, we may expect him to turn into a werewolf at any moment, and even critic Mr. Crowther comments, not unfairly, that he is made up “to look like something horrible constructed by Dr. Frankenstein.”

Dorothy McGuire’s ugliness is remarked upon by others and herself, but it is hardly the stuff of horror films. The chief feature of her homeliness lies in a somewhat mousy appearance of not being made up, and in the way she is lighted. In her homely scenes, she is lit poorly to convey harsh shadows on her face. It’s especially noticeable when she is in a scene with another person, and the other person is lit well, smoothly and in a flattering way, and she isn’t. That had to have been challenge for the crew. McGuire seems to be lit from below quite a bit, and the lighting crew all but holds a flashlight under her chin to create hard lines and freaky shadows on her face, the way we did when we were kids telling ghost stories. Remember that Seinfeld episode where his new girlfriend is alternately ugly or beautiful depending upon what lighting she’s in?

Cinematographer Ted Tetzlaff and editor Joseph Noriega deserve to be noted for their work on this film, culminating in the terrific scene where Young’s mother and stepfather return to visit, and the camera lets us see, if we haven’t figured it out before, that there is no enchantment in the cottage that made them beautiful, that they are beautiful only to each other. In different shots, viewed by her adoring husband, McGuire is coiffed and made up, and lit of course, beautifully, and from another camera angle from the perspective of the in-laws, she is homely again. Terrific scene when they come down the stairs together, beautiful at the top of the stairs, ugly at the bottom.

But director John Cromwell, an actor himself, doesn’t rely solely on camera tricks to tell the story. He sets quiet scenes where the actors are allowed to exchange their dialogue in long continuous shots, and this is the best part of the film. Dorothy McGuire, in particular, is a marvel of subtlety in her range, displaying with great strength and quiet intensity a character which in the hands of less sensitive and intelligent actress could have been a dishwater role. The comforting sound of her gentle voice is appealing and quite moving.

Herbert Marshall effectively plays the blind neighbor, a man whose own gentleness, as well as his actual blindness, make it possible for the couple to confidently engage in society beyond the safety of the cottage.

But Mr. Crowther is unconvinced, calling the film “more of a horror film than a psychological romance.”

At “face value” perhaps (pun intended). But there is more going on here beneath the surface, at least to many modern old movie buffs who find the film romantic and inspiring. In 1945, when Mr. Crowther advises plastic surgery and cosmetics to make one socially acceptable, Mr. Young’s parents concur by encouraging the ugly newlyweds to remain apart from the world in their safe cottage. Even Mildred Natwick, consoling Miss McGuire on her return from a disastrous outing at the village servicemen’s canteen, says, “It’s not for some of us, you and for me, to try to live like other people. You think you can sometimes, but there’s always the world to remind you. All the things that other people take for granted, you’ve got to make up your mind and your heart they’re not for you. You’ve got to find something else to take their place. Somewhere where you’re safe, where no one can hurt you.”

In her heart, this is something McGuire’s character already knew. She did not volunteer at the canteen to meet new friends, but to help out in the war effort. She was contentedly ensconced in the kitchen washing dishes for six months before the canteen hostess, a social butterfly herself, whisks McGuire out onto the floor where a Paul Jones, a square-dancing type dance for partners to change and meet new people, leaves McGuire emotionally crushed by being excluded once she’s out there.

It seems not simply a case of young men avoiding her because she is homely. McGuire just doesn’t fit in. She finds more comfort in the companionship of older people, quieter company, working diligently on her wood cuts and seeing to the comfort of others. The flash and noise and speed of the social interactions of her peers bewilders her.

Modern audiences who’ve taken this film to heart and call it classic maybe are not seeing a young woman with heavy eyebrows and no makeup acting like a wallflower. They may be seeing into it their own experiences, or the experiences of someone they know, who is physically challenged. Someone who is developmentally delayed. The child with cerebral palsy who struggles with stares. The autistic child who comes from the safe cocoon of home to the mainstream classroom where to his dismay, finds himself ostracized by peers. He is helpless to understand social cues, which is the key to survival. As the years go on, he will no longer seek the social interaction he desperately wants, but build an emotional wall for his own protection. Today’s film buffs see debilitating shyness and psychological barriers where being lonely occurs only in a crowd of other people and never by oneself.

We live in a world, several decades after this film was made, where being different is not so damning as it once was, but still comes at a cost. Perhaps this is what today’s old movie buffs see in this film, when it is taken as an allegory for all the outcasts among us. The possibility of being loved for who you are remains as irresistible as ever.


Jacqueline T. Lynch is the author of Ann Blyth: Actress. Singer. Star. and Memories in Our Time - Hollywood Mirrors and Mimics the Twentieth Century. Her newspaper column on classic films, Silver Screen, Golden Memories is syndicated nationally.
Posted by Jacqueline T. Lynch at 7:28 AM

What a lovely take on this movie, which I have always treasured as one of American cinema's true romantic fantasies. That Crowther's observations were so obtuse just confirms my feeling that he was pretty much a hopeless critic. (Although a nice man, by most accounts.)

I agree with you, that many people (including me) read this film, correctly I think, as a metaphor for all kinds of things that may isolate a person from society, and from the love and understanding we all crave.

Thanks for your comments, you old softie.

I enjoy reading Crowther's reviews. They inevitably make me wonder what planet he was on. I get such a kick out of the disparaging "real time" reaction to films which have undergone so much analysis that we may forget today what the original reaction was.

Truly, though, when viewed through the prism of unhappy personal experience, this film is remarkably powerful.

Beautiful assessment of a fine, enchanting movie. I saw this for the first time just recently and was enthralled by it. Thanks for your review.

Thank you for your kind words. It's good to know people are still discovering this lovely film.