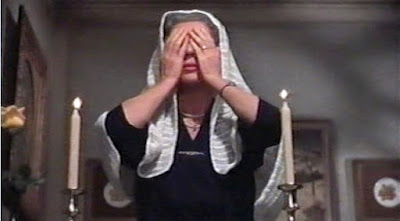 Recently, a lady contacted me to share some information about her grandmother's involvement in the film A Majority of One (1961), which we discussed here.

I receive emails from time to time from readers of this blog, but I seldom mention them out of the assumption that they prefer their comments to be private, otherwise they would leave their remarks in the blog comments section.  However, I was given permission to share this, though I will omit names.

"I read your article about Rosalind Russell’s moving portrayal of an older Jewish woman in A Majority of One and in particular her blessing of the Shabbat candles.

"It meant a lot to me reading this because my grandmother... told us that she was the person who showed Ms. Russell how to do it."
A rabbi was consulted for the film regarding this scene, and he recommended her grandmother for the job of teaching Roz about the beautiful prayer ritual.
"I think she went 1 or maybe 2 times to show her.  I never really asked the details, but she told us what she’d done at the time.
"I never saw the movie.  But to read of this as an especially moving part of the movie and to know of my grandmother’s role and remembering her pray over her own Shabbat candles brought back wonderful memories.  I’d like to see the movie.  Thank you."
Receiving this email was, of course, a great thrill for me, not only to hear from someone even distantly connected to the film, but to find out a little more about the behind-the-scenes technical consultants whom we sometimes don't learn much about, though probably most films then and now do rely on the expertise of consultants.  Even, in this case, if it's only for one very special scene. 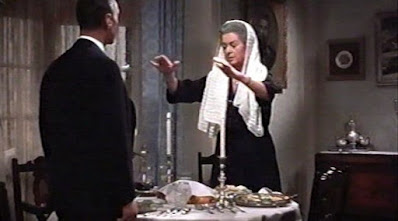 Jacqueline T. Lynch is the author of Ann Blyth: Actress. Singer. Star. and Movies in Our Time - Hollywood Mirrors and Mimics the Twentieth Century and Hollywood Fights Fascism.  Her latest book is Christmas in Classic Films. TO JOIN HER READERS' GROUP - follow this link for a free book as a thank-you for joining.

Posted by Jacqueline T. Lynch at 7:46 AM

Email ThisBlogThis!Share to TwitterShare to FacebookShare to Pinterest
Labels: A Majority of One, Rosalind Russell

This is amazing! How wonderful that this reader reached out to share this information. I'm so glad she gave you permission to share it!

Like you, I love behind the scenes information on movies, and this is priceless! I have to admit I hadn't given much thought to the creation of the blessing of the Shabbat candles in A Majority of One.

Thanks, Karen and Terence! I wonder if anyone ever interviewed Roz on this scene. I would love to have her take on the lessons and what performing the scene meant to her. So grateful that her teacher's granddaughter contacted me.