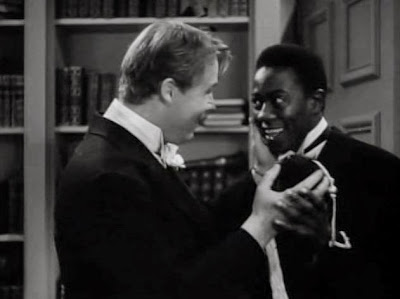 “The Smiling Ghost” (1941) is one of those fast-paced scary/silly B-movies that the Warner Bros. studio could knock out in its sleep.  There’s a lot to amuse here, and a bit of a mystery, but mostly it’s a lot of scary house clichés as harmless as a handful of candy corn.
Unless you’re allergic to candy corn.

Or unless candy corn offends you.

There’s only one offense here in this well-intentioned free-for-all, and that’s the stereotyped character of Willie Best, who plays the longsuffering assistant of Wayne Morris.  To Mr. Best’s credit, he gets some good lines and his delivery is hysterical.  I think he probably gets more screen time than anybody in this movie except for Wayne Morris. 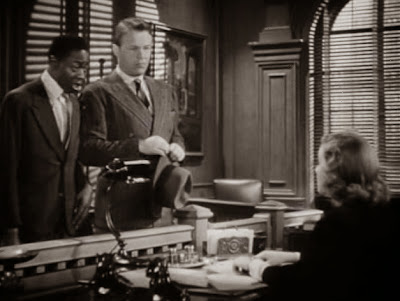 Wayne Morris, a befuddled victim/suitor who agrees to pretend to be engaged for one month to a jinxed girl for $1,000 (her former fiancés are all either incapacitated or dead), is a sweet fellow who really needs Willie Best to look after him.  I like how when they are called to the attorney’s office to set up the deal, the receptionist asks which gentleman is the client, not presuming that it’s the white guy and calling them both gentlemen.  Willie takes charge and speaks up, because it always takes poor slow Wayne a minute to sort things out: “The light-complected gentleman here.” 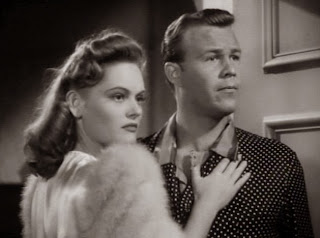 Alexis Smith is the “Kiss-of Death-Girl” who cannot hold onto her fiancés. We see how early in her career she’s been cast as the cool beauty, a template that would stay with her for many years. 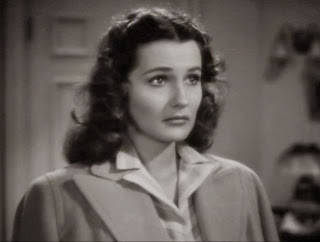 Barbara Marshall is the sane and sassy girl reporter, because you just have to have a girl reporter in these things. 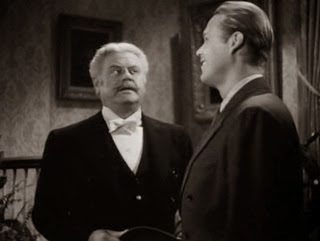 Alan Hale is the butler, but not in the Arthur Treacher mold.  He’s a regular Joe, who talks gruff and carries a gun.  He’s supposed to guard Wayne Morris, because Wayne is supposed to break the curse.  If he lives. 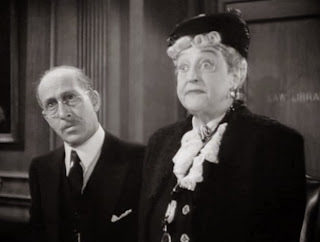 Helen Westley is the sharp old grandma who set up the caper, and Lee Patrick is a cousin who covets the family jewels. 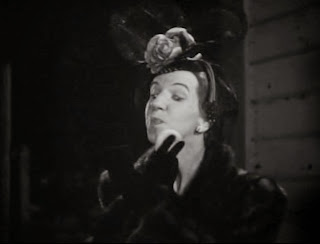 And I have to smile at Renie Riano in a typically small, stereotyped and funny role as The Homely Woman.  She's a game gal. 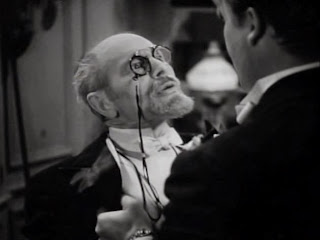 Wayne Morris meets the dour extended family, including a crazy uncle, played by Charles Halton, who shrinks heads in his laboratory.  Mr. Morris settles into to a spooky night, oblivious to the fact he might be victim number four.
We have secret panels, cobwebs in the cellar, cobwebs in the family crypt, a fog-shrouded graveyard, and best of all, a thunderstorm during which we hear peals of “The Storm” from Rossini’s William Tell, which you will recognize from many, many Warner Bros. cartoons. 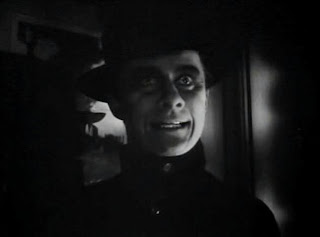 A murderer wanders the mansion, and though we get glimpses of a waxy face with dark, sunken eyes and a sickeningly fixed grin, the identity of the monster is withheld until the end.  He lends some excitement to the proceedings, but for my money, the scariest sight in this movie is the fellow, one of the former fiancés who lived, but who is now paralyzed—encased in an iron lung.  Jeez, those things were frightening. 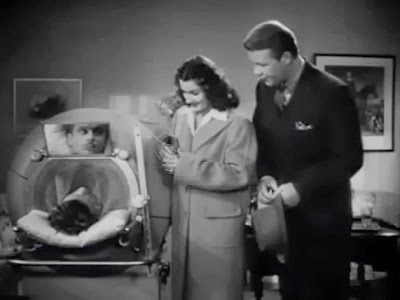 And if you think about it, just the shot of watching the patient through the mirror mounted on the top of the machine suggests a disembodied head.﻿ 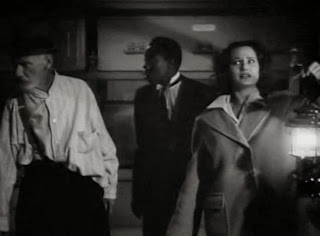 You don’t have much time to think about the plot, even if you wanted to, because there’s too much going on, a few fistfights, a couple magnificent tumbles down a very long staircase, and a romantic triangle when the girl reporter and the Kiss-of-Death Girl become rivals for the hapless hand of Wayne Morris.


True love conquers all in the end, including one disgruntled smiling ghost.
One of my favorite lines, when the Justice of the Peace arrives to perform a midnight wedding, “The Justice of…stuff is here.” 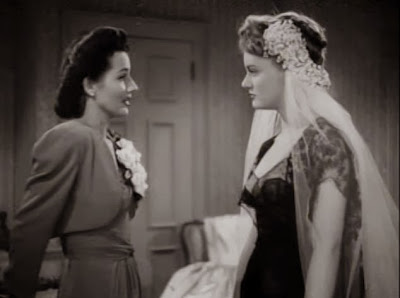 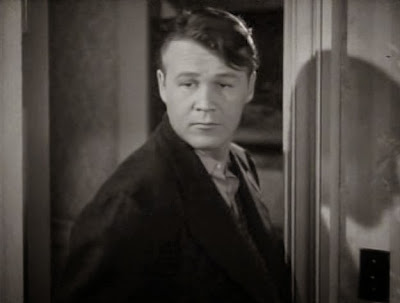 Posted by Jacqueline T. Lynch at 9:02 AM

Sounds like a hoot. I have a soft spot for Wayne Morris and love the idea of Willie Best getting lots of screen time.

I have similar conflicted feelings whenever I watch Willie Best - I'm wincing at the racial stereotypes he was subjected to, but at the same time I'm admiring him as a fine comedian, who could hold his own with anyone, including Bob Hope. It's the same with Mantan Moreland, who also was given demeaningly stereotyped roles but was just so BRILLIANT a comic and actor, that I'm always glad to see him in a film.
Enjoyed your post and Happy Halloween!

Glad to hear from Willie Best fans. He was given a crummy deal, but he made the most of it.

CW, I also have a soft spot for Wayne Morris. So likeable.

Jacqueline, I agree with you about the talented Willie Best! It's a shame he wasn't in films in a more enlightened era, but as I always say, we can't fault people for NOT being ahead of their time, irksome though it is. At least Willie gets the last laugh by stealing most of his scenes! It's a heck of a cast in any case, so I'll keep an eye on TCM and such!

Renie Riano gets typecast, too. It was a steady diet of humor-via-insult. But she when she powders her face, she's a femme fatale in her own mind, and Willie's the only sane one, albeit terrified, in a house full of crazies. So who's really the fool?

Re Willie Best. He took the world as it was and made a lot of money. I've never heard he was subject to abuse of any kind. There was racism. There is always something. Get off the soap box.

Your sentiments, that he endured racism but made the best of it, were echoed in the post and by all the preceding comments. Who is on the soapbox? What is the source of your irritation, that being black was a disadvantage in his industry at the time, or that I and others have mentioned it?

Definitely prefer my ghosts to be happy

Of course being black was a disadvantage in life -- but se had a successful cultural revolution. But, Willie Best as one of the people the people who succeeded despite bigotry. Thumbs up for them but maybe for the people who employed these great actors as well.

My comment above is a mess. Sorry for that. I would like to try again. Here goes. Being black was a disadvantage. (See Jim Crow, racism, and various forms of the Gentleman's Agreement.) We had a cultural and legal revolution. Willie Best was one of the people who succeeded despite bigotry. Thumbs up for him and others. And perhaps for the people who gave them opportunity. Producers, etc.

That's a most impressive cast for a B movie such as this. Sounds like its worth checking out.

Kevin, it is an impressive cast. I especially get a kick to see where Alan Hale pops up in different movies. The butler could have been played by anybody, but maybe he had a few free minutes. He'd made six films released this year.

I love Willie Best. Glad to see him get a lot of screen time as well. How did I ever miss this movie, Jacqueline? It has 'Yvette' written all over it. Sounds like just the sort of thing I love to cozy up with on any cold winter's night.

This is one I will definitely be watching one of these days. Thanks for letting me know about it. I thought I'd seen most of these sorts of films over the years. But this one slipped under the radar. Where did you ever find it????

P.S. Willie Best was at his 'best' in GHOST BREAKERS with Bob Hope. Practically steals the picture. 'I hope you get your expects.' Classic line. Makes me smile just to think of it.

Glad to hear from another Willie Best fan, Yvette. Now that you bring up "Ghost Breakers", I think I read somewhere that Bob Hope thought Willie Best was one of the top funny actors he ever worked with.

I'm not surprised, they really worked wonderfully together. I re-watch GHOST BREAKERS all the time, it never loses its appeal. :)

There's nothing sexier than confidence.