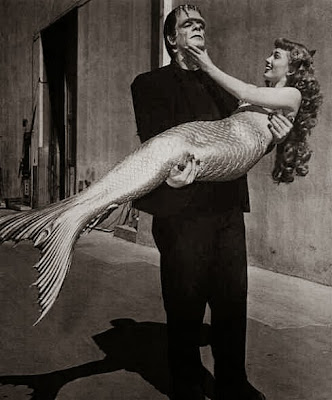 ﻿
In the spirit of the upcoming Halloween (or Samhein, for you Celtic types) festivities, we have one of those sneaky tabloid newspaper shots proving all those whispered rumors that the Frankenstein Monster had a torrid love affair with Ann Blyth.

Or maybe Mr. Peabody and the Mermaid, in which Miss Blyth starred as the, well, mermaid, wrapped in late February 1948 just as Abbott and Costello Meet Frankenstein was in the middle of shooting.  Glenn Strange, as the Monster, and Ann Blyth, neighbors on the Universal studio backlot on this day, took a moment to clown around.

Makeup master Bud Westmore was responsible for the remarkable transformation of both of them.

A match made in heaven.  Or just at the wrap party.

Next year, as announced a couple weeks back, we'll take a long, leisurely perusal of Ann Blyth's career on film, TV, radio, and the stage.  So far, from my research, I'm able to state confidently there was nothing romantic between her and Dracula or the Wolfman.  However, I did see an ad in Action Comics from 1949 (link to the image here) where Superman flies off with the mermaid in his arms in a little cartoon publicity for Mr. Peabody and the Mermaid. Clearly, we may note from these intimate encounters with Superman and the Frankenstein Monster, if the fella was tall, dark, and fictional, Ann couldn't keep her hands off him.

Next week, on Halloween, we'll take a look at The Smiling Ghost (1941), a B-comedy/horror that brought together Wayne Morris, Brenda Marshall, and Alexis Smith early in their careers.
Posted by Jacqueline T. Lynch at 8:16 AM

I am shocked, shocked by this revelation, Jacqueline, but not by the suggestion of a inter-humanoid romance, since I believe that if Boris Karloff was under the makeup, Frankenstein would have been most appealing. Rather, I am shocked that you found such a funny picture to post!

Can't wait to read your Ann Blyth retrospective, however. You are a tease!

Moira, far be it from me to turn into Louella Parsons and report all the Hollywood dirt--discretion is my watchword--but who are we to judge?

Such a powerful image, isn't it? Like Romeo and Juliet in an alley between two soundstages.

And I agree that Karloff would have been my dream monster.

Too bad the monster and the mermaid weren't in a movie together.