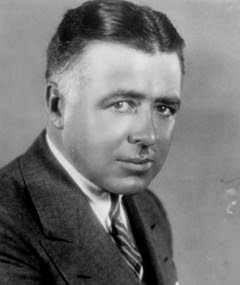 Clarence Brown, respected movie director during Hollywood’s glamour’s heyday, had a different career as a very young man.  How much influence the manufacturing city of Chicopee, Massachusetts, had upon his future choice of career in during the short time he lived here is unknown and probably negligible, but it is intriguing to observe how the fledging movie industry and the fledgling auto industry ran a parallel, and interdependent, course.
Mr. Brown, before he ever knew what movies were, was employed by the Stevens-Duryea auto manufacturer in Chicopee.
Brown was born east of Chicopee in the town of Clinton, Massachusetts, in 1890.  The turn of the 20th century fast approaching, a menagerie of new innovations in science and art, and especially in new inventions, burst forth in such a stream of imagination that many qualities of the next century would find their prelude in this very decade. To narrow it down a little, both automobiles and moving pictures had their impetus in this frenetic decade called the Gay Nineties.
Both cars and movies have come to mean a great deal to us, and certainly to Clarence Brown.
While Brown was a small child, Frank and Charles Duryea were tinkering with their experimental gasoline-powered horseless carriage, the prototype for which was supposedly designed in their boardinghouse on Front Street in Chicopee. It didn’t take long for the auto industry to be off and running. The Overman Wheel Company in the section of town called Chicopee Falls was one of the country’s many new automobile factories; they were producing cars as early as 1900.
The men who designed and produced these marvelous machines were considered to be wizards of technology, dreamers, and rugged individualists. Clarence Brown may have fit into this mold, for surely he was a unique young man. Intelligent and gifted, he was allowed special permission to attend the University of Tennessee when he was only 15 years old.
While he studied engineering there, the threads of his future destiny were already forming for him thousands of miles away. In 1907, while Brown was away at college, the Duryea firm back in Chicopee contracted with the J. Stevens Arms plant in Chicopee Falls to produce their cars.
Stevens Arms company, postcard, Image Museum website, public domain
The following year the first movie theater in Chicopee opened. It was called the Gem, and it was located around the corner from the Stevens plant on Main Street. Any connection between these two newborn industries was unapparent at the time, and would even be to Brown at first.
His father, Larkin Brown, had run a cotton mill in Massachusetts, but when Clarence was a boy, the family moved south where his father continued in cotton textile manufacturing.  His father hoped that Clarence would go into the family business, but after graduating with two degrees at only 19 years old, the remarkable young man decided to follow his passion at the time—which was the new automobile craze.
He first went to Illinois to work at an automobile plant there, but soon came to Chicopee and the Duryea company around 1910.
Industry in the manufacturing town of Chicopee was diversified and booming at this time. Any number of products were produced here then, from foodstuffs to bicycles to clothing. Though we may think of the opportunities presented to the thousands of skilled and unskilled laborers who came here for work as represented by the huge influx of immigrants from Europe and Canada, Chicopee also became the proving ground for any number of professionals and “bright young men” who began their careers here.  One of them was Clarence Brown. 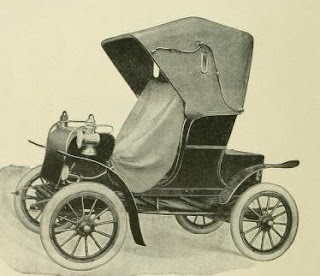 The Stevens-Duryea 1905 model
While Brown was working at the Stevens-Duryea auto plant, two more moving picture theaters opened up in the city. It would be tantalizing to think that Brown’s future fame as a director was born in a dark theater in Chicopee, but we’ll never know. Surely any interest he might have discovered in the flickers was put to the back of his mind, for about 1912 he left Chicopee. 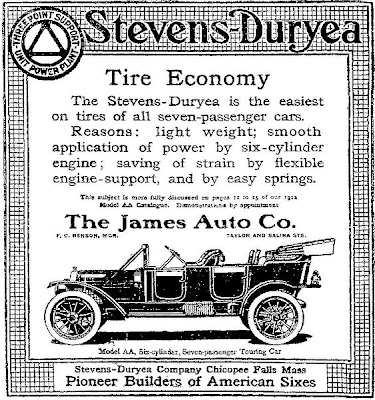 1912 advertisement
Brown is quoted in Kevin Brownlow’s The Parade’s Gone By…, “I became the traveling expert mechanic for Stevens-Duryea.  One of my calls was to a dealer in Birmingham, Alabama, who took a liking to me, and he set me up in a subsidiary company, called the Brown Motor Car Company. I had the agency for the Alco truck, the Stevens-Duryea, and the Hudson.  It was around this time—1913, 1914—that I became interested in the picture business.”
His favorite flickers at the time were produced by the Peerless Company, and Brown left Alabama and his business, and became an assistant to Maurice Tourneur, one of the directors for Peerless, whom he always credited with being his greatest teacher and directing mentor.
Years later Clarence Brown’s own films played in the new Chicopee theaters: the Rivoli, the Wernick, the Willow, and the Victoria—“second-run” neighborhood theaters which Brown never heard of because they were built after he left Chicopee.
Brown directed Greta Garbo in Anna Christie and Anna Karenina and five of her other films. His film A Free Soul made a star of Clark Gable, and his National Velvet introduced us to Elizabeth Taylor.  He gave us The Yearling, The White Cliffs of Dover, and Plymouth Adventure before retiring in 1953. He was nominated for a Best Director Academy Award five times.
Brown died in 1987 at 97 years old. Talent and ambition in one field brought him to Chicopee, but he made his mark in that other new industry in Hollywood.  And where would “the flickers” be without car chases?

A previous version of this article appeared in In Chicopee (a publication of the Holyoke Transcript-Telegram, Holyoke, Mass.) 1992.

Posted by Jacqueline T. Lynch at 9:31 AM

The time period holds great fascination for me.

Brown was a complete artist and craftsman. My favourites of his work feature children, mainly searching loners as in "Intruder in the Dust", "The Yearling", "Ah, Wilderness!" and "National Velvet".

I agree. He must have been a precocious child himself. I'd like to see more of his silent films. It was certainly an age of great energy and "drive".

What an interesting article. I've had his "Anna Christie" in my to watch pile for the longest time now. May have to watch that this weekend.

And I should take "The Parade's Gone By" off the shelf for another read. One of the essential books in my collection.

Thank you, Kevin. I'm impressed you have Brownlow's book. I'll look forward to what I hope will be your eventual review of "Anna Christie."

Interesting to read that Clarence Brown lived till the 80s .wonder if anyone did any extensive interviews with him. Think of the stories!

Other than Brownlow's book in the mid-seventies, I don't know if he'd been interviewed that much. I think he's mentioned in context with studies on Greta Garbo, but for the most part, I wonder if Brown isn't just one of those fellows who never got much attention.