Angel's Flight Railway in the Movies 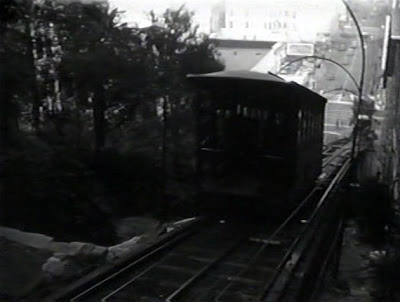 One scene in our look at "The Unfaithful" (1947) last week here--really delighted me and I thought I'd save that for this week.  It's this view of a funicular railway in downtown Los Angeles.   We see Marta Mitrovich, who plays the widow of Ann Sheridan's attacker, traveling home to her working-class neighborhood on this railway car, when she reads the news of her husband's death in the newspaper. 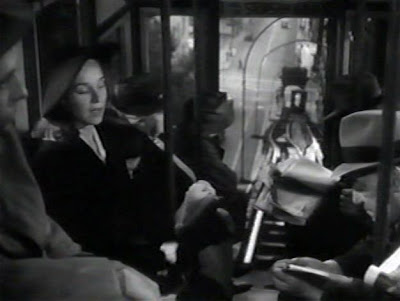 I don't suppose there's any reason to have this scene on this funicular, it has nothing to do with the plot, but it makes for a nice foray into Los Angeles﻿ sights, and "The Unfaithful" is full of them.  I remembered seeing this same funicular in "The Turning Point" (1952) -- a movie we'll have to discuss sometime or other. 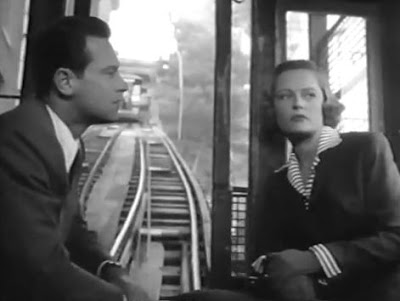 In that movie, we see William Holden and Alexis Smith riding the steep railway as they ferret out a mystery.
The funicular is called Angel's Flight Railway, and was built in the Bunker Hill area of downtown L.A. in 1901.  I understand it has been filmed in a handful of movies, 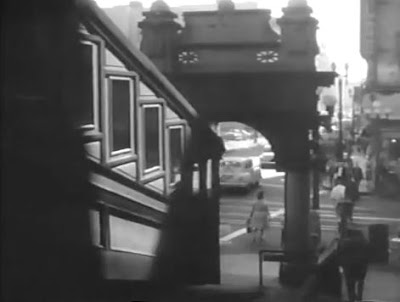 Another shot from "The Turning Point"
The original Angel's Flight was dismantled in 1969 when the area underwent an extensive urban renewal project, and a lot of the, now rundown, but historically significant buildings in the neighborhood were demolished. 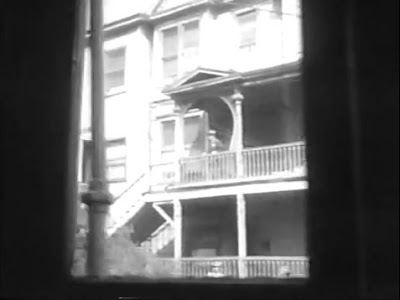 Here in "The Turning Point" the camera pans out the window and we can see an example of what the neighborhood looked like before it was demolished.
The funicular is only about two blocks long.  It was built at a time when the Bunker Hill area was fashionable.  It continued to be used as daily transportation by working-class people when the neighborhood demographics changed, and finally, torn down when the promise of the future came, as it did to so many cities, in the form of really ugly 1970s steel-and-concrete urban renewal projects. 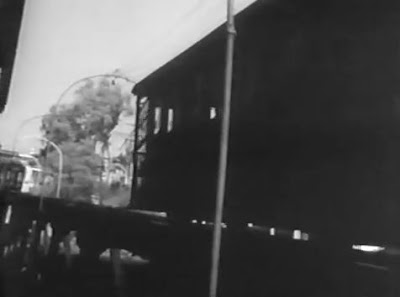 Funny, though, that our wish to be modern fights our wish to be nostalgic.  Giving in, perhaps, to this secondary urge, as well as the desire to turn any attribute into a tourist attraction, the Angel's Flight was re-created a little bit south of where the original stood.
You can read more about the controversial history of the new Angel's Flight Railway here, with some photos. 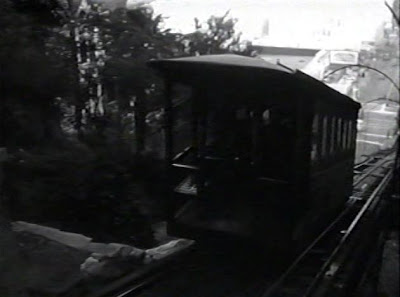 Another shot from "The Unfaithful"﻿
Posted by Jacqueline T. Lynch at 8:03 AM

Very interesting. It always seems a shame to lose the things which give a neighbourhood its character.

One of the great things I love about movies is how they preserve the past. This is a great example.

Fascinating. I knew nothing about the Angel's Flight railway. LA isn't my favorite town but the TCM film festival has been making it seem more and more attractive. And now, another reason to take a trip to the south...

CW and John, it's interesting when you think that the directors of these films had no idea they were preserving the past. Their viewfinder scope of these places was quite unselfconscious about things like that.

Lady Eve, unfortunately, I didn't know about the railway the last time I was in LA, which was several years ago, or else I would have checked it out too.

Loved your post as I always enjoy spotting Angels Flight in movies. Another which comes to mind in which it can be seen is CRISS CROSS (1949).

Have seen THE TURNING POINT but need to catch up with THE UNFAITHFUL, your post really intrigued me. :)

Dang, "Criss Cross" slipped my mind. The Angels Flight must have been a terribly busy spot in the Noir years.