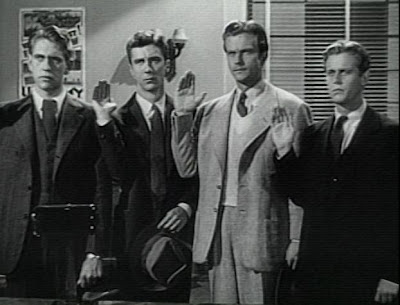 “Hollywood Commandos” (1997) is a made-for-television documentary that classic film buffs, as well as students of World War II history, should see.  It tells the story of one Army Air Corps unit that profoundly altered the training of troops, how the war was to be fought, and documented the entire military experience of World War II from recruitment, to technology, to combat action, to the grisly discovery of Hitler’s concentration camps and the apocalyptic scenes after Hiroshima and Nagasaki.  Its home base of operations—Hollywood. 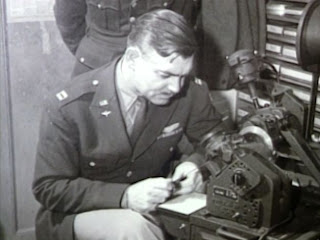 This Army Air Corp unit was called the First Motion Picture Unit, or FMPU.  Though the motion picture industry made many contributions to the war effort—in battle and home front pictures to boost morale, in welcoming servicemen at the Hollywood Canteen, and in the promotion of bond selling—FMPU was the motion picture industry’s greatest and most valuable participation.  We know that many film actors put their careers on hold to join the military during those years, but the FMPU was as if the industry itself put on a uniform.
We discussed “Resisting Enemy Interrogation” (1944) here last week as part of the Fabulous Films of the 1940s blogathon.  That film was produced by FMPU.
FMPU had its start when the Warner Bros. studio, a step ahead of the other studios to openly denounce the fascist powers of Europe and acknowledge the coming storm, produced a series of shorts about the different armed services.  Army Air Corps General “Hap” Arnold contacted studio head Jack Warner and asked for a recruitment film.  As we mentioned in last week’s post, when the US entered the war we were far behind our enemies in combat strength and had a lot of catching up to do. 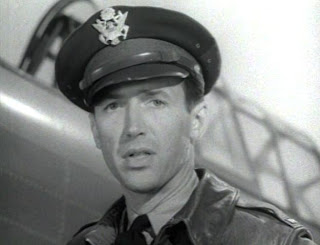 Jack Warner was made a Lieutenant Colonel (the unit would later be commanded by famed movie stunt pilot Col. Paul Mantz), and he, along with writer/producer (later Colonel) Owen Crump, launched production on “Winning Your Wings”.  James Stewart, who was already in the Army Air Corps as a pilot, was pulled off duty to star and narrate this film.  It was made in 18 days and rushed out to theaters and college campuses.
It is reported that over 150,000 enlistees into the Army Air Corps can be traced directly to seeing this movie.
So the race began to catch up to the enemy, both in recruitment and in training, and FMPU was established in June 1942.  The unit soon moved to the old Hal Roach studio.  Where Laurel and Hardy bungled their way through odd jobs, and the Our Gang kids messily marched through childhood, the new 18th Air Force Base Unit churned out training films, recruitment and morale films, and trained combat photographers. 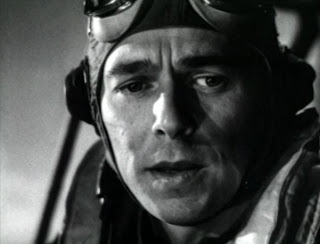 Many Hollywood technicians were called into this unit: writers, directors, cameramen, carpenters, makeup men.  Most of the actors were starting their careers and were for the most part, unknown.  This was useful in depicting the trainees as average guys with whom their Army Air Corps audience could identify.  Stars tended to take away attention from the lesson.  Captain Ronald Reagan was the personnel officer for this unit, and appeared in a few films, including “Recognition of the Japanese Zero Fighter”.  In this, he plays a trainee who mistakenly fires at an American plane piloted by Craig Stevens, who is understandably grumpy about it.  This film was made because several friendly fire incidents needed to be addressed early in the war. 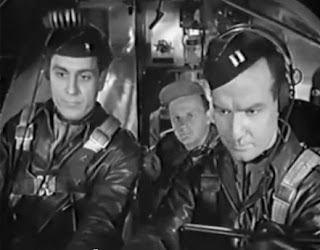 For the most part, Captain Reagan’s participation in these films was as a narrator.  Craig Stevens also appears as a pilot trainee in “How to Fly the B-26 Airplane” (1944).  Don Porter is his instructor.  It’s not as good a story as “Resisting Enemy Interrogation”, but if you can stick out watching it, you will most certainly know how to fly a B-26 airplane.
“Hollywood Commandos” is a terrific documentary that gives a glimpse into the making of these films.  Loaded with archival footage, there are also several interviews, with Owen Crump, with writers, directors, technicians, actors including Ronald Reagan, DeForest Kelly (whom we may most remember as Dr. "Bones" McCoy on the "Star Trek" TV series), and also Craig Stevens in what must have been his last appearance on film before his death a few years after this documentary was made.  Many anecdotes are told, some quite funny. 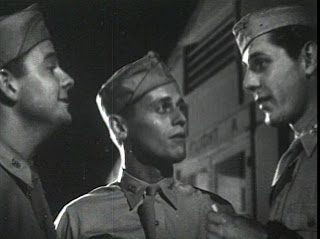 Stevens comically relates his dread of appearing in “Three Cadets” which dramatized the dangers of venereal disease and the protocol for treatment.  Lt. (later Capt.) William Orr, the father of the writer/director/producer of this documentary, had a famous role “Three Cadets”, and he tells a funny story about it. 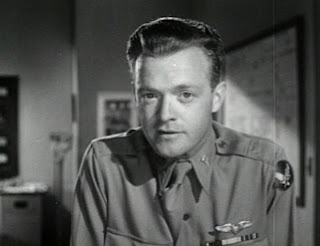 Other actors in this unit who later became more well-known include Arthur Kennedy, Van Heflin, George Reeves, and George Montgomery. 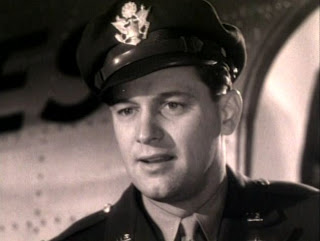 Some of the actors in this unit who were already started or well along in their careers include Alan Ladd, William Holden, Ronald Reagan, of course, and Clark Gable was attached to the unit briefly and flew on combat missions to film documentary footage.
“Hollywood Commandos” has a fascinating segment on a top-secret project to create a huge scale model of Japan, all detail done by hand, and film a virtual “fly over” to educate flight crews who would be sent on missions over Japan.
There are dramatic segments on the “Learn and Live” and “Ditch and Live” films that instruct flights crews on how to survive a crash.  These lessons were the forerunners of the US military’s later survival schools. 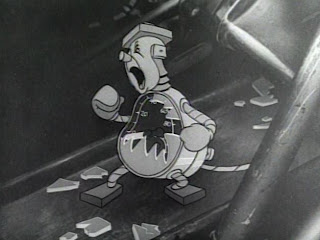 Some of the training was done through animation, and much voiceover work was volunteered by the great Mel Blanc.
“Hollywood Commandos” points out in a chilling sequence that, as it was said at the time, the first shots of the war came not from a cannon or gun, but from a camera—and we see German director Leni Riefenstahl’s jaw-dropping Hitler spectacle of the Nuremberg rallies, “Triumph of the Will” (1935).  Film was now a weapon of war, and who mastered the art of filmmaking in terms of gathering and disseminating information would win the war.
FMPU, and other film units of the various branches of the military, played a huge role in our victory. 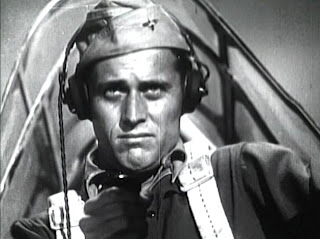 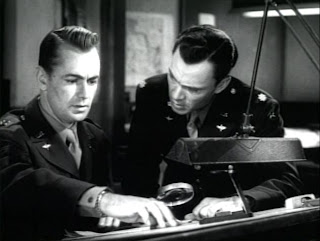 I was able to see this film by special arrangement with Mr. Orr, but the rights to this documentary are owned by AMC, and unfortunately, they have not released it either on VHS or DVD.  It should be available to younger generations to see and learn about the immense value the film industry had to the generation that fought World War II.
Maybe you can help.  I would ask readers of this blog to contact the AMC network here: amccustomerservice@amcnetworks.com and request that they either broadcast “Hollywood Commandos” again, or make it available for sale as a DVD. 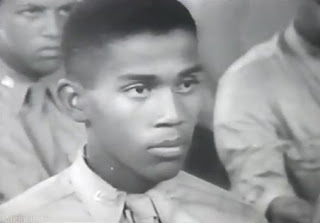 I leave you with one more film, and I urge you to watch it.  It’s not long, only about nine minutes, but here Ronald Reagan narrates “Wings for This Man” (1945).  It is about the Tuskegee Airmen, first unit of African-American pilots and flight crews in the Army Air Corps.  We may sometimes dismiss wartime films under the umbrella label of “propaganda”, but that label does a disservice to this film and any film that enlightens us on what we are, and more importantly, what we should be.
For more information on the First Motion Picture Unit, have a look here, and here.
Posted by Jacqueline T. Lynch at 7:04 AM

"Wings for This Man" is a very interesting piece of history. It spoke a lot of truths without getting overwrought, which could have been easy with the subject.

I hope to see "Hollywood Commandos" someday. The petition is a good idea.

PS: Van Heflin looks like a baby in that picture. A baby!

I really hope AMC makes this doco available. It should be seen.

Van Heflin does look pretty young. One thing that always astounds me -- how come all the guys of that generation were so danged good looking?

Sort of vaguely knew about this but not in any detail or even what it was called. Only reason I knew about Hollywood's helping hand was years ago when watching the History Channel. They would show newsreels of WWII and documentaries and such. I knew Hollywood had had a hand in some of it. And it's possible I remember watching on every early TV.

But I didn't know any of the particulars until I read your post, Jacqueline.

Of course this should be currently available for view.

Hi, Yvette. I do hope enough people express an interest in this doco to AMC. It's a good one and should be seen again.

Kent Smith did several movies for FMPU: "Resisting Enemy Interrogation" as a duplicitous German officer brought up in America (with dual accents); An introduction to Frequency Modulation, (FM Radio); "Three Cadets" yes, the film warning soldiers of the perils of VD, also with Craig Stevens and Bill Orr; and a training film for the Coast Guard. He also did the narration with Hans Conried for "Design for Death" the Theodor Geisel Academy Award winner for documentary on 1947,for it's description of Postwar Japan.
Kent Smith was extremely credible.

Kent Smith was certainly one of the most reliable actors of his era, and I think quite likeable. I agree he was very credible. Thanks for continuing the discussion, Abbe.