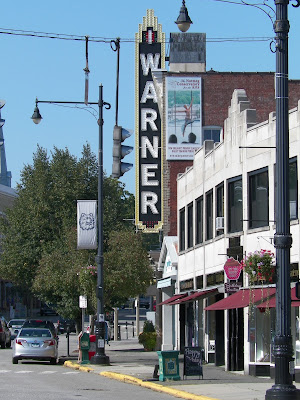 Northwestern Connecticut is mostly rural farmland dotted by small factory villages on narrow rivers, but the glamour of Hollywood found its way here on Main Street in 1931 when the Warner Bros. Studios expanded their chain of theaters. A typically beautiful movie palace of its day, the Warner was sold by the studio in the 1950s when all the studios were forced to divest themselves of their theater circuts.

Then the 1955 Flood wreaked havoc in the area, including much damage to the theater (see this previous post on Rosalind Russell’s precarious hometown visit in Waterbury during the 1955 Flood).

The theater continued operating through its years of decline in the 1960s and 1970s, and was due for foreclosure in 1981, demolition in 1982. 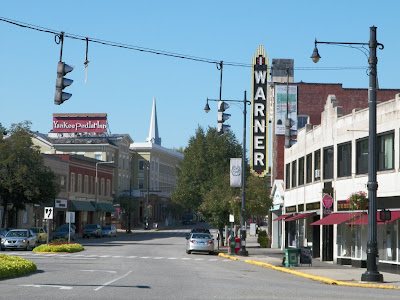 But the Northwest Connecticut Association for the Arts, Inc. was formed by citizens to save this theatre.

A couple of decades of fundraising and restoration, and today the Warner Theatre continues to grace Torrington as part of a performing arts center. Have a look here for a roster of events, and for more on the history of this historic theater.

Posted by Jacqueline T. Lynch at 8:48 AM

We have several theatres whose journeys have been just like this one, Jacqueline. It's wonderful that they are restored and at least being used for the arts, but oh how wonderful it would be to watch movies in them again!

So glad to have you back, Becky. Yes, the pattern of decline and restoration has been replayed all over the US for the fortunate theaters, and fortunate communities that save them. Probably it's easier to reuse them for live performances than adapt them to modern projection equipment. Perhaps it's not considered cost effective to show films in anything but a chain-owned multiplex. I don't really know.

Always glad to see a theater that has survived the multiplex invasion. We need to keep these treasures surviving.

looks like amazing theater. glad it's been preserved. i believe the hotel across the street is where ti west shot 'the innkeepers.'


Welcome, Mr. Jeffrey. I have read that the Yankee Pedlar Inn across the street was Ti West's inspiration for his horror movie, but I don't know if he really shot it there. I'll try to find out more about that.