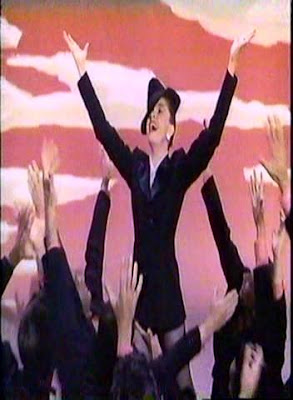 Summertime will always carry for many of us the intangible essence of freedom, the pursuit of dreams, and a sense of suspended work for play. There are plenty of tangibles that go along with this: the hot weather mainly. But if the livin’ is not always easy, the vague promise of a better life even in just a lawn chair or hammock for a handful of weekends seems like Shangri-la compared to rat race we’ve chosen for ourselves the rest of the time. I don’t know if we can really catch the idyll of summers of our childhood, but the memory of them, perhaps romanticized, is what probably pushes us to think we can. 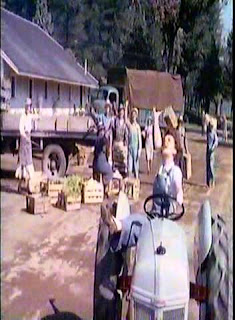 “Summer Stock” (1950) seems to evoke a lot of what is possible about achieving dreams, or just being left alone to dream them, in the summer. I doubt this was intentional by MGM, for which this was just another (hopefully) blockbuster musical with Judy Garland and Gene Kelly in a post-War era where movie musicals were just about to launch into a decade which would prove both their Golden Age and their swan song. Clearly, in the backwash of World War II, at the dawn of the Korean War, we were dreaming of the easy life, but squirming with a restless foreboding of the summer’s end.

Judy and Gene are grown ups, but this is the old “let’s put on a show” formula Judy had been playing since she was in pigtails. Her next musical four years later, “A Star is Born” would be much more grown up, if still from well-worn material. 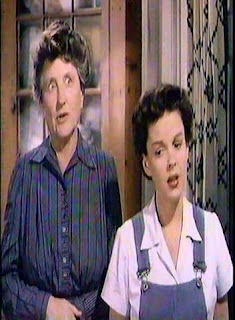 The farm is struggling. Judy’s two ancient farmhands are leaving her to go down to “Hartford way” in their Sunday suits to get jobs in factories. But, all is not lost, because kid sister is finally coming home to help on the farm. And Judy has a new tractor to help with the harvest. 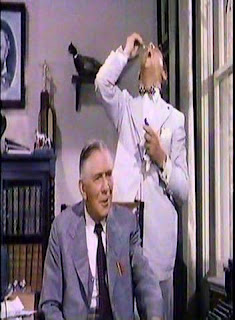 Judy’s beau, played by sickly, and very funny, Eddie Bracken, is plagued with allergies and a lack of confidence. The latter we can attribute to his overbearing father, the dependable Ray Collins in a delightfully skewered version of his usual authoratative figures. He runs the general store, in which his milksop son is the clerk. Father wants the two to be married to unite the two oldest families in the community. Judy seems sympathetic to Eddie Bracken, but in no special rush to tie the knot.

The plot thickens. Spoiled kid sister brings home her boyfriend, Gene Kelly, and Mr. Kelly’s crew of actors and stagehands. He is a hopeful young director, and spoiled kid sister has promised him the use of Judy’s barn to put on his show.

We mentioned in this recent post about “A Stolen Life” (1946) how old movies depicting rural New England frequently demonstrate our apparent love of square dancing. But, as we see here, barns in New England (uh, that’s b-a-a-h-n-s), have another use. No, not for housing cows. That other use, summer stock, which is often called The Barn Circuit. 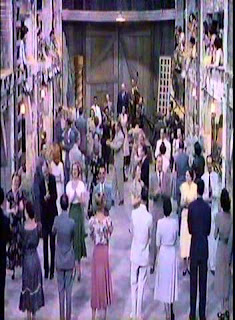 Here we get a two-fer deal, as Judy’s barn is the setting for both a square dance and a summer stock theater. According to Ray Collins, “Square dancing is part of our tradition.” The scene begins with a very proper Portland Fancy (which is an old-time contra dance very popular in New England once upon a time and can still be found in the odd place or two of a summer evening). In this post in my New England Travels blog about the scrapbook of a young girl, you see a dance card from the early 1920s, on the back of which lists the dances to be performed. One is the Portland Fancy.

Before too long, however, this b-a-a-h-n dance turns to be-bop, as the rowdy acting company takes over, and this is only a small bit of havoc they wreak on the farm. Ray Collins is mostly incensed at their presence just because they are, well, actors. You know what theater people are like. 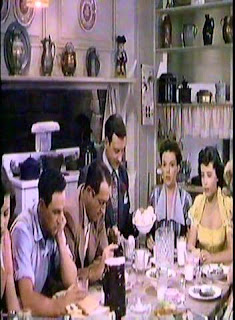 Mr. Collins reminds Judy that her ancestors were part of the community in 1694 that banned “theatrical entertainment of any kind.” This sounds bombastic, funny, and ridiculous, but it’s not. It’s historically true. Puritan, and then Victorian, New England had such a hard time accepting theatre that some early theaters, like the Boston Museum, called themselves…well, museums. Author of “Little Women” Louisa May Alcott loved to attend plays at the Boston Museum. She and her sisters even play acted stories at home in Concord. In the b-a-a-h-n.

At some point in the 20th century, old prejudices died out enough for rural New England communities to take visiting actors as guests in their homes when they played at the local summer stock theater. There weren’t a whole lot of Ramada Inns or quaint B&Bs back in the day, so the theatre folk relied on a spare room where it was offered. 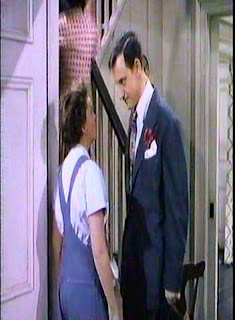 In “Summer Stock”, we have the wonderfully boorish Hans Conried as the lead actor, a peacock who smoothly turns everyone into his servant. He rates his own bedroom in Judy’s farmhouse, while the rest of the cast bunk out in the b-a-a-h-n.

The women are separated from the men, of course, in the dormitory hay loft, with ever-vigilant Marjorie Main guarding their virtue with a double barreled shotgun. Yes, sir, all the comforts of home.

Back to Judy’s troubles. Wanting to support spoiled kid sister, she allows the show to go on, provided the actors help with the farm chores. Never ask Phil Silvers, who plays Gene Kelly’s inept and brutally annoying sidekick, to do anything for you. 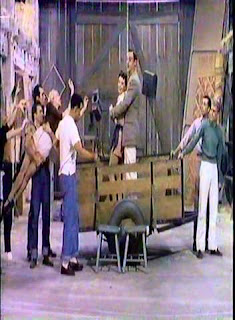 We see the rehearsals which, because they are performed regular clothes, with a box and an old cart for sets, look silly and amateurish. We cannot imagine what the show is really supposed to look like, but they can because it’s their show. Like children, it is real to them. They are living their summer fantasy.

And Judy and Gene fall for each other. Nobody wants to hurt anybody, but this is a musical, and everybody gets hurt. 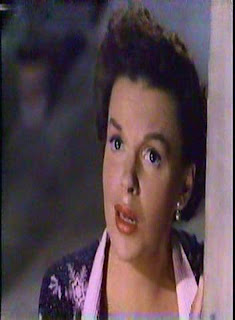 Judy must have been hurting pretty badly in real life about this time. “Summer Stock” has come down to us as the third and final time she was paired with Gene Kelly, the last time she ever worked for MGM, and the movie that was filmed during one of her worst periods of rocky health due to drug addiction. There are backstage stories with this as with just about every film, but what’s remarkable is you’d never know it by what you see on screen.

Judy Garland was what many called a triple threat: she could sing, she could dance, and she could act. Anything she turned her hand to on stage, she did well, and often brilliantly. Here we see her precise comedic timing. She could do more with a look or a gesture than the other comics could do with pages of the best material.

She displays swift and sudden sadness, brittle disappointment, and her eyes tear as she speaks. She makes you believe her. Then she does the “Get Happy” number, filmed after the rest of the movie was in the can, having lost some extra pounds and looking fabulous. How many times had she pulled a rabbit out of the hat? 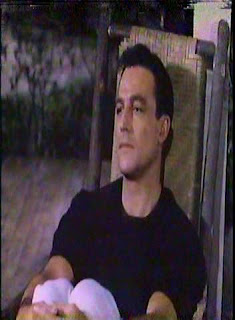 She certainly pulls a hat trick in this movie, in real life, and reel life. Spoiled kid sister takes off with Hans Conried and Judy must save the day. Gene coaches her, and she does a Ruby Keeler act, learning all the songs and dances in a couple days so they can have still have opening night in the b-a-a-h-n when all the big producers from Broadway will be there.

The acting company names itself “Falbury Farm Players” and their show is called “Fall in Love.” About the second most vague title in play-within-a-movie history, losing out to “Playing Around”, which was the show Bing Crosby and Danny Kaye produced in “White Christmas” (1954). Which was put on up the road in Vermont. In a b-a-a-h-n. 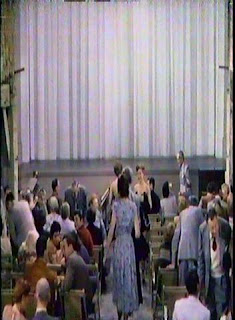 We see numbers from the big show, and we know that Judy and Gene are sweethearts now as well as co-stars. What we don’t know is if she can give up her family farm to become his leading lady in New York. We don’t know what the judgment of the big time Broadway producers is, because the show ends at the final song. There is no one running up from the audience with a contract. The song ends, a playful parody of barnyard hijinks with garish colors and arms thrown upward as if to send that last high note on its way. Roll credits. 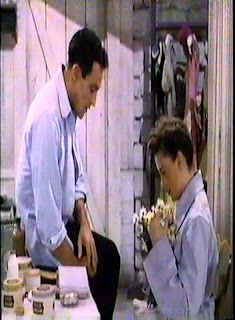 It’s a summertime moment, where the adults are kids putting on a show, and act out their dreams, and don’t worry too much if they are practical or even possible. It is a suspended moment. We don’t hang around for harvest time.

This film was made in 1950. For more on Hollywood actors appearing in real New England summer stock in the summer of 1950, have a look at yesterday’s post in my Tragedy and Comedy in New England blog.

Below, have a look at the trailer for “Summer Stock”, and also for Judy’s “Get Happy” number.

Posted by Jacqueline T. Lynch at 6:23 AM

Judy was almost unbelievably gifted. You can watch her and listen to her, and it leaves you breathless.

Ray Collins had a great knack for comedy. When I was a kid I always hated to see him sneak up on our hero in "Perry Mason", but nowadays I live for a rewatch of "Francis the Talking Mule" or "The Bachelor and the Bobby-Soxer".

Hi, Sticker Printing, welcome to the party. Thanks for stopping by.

Caftan Woman, I agree about Collin's comedy knack, which always seems to take me by surprise because we usually see him in drama. Your comments about Judy are spot on.

Maybe I'm overly sensitive, but I don't like watching Garland in color. Her eyes always look so sad to me.