The Long Beach Airport in Long Beach, California, specifically its Art Deco style terminal building, has been used in a number of movies over the decades. Among the films with scenes shot here are “The Bachelor and the Bobby-Soxer” (1947), “Executive Suite” (1954), which we’ll discuss in more depth down the road, and “Key to the City” (1950). I believe some modern TV shows have also used this location. 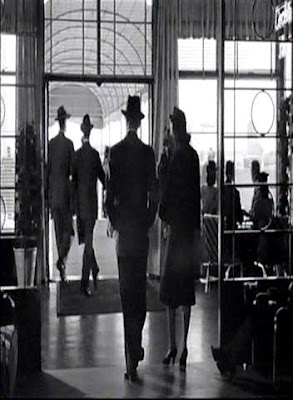 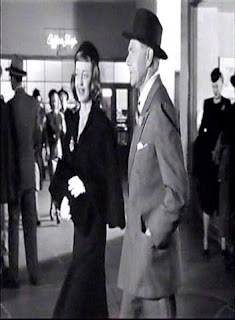 I stumbled on this airport film history accidentally while watching “A Stolen Life” (1946), discussed in this recent post. When Bette Davis was striding through an airport terminal, I suddenly noticed markings on the floor that looked familiar. They turned out to be that map of the world with lines drawn connecting airline destinations we see in the opening scenes of “The Best Years of Our Lives” (1946), when Dana Andrews lugs his overstuffed suitcase across the terminal, looking for a flight home.  Aha, same airport terminal, confirmed by our friends at the IMDb website.

I don’t suppose that shot is discussed that often as a “message image” in this landmark film on the homecoming of three servicemen after World War II, but for me this view of Dana Andrews walking, encumbered with his bag, across the map of the earth in his weary journey home is iconic. 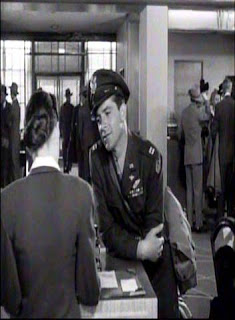 I don’t know if director William Wyler thought of the image that way, but Dana walking across the map seems to set up the stories of these three men arriving from all corners of the earth to get home, and getting stuck, for the moment, at a modern civilian airport that can’t get them where they want to go. It will service the businessman with his golf clubs, but Fred, Homer, and Al must trudge to the Air Transport Command in a ramshackle hangar across the field.

In “A Stolen Life” there is no such greater meaning to the airport terminal, except that Bette Davis is meeting her cousin here while she is pretending to be her twin sister. It is a place of meeting and greeting and new beginnings overshadowed with foreboding. 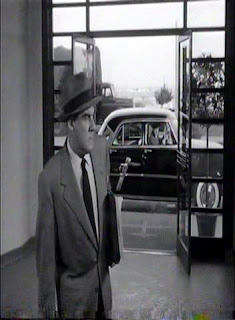 In “Executive Suite” there is also intrigue in the form of a corporate takeover and executive businessmen jockeying for position in a faltering company. We see Paul Douglas being tailed by Fredric March here, and William Holden and Walter Pidgeon conferring on strategy. All their comings and goings center on business trips. Here the airport backdrop is a place of hustle and urgency. We don’t get to see a shot of the floor in this one, and I’d love to know if that old map is still there. 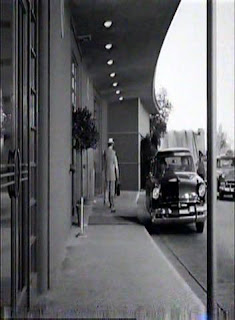 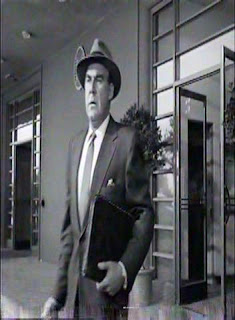 The Long Beach Airport was built in the late 20s, and commercial aviation began at least by the mid-1930s. The Art Deco style terminal building was constructed in 1941. 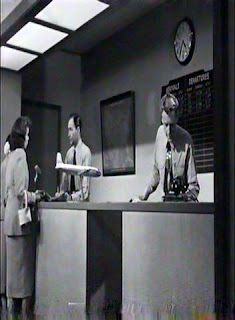 Dana Andrews is underrated. He was unforgettable in The Ox-Bow Incident, and as good as anyone else in Best Years, which of course had a great cast.

I agree Dana Andrews is underrated, or at least was once upon a time. I think his acting abilities are more appreciated now by classic film fans.