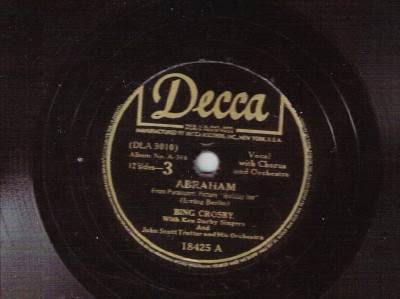 Lincoln’s Birthday, having been usurped by the all-purpose Presidents Day, is no longer the block on the calendar it once was, but with the many references to President Abraham Lincoln during the inauguration of President Barack Obama, Honest Abe seems to be more in the news than ever.

The connection between Lincoln’s legacy in popular history as it pertains particularly to African-Americans remains at the front of his memory. Today on the 200th anniversary of Lincoln’s birth, we have this clip below from “Holiday Inn” (1942) to examine one Hollywood interpretation of that relationship.

The clip is cringeworthy camp. I can remember broadcast television showings where this scene was omitted, and not just to fit in more commercials. It is, after all, a bit uncomfortable to watch. Leaving it out may make watching this otherwise lighthearted froth of a movie less offensive, but leaving it out is a lie. By watching the scene carefully, we can learn a bit more about a wartime era when our armed forces were still segregated, when popular entertainment leaned heavily on exaggerated stereotypes.

The song is pleasant, another one of Irving Berlin’s patriotic tributes to his adopted country that make up this movie. As illustrated by the photo above, it was also released on a 78rpm. Listen only to the song and you have a stirring tribute in a big band flourish, and Bing Crosby’s steady baritone.

Open your eyes to watch the film clip, and you must really open your eyes to some other things. The stars in blackface, giving it their all as it once was performed in hokey minstrel shows from the 19th century up through the middle 20th century in vaudeville. The chorus in “mulatto” makeup and costumes meant to turn Holiday Inn into a cartoon plantation setting where happy slaves evoke the name of their savior, Abraham.

The only thing more ridiculous looking than Bing Crosby in this scene is the unfortunate Marjorie Reynolds, who bounds out like Harriet Beecher Stowe’s “Topsy” having just ingested some mind-altering substance. It may be laughable, but becomes all the more embarrassing when one realizes this performance is not meant as an insult, but intended as good-natured parody. The condescension in this scene does not seem to be apparent to Bing or Marjorie, the chorus, or the director or studio.

We see it. Many others saw it as well in the era when the film was made; not everyone was so blind. This kind of entertainment was already on its way out. The explanation in the plot for the use of blackface was to hide Marjorie Reynolds from being recognized by Fred Astaire, but the “cover story” if you will, is just to give credence to a typical Lincoln’s Birthday minstrel routine that was now becoming passé. This scene is a museum piece in more ways than one. The “Abraham” number was reused as an instrumental piece in “White Christmas” (1954) some 12 years later, for a fast-paced dance featuring Vera-Ellen. A big production number in “White Christmas” also salutes the days of minstrel shows. Nobody wears blackface.

But keep watching the original “Abraham”. Louise Beavers turns the scene on its ear. The warmth and sincerity she exudes singing to her children is what makes Bing and Marjorie all the more silly. She has dignity, and this was Abraham Lincoln’s great gesture to his fellow Americans of every race, the idea that human beings were born with innate dignity, and nobody could take it away from them, even if they took away their freedom. People can only give up their dignity willingly, which is what Bing and Marjorie are doing in this scene.

No matter that Miss Beavers has only a couple lines to sing in a movie that is a musical; no matter that one line includes the word “darky.” She’s got dignity to spare, which is good because Bing and Marjorie can really use some help to save this number.

I like to think that director Mark Sandrich saw that too, and that was his intention, this striking and moving comparison between the black lady and the white stars in blackface. Perhaps not, perhaps he was as blind to the dignity as he was to the indignation. But the studio left the scene in, and now so does cable television.

Have a look at the clip of “Abraham” below. Enjoy the song, but don’t close your eyes.

Posted by Jacqueline T. Lynch at 7:29 AM

Speaking of "impressive posts" (thanks, by the way), this is excellent. Kudos for tackling such a difficult subject in such a straightforward, thougtful & heartfelt manner.

Thanks, John. I would hope that any uncomfortable subject can be discussed frankly if it is discussed with gentleness.

By the way, I hope our readers will scoot across the hall to John's latest "Women's Art is Women's Work" series for a fine look at 19th century children's literature: http://robertfrostsbanjo.blogspot.com/2009/02/to-prepare-boys-and-girls-for-life-as.html.

yes, this is great stuff--and I think your interpretation of Beavers' role in the sketch is very worthwhile... hard to say what Mark Sandrich thought he was doing here, but Ms. Beavers definitely seems to recognize the full import of the very strange opportunity that presented itself to her in the midst of a ludicrous situation

Hi, Anagramsci, welcome to the blog.

I like what you wrote here,
"Ms. Beavers definitely seems to recognize the full import of the very strange opportunity that presented itself to her in the midst of a ludicrous situation."

It was an opportunity to be sure in the midst of a ludicrous situation. How nice that she took the ball and ran with it.

It's a very strange sequence - the musical number is played straight enough, which makes it very uncomfortable to watch... But the way it's set up is uncomfortable in a way that seems more intentional: Reynolds resists, Bing basically bullies her into it - and he's playing a dirty trick on her anyway, deliberately hiding her. They all act embarrassed by it before they go on, which isn't what usually happens around blackface numbers in the 30s... and if I remember the plot right, it's the point where he starts working to keep her there at her expense - it's where he starts to be the villain.... So - I think there is some evidence the filmmakers knew how awkward the scene would be, and might well be using Louise Beavers as a reminder of the real issues Bing is using to keep his girl away from Fred Astaire.

Hi, weepingsam, thanks for stopping by. You've made a good point about Crosby's reticence and Marjorie Reynolds' initial reluctance to put on the blackface as clues, as well as how Louise Beavers was used, to illustrate how the filmmakers might have sensed the awkwardness of the scene.