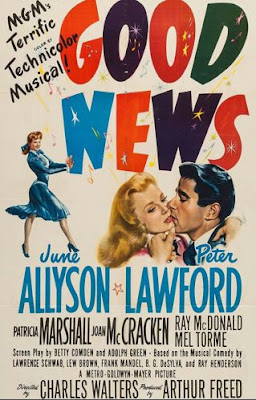 Good News (1947) presents a 1920s college campus, taken from the 1927 Broadway musical and revived in this MGM treatment. One notable aspect to this film is that none of the featured players is able to sing on key.

In some perverse way, I find this endearing. June Allyson’s and Peter Lawford’s singing limitations are by now legendary, but I especially like Joan McCracken in the comic role of Babe Doolittle. Even her speaking voice is slightly off-key, and that is just cute.

The exception to this vocal limitation among the musical stars of Good News is Mel Torme, but The Velvet Fog’s role as one of the students is so minor that he can’t help them much.

Just when did “Babe”, as in Babe Ruth and Babe Didrikson stop being a popular nickname? Oliver Hardy’s nickname also was Babe. An innocent moniker that must belong to innocent times.

The big number seems not to go to star June Allyson, but is thrown to Miss McCracken in a zippy rendition of “Pass That Peace Pipe,” where she dances up a storm to a faux-Indian war dance. Such a show-stopper, it is also featured in That’s Entertainment Part III (1994). Some of the tribes she rattles off so impressively are not the names of tribes, but rather are place names. One assumes these words are used to conveniently complete the rhymes, or perhaps the writers did not realize that American Indians had names for things other than themselves. A small point, but file this under my unfortunate fascination with the mundane. Nice touch that her dress, while, with its geometric pattern meant to invoke an American Indian motif and make her stand out from the rest of the dancers, still manages to look like a street dress and not a costume.

A note on the costuming and hair: only some of it seems to accurately depict 1920s styles. The rest is straight out of 1947.

Joan McCracken was featured in a Life magazine article of October 2, 1944, three years before this film was made. She had just made waves with a brief but featured role as a dancer in the enormous Broadway hit Oklahoma, and had captured the media’s attention. It was a breakout role for her, and Good News with her energetic dancing likewise could have been a breakout role for her. Unfortunately, it was to be her only film. With a handful of Broadway credits, and handful of television appearances, Joan McCracken died at 43 years old of heart disease related to diabetes.

Behind the college high jinks, we have a couple of other likewise more sober aspects to consider. First, is that Good News appears to be another in a string of “good old days” examinations of the 1920s that came out of Hollywood in the post-war era. Evidently the Depression, the war, and the new eerie landscape the Cold War was beginning to represent was enough to make the public (at least in Hollywood’s eyes) long for days of sweet innocence and unabashed craziness of a less lethal sort.

Singin' in the Rain (1952) was more successful at this, using parody to cozy up to a time long past, and even Sunset Blvd (1950) discussed with Singin' in the Rain here, though a dramatic turn, managed to cast a light on the supposed glamour of a bygone era a few decades ago.

The second aspect interesting to consider is that Good News would likely have had little appreciation among the modern college student of that time, many of whom were returning World War II veterans. These “kids” had already matriculated on Tarawa, the Battle of the Bulge, Iwo Jima, and all points in between. They were serious students such as college campuses had never seen before, and have not seen since. June Allyson singing “The Best Things in Life Are Free” is sweet, but likely none of these Big Men on Campus would have cared if Tait College won the football game or not.

This was a film for younger kids, high school kids probably, and older people, who were shying away from the more realistic films coming out of Hollywood, and looking for something akin to a family film. Good News, the Broadway play of 1927 might have been current events, but Good News the movie of twenty years later is fantasy, and its message, if it had any, like the singing, was slightly off-key.


Jacqueline T. Lynch is the author of Ann Blyth: Actress. Singer. Star. and Memories in Our Time - Hollywood Mirrors and Mimics the Twentieth Century. Her newspaper column on classic films, Silver Screen, Golden Memories is syndicated nationally.
Posted by Jacqueline T. Lynch at 7:29 AM

What a great review! I've never seen this film, but I have thought about "Singing in the Rain" & it's distorted nostalgia (I think t's a great film, but it gives a one-sided picture of the transition to talkies). You do a great job of putting things in context. & I love the line: "One notable aspect to this film is that none of the featured players is able to sing on key." I recall Lawford in "Easter Parade"-- you're right-- not much of a singer.

haven't seen this in a while, but I agree that it's kind of endearing that these actors got to sing (rather than suffering the ignominious fate of voice-dubbing... if only MGM had done as well by Ava Gardner in Show Boat!)

I just love June Allyson in anything, really--I know she grates on many people's nerves, but I really appreciate the combination of genuine "wholesomeness" and very evident self-knowledge that goes into her playing...

I'm really interested in nostagia generally--and it's fascinating to look at an earlier generation's version of the phenomenon... during the late forties, it does seem that longing for the 1920s began to replace longing for the 1890s in American films

Thank you, John and Dave, for your comments. I really don't mind at all that their singing is flat, I think it's funny, and I agree there seems to be something ignominious about being dubbed. Likewise, even though singing was a stretch for both Marlon Brando and Jean Simmons in "Guys and Dolls", I'd still rather hear their real voices than dubbing.

The nostaliga craze, I guess it hits every generation over different eras. It all ends up being caricature of one sort or another. We are perhaps too fond of, and therefore, too forgiving, of the past, or using the past too literally to search for solutions to problems in our present.

June Allyson was certainly very charming. Good comedic timing. There are very few stars who actually grate on my nerves, and I've learned over the years that an actor who one person despises is bound to be another person's absolute favorite.

Goes to show you how bad my musical ear is, I never noticed that they were off-key.

I always watch this film to escape, so I can see how it worked as an escapist vehicle in the '40s. Makes sense!

Hi, Raquelle. They're not really horribly off-key, not to set dogs howling or anything like that (I think). Just a bit flat. Each of them (Allyson, Lawford, McCracken) has a limited vocal range, but since this is such a lighthearted movie, good for escape as you say, there's nothing so terrible about it.