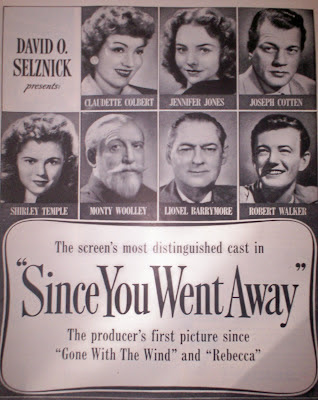 This magazine ad for “Since You Went Away” (1944) was published in June of that year, for the film’s release in Hollywood that month, and nationwide release in July. It appears to be a fairly modest ad for all the attention producer David O. Selznick lavished on the film, the first of his many attempts to top the spectacle of “Gone With the Wind” which haunted him as much as it gratified him.

It may not have garnered the same box office or critical acclaim that “Gone With the Wind” did, but I would guess that through TV, DVD and VHS, more people have seen “Since You Went Away” and have seen it more often. It seems to have become a sentimental favorite of many in a way even the magnificent “Gone With the Wind” has not. What are your thoughts?
Posted by Jacqueline T. Lynch at 7:20 AM

Email ThisBlogThis!Share to TwitterShare to FacebookShare to Pinterest
Labels: David O. Selznick, Gone With the Wind, now playing, Since You Went Away

I can't agree that more people will have seen Since You Went Away than Gone with the Wind. I understand why it could be a sentimental favourite, but when I saw it I thought it was overrated. I much prefer Claudette in her scewball roles.

Hi, Tom, thanks for your comments. Claudette had some terrific screwball roles, but a few pretty heavy weepies in there, too. She was great at comedy.

What I mean by more people seeing "Since You Went Away" is that GWTW is not shown on TV nearly as often over the past few decades, particularly in the 1970s and 1980s when GWTW was still presented as a major television event. Even though it is now readily available, despite the deserved reverence for the film, I just have a feeling less people "make the committment", if you will, of watching it.

I think the same can be said of "Citizen Kane" which most critics laud as the best movie ever, but which I think is viewed less often than other films.

In any case, due to financial difficulties, I believe Mr. Selznick gave up his rights to GWTW early on, so were he around to profit by his residuals today, it would be due to "Since You Went Away."