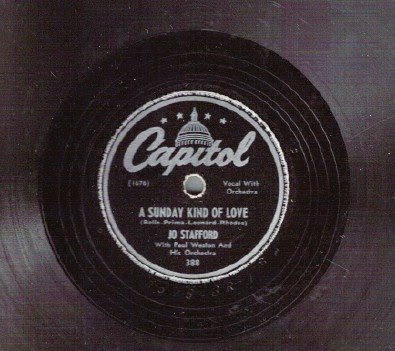 Jo Stafford died last week. A pop singer, her career extended from the big band era to the beginning of the Rock n’ Roll era, which left singers like her without much publicity as the record buyers became younger. She sang publicly only rarely after the mid 1960s. Thus, most obituaries on Jo Stafford have stamped her as forgotten, or at their kindest, little remembered.

The pop culture of the 20th century, that bold and brazen time of innovations and experimentation, is slipping away from us with each icon to depart for heaven. A word, then, about Jo Stafford for the younger readers who haven’t heard the good word.

Jo Stafford was the single most versatile pop singer of her day. She had a rich mezzo-soprano voice, with an astonishing musicianship to her singing. That may have come from early operatic training, or maybe from her days of singing complicated harmonies with The Pied Pipers, or maybe from her days with bandleader Tommy Dorsey, who was considered a rigid taskmaster by some and a tyrant by others. Wherever her work ethic or her musicality came from, she possessed a spirit of song where other singers merely sang.

Yet, what she did was simply sing. Unlike other singers of her day, she did not employ gimmickry or mimicry or showmanship to “sell” a song. She just sang, with her heart, and her guts. Her style was one of shy invitation, of confessions of unbearable longing, and at the same time, a sense of comforting. Perhaps this is why she was such a favorite among servicemen during World War II and the Korean War, who affectionately dubbed her “GI Jo.” She expressed that touch of wistful need and yet carried an almost subliminal message that somehow everything would be all right. In some situations, like war I imagine, you really need to hear things like that. Listen here to “You Belong to Me."

Jo Stafford could put across a ballad like nobody else. “Early Autumn,” “Midnight Sun,” “The Folks Who Live on the Hill,” and “I Didn’t Know About You,” come to mind. But she did not restrict her repertoire to merely modern ballads. Her interest in music also brought her into the realm of American folk songs, where she was among the first to record this traditional music. Listen here to her achingly lovely version of “Shenandoah.”

She could sing jazz. She could sing pop. She could sing church hymns. She could sing Broadway show tunes. She recorded them all. She had the widest repertoire of any singer of her day. She also had a wickedly silly sense of humor. Listen here to her so-called “hillbilly” version of the formerly sultry hit “Tim-Tayshun.”

When she and her husband, musician and conductor/arranger Paul Weston entertained friends at parties by pretending to be “Jonathan and Darlene Edwards,” the worst, most off-key lounge act in the history of the world, they discovered they had a brand new act. The only Grammy Award Jo Stafford ever won was for her riotously tortured performance as Darlene Edwards, butcher of songs.

Jo Stafford had a brief fling at the movies, as just about every pop culture figure did then, from sports heroes to band singers, and TCM will show “Du Barry Was a Lady” (1943) on Wednesday, which features Jo in a couple of numbers. She also did some backup singing for Alice Faye.

Here are the traditional obituaries from The Washington Post and from the Los Angeles Times. But the notion that she is forgotten or little remembered is not exactly true. A person may be ignorant of her career, especially if he has little interest in pop music of her era.

But anyone who has heard Jo Stafford could never forget her.

For more on Jo Stafford, kindly have a look at this terrific interview by Bill Reed.
Posted by Jacqueline T. Lynch at 7:36 AM

What a beautiful tribute. I am ashamed to say that I had not heard she died until I came here. I certainly remember her; my parents had some of her records and hers was a pure, delicious, rich voice. Forgotten? I hope not.

Hi, Campaspe, thanks. Hopping around the blog world, it's nice to see that a few do remember her, and invariably express the same kind of captivation.

Stafford's not forgotten. In fact, some of us are only just discovering her music. When I'm blogging FotY I like to listen to music from the year in question to better get in the mood. I played Stafford's 1946 version of "Symphony" over and over marveling at her precise control over that gorgeous voice. My better half prefers the lighter vocals on 1948's "Ev'ry Day I Love You (Just a Little Bit More)"--I've grown to like that one too 'cause I know whenever she plays it I'm doing something right around here! :D

Hi, Thom. So glad to hear she's got some new fans. Your comment at her precise control over her voice is one noted by many people. It had to do with her early voice training, probably. As noted in the interview by Bill Reed to which the post links, she herself remarked, "I was the only singer where the red needle on the [audio] meter didn't move."

I understand her control of her voice in the music world is called a lack of vibrato. In basketball, I believe the term is "nothin' but net."

I am sorry she is gone. I used to listen to her old 78s and try to emulate her lovely voice. What a teacher. She had such control and emotional emphasis.
Songs she recorded like Day by Day, Embracable You and You Belong to Me are simply the ultimate renditions to me. She was the best.

Welcome, Anne, and thank you for reminiscing with us on the great Jo Stafford. I agree about her sublime control and emotional emphasis in her singing. She was the best, all right. Thanks again.

Such an amazing talent. Her version of You Belong to Me is my parents favorite song.She has one of the best version of this song.She will be missed.

Thank you so much for your kind words. I was upset that when Jo Stafford died it was but a foot note in the newspaper where Angelina Jolie received front page coverage because she was adopting another baby from Africa. There seems to be a movement to cover up and diminish the past.

For people who are familiar with past music, past art, past literature, and past film, I think we are able to hold fast to, and take pleasure in, what we regard as superior, despite new fads and tastes from a younger audience. They're the ones I feel sorry for, if they never experience the greatness produced in prior decades. Thanks to audio and video recording, much of it is still there for us to enjoy. Time moves on, tastes change, but we are still free to pick and choose.