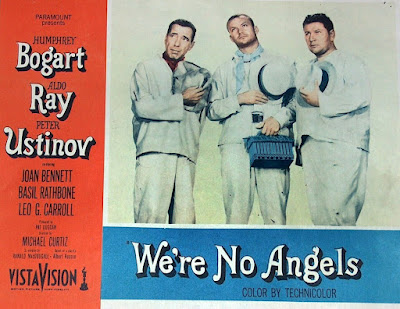 We’re No Angels (1955) cheekily teases us about our own Christmas sentimentality with an unabashed romp of black humor and goofy good will toward men.  And a murder. 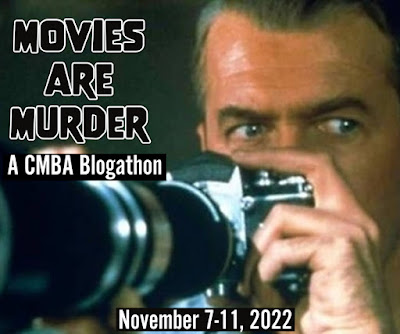 This is my entry into the Classic Movie Blog Association's "Movies are Murder" blogathon.  Have a look at the site here to see the other great blogs. 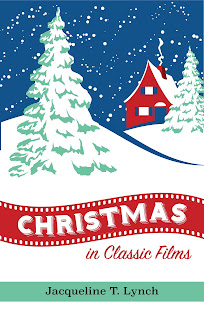 This post also serves as my intro to a countdown to Christmas coinciding with the launch of my newest book, Christmas in Classic Films.

It is Christmas Eve, 1895 in French Guiana, where three convicts have escaped from the prison at Devil’s Island.  They are Humphrey Bogart, Peter Ustinov, and Aldo Ray.  They do not shoot it out to escape, but rather employ playful charm and Boy Scout-like helpfulness to hide with the family of a local storekeeper until they can board a ship that will take them away back to France and freedom.  The only real weapon they have is their wits and Adolphe, a poisonous snake.

The storekeeper is Leo G. Carroll, befuddled and incompetent, who allows the convicts to repair his roof, not knowing they have escaped.  Joan Bennett is his flighty wife, and Gloria Talbot is his teenage daughter, who spends much of the movie fainting and being carried around by lecherous Aldo Ray.

Basil Rathbone is the wealthy owner of the store, who arrives with his son to take over the business because it is so badly run and unprofitable.  Rathbone is a delightfully first-rate villain, an obnoxious, arrogant, sneering scene stealer who forbids his son to have anything to do with Gloria Talbot, and breaks up their budding romance, not that the son seems to mind that much.  He knows which side his bread is buttered on.

The convicts step in to help Mr. Carroll’s family—they work as sales clerks, they artfully fix up his ledger, they arrange a magnificent Christmas dinner for the family with little luxuries they have stolen.  It’s not certain if they like Carroll’s family so much or just hate Basil Rathbone with a passion, but they stay to defend the family, even to the point of killing Rathbone and his son.

Well, they don’t actually do it.  Adolphe, the snake, bites them, but the convicts let him. 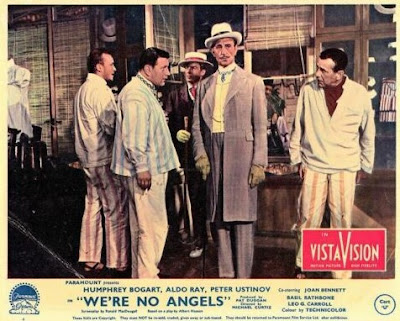 Some charming moments are finding Bogie completely at home cooking in the kitchen wearing a pink frilly apron as if to dare us to laugh, and the trio singing the hymn, “Three Angels,” which they perform for the family.

The dialogue is fast and witty, and very dark.  They frankly and disarmingly discuss their crimes, display a taste for violence with odd joie de vivre, and the film generally defies not only our usual expectations of Christmas sentiment, but our pedestrian need for logic. Director Michael Curtiz’s last movie before this was the tippity-top of all Christmas movies, White Christmas (1954).  Perhaps his own sense of irony required a palate cleanser.

When the family is safe and the opportunity presents itself for the convicts to catch their boat to freedom, they instead decide to return to prison, because it wasn’t so bad and people on the outside are not very nice.  Except for their new little family, which they decide they can always visit when they break out of prison next Christmas.  They walk away from the camera, and three halos are superimposed above their heads.  And over the little cage Aldo Ray carries that holds Adolphe.

But we know, they’re no angels.  Unless, of course, angels can be temporary manifestations when we need them.

Don't forget to check out the other blogs in CMBA's "Movies are Murder" Blogathon!

Jacqueline T. Lynch is the author of Ann Blyth: Actress. Singer. Star. and Memories in Our Time - Hollywood Mirrors and Mimics the Twentieth Century and Hollywood Fights Fascism. TO JOIN HER READERS' GROUP - follow this link for a free book as a thank-you for joining.

Posted by Jacqueline T. Lynch at 8:22 AM

When I saw the title of your movie, the first thing I thought of was the Hayley Mills movie where she's in the Catholic school -- so imagine my surprise to find this romp! It sounds like a real hoot -- usually not my cup of tea, but you've made it sound so appealing that I'm going to have to track it down, Jacqueline! Thank you for contributing this fun post to the blogathon!

Hi, Karen! The movie you were thinking of is "The Trouble with Angels," which I probably will blog about someday, I suppose. But this being a blogathon about movie murder, Haley Mills would have had to have bumped off Sister Superior, Rosalind Russell. Which would have made for an interesting movie, actually. Not that Roz would stand for that one bit.

What a charming choice for the blogathon - if murder can be charming. I am not a big Bogart fan, but he really won me over in this gem. Love the film and adore your post!

I saw this long ago and then again, for the first time in the many intervening years, a few months ago. I had remembered nothing and was both surprised and delighted at its dark and quirky take on "the Christmas spirit." I enjoyed your review - and your choice - of a film that manages to not only introduce your new book but also the holiday season and at the same time be a perfect fit for the "Movies are Murder" blogathon. Nice work, Jacqueline!

Thank you both, ladies, and for sharing in this fun blogathon. There have been some great posts by the participating blogs and I look forward to reading more.

For some reason I can't get into this film, despite the superb cast and the cheeky premise. But I really enjoyed your review, and I'm thinking I ought to give it another Go.

It's quite the oddball movie, especially for a Christmas romp.