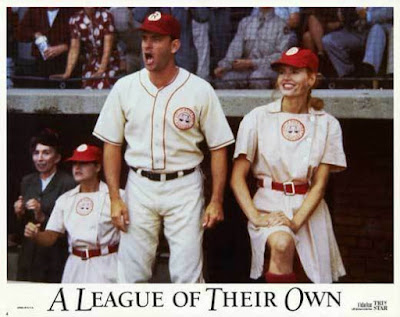 A League of Their Own (1992) is the best movie ever made about baseball.  It achieves this by also being about a lot of other things, and baseball is the conduit by which all those other things flow together.  Above all, it shows a love for the game that can only be displayed by a group of people so desperate to be allowed to play it for the joy and sense of freedom it gives them.

Though this blog is concerned primarily with classic films, I’ve always been interested in modern-day films set the past, especially with an eye towards telling the story with the style of classic films: the bold newspaper headlines, the montage of images to show the passage of time, and the gimmick of splicing in a few replica newsreel bits.  I’m a sucker for it.

This movie, beyond illustrating a period of history, actually makes history by resurrecting professional women’s baseball in the 1940s – something many people had forgotten about by 1992 and most did not know about at all.  I can recall reading a review of the movie at the time it was released by a dismissive reviewer who had no knowledge of the league and displayed very little appreciation of the movie because he did not understand the historical background.

A short-lived television series followed, and now on the movie’s 30th anniversary a new series is being launched next month, but in between 1992 and now there have been books about the subject, websites and Facebook pages created, a popular exhibit at the Baseball Hall of Fame, and merchandise promoting a league that no longer exists – including the iconic dress (literally, a dress) uniform sold as Halloween costumes.  It spawned the motto:  “There’s no crying in baseball!” 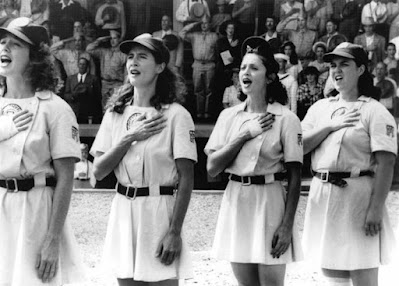 Director Penny Marshall filled this movie with heart, affection, courage, humor, and that love of baseball.   What particularly appeals to me, beyond the really excellent job of sets, costumes, script with topical references, are the smaller moments that represent something huge.

For instance, the African-American woman who catches the fastball, looks back at stars Geena Davis and Lori Petty with pride, nods, and walks away.  She will not be invited to play on the All American Girls Professional Baseball League because she is Black.  Here’s a link to the true-life story of how that lady, DeLisa Chinn-Tyler, came to be in that scene.  The scene was not in the script.  She was a terrific ballplayer, came down to try out for the movie, and like her character, was not utilized because of her skin color.  But Penny Marshall, with her great eye for telling a story, put her in this nonspeaking role for only  a few moments and left an indelible impression and told a huge chunk of history while she was at it.

I love that Geena Davis, from the moment her character as an older woman must be prodded by her daughter to attend a reunion of the team, throughout the scenes of her joining the team for her sister’s sake and becoming its reluctant star, shows the awkwardness of many women of the day who, in many fields, feel they must conceal or restrain their talent or their joy in their talent because it is considered inappropriate to be competitive, athletic, to take time for oneself to play, or deserve to be paid for any work formerly done by a man.  Moreover, her love for her sister means that even though she nags her and is overprotective, she will not lament dropping the ball in the last scene to make her sister the star.  Did she drop it on purpose?  We’ll never know, and that is another beauty of the movie. 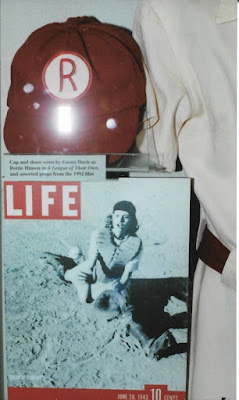 A League of Their Own (1992) exhibit at the Baseball Hall of Fame displaying the fictional Life magazine cover with star player Dottie on the cover. (photo JT Lynch)

Her daughter, in trying to get her to go to the league reunion, says, “Mom, when are you going to realize how special it was, how much it all meant?”  By the end of the movie, we know what it meant, and it seems Dottie does, too.

I love the grown Stilwell, who as a bratty child bedeviled the team (again, illustrating a situation common to women of that era – their husbands did not always take over babysitting chores), stands before his mother’s image on a poster exhibit at the Hall of Fame and we see how much he misses her.   Always makes me tear up.  We realize then that Evelyn’s not coming to the reunion. He says that he had to be there for the exhibit opening because, “She always said this was the best time she ever had in her whole life.”   We may mourn for Evelyn, played by Betty Schram, as well in the thought that her few years on the team was better than life at home. 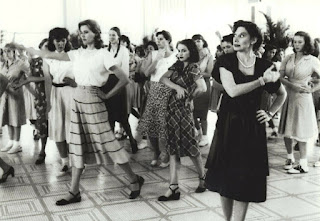 The scenes showing the women having to attend charm school may seem condescending, but I can recall reading at least one memory of a former player who said she liked the classes because she had spent her childhood in poverty, had never been inside a restaurant, and was eager to learn what she was told were the social graces.  Remember the character of Shirley, played by Ann Cusak, who cannot read her own name on the roster because she is illiterate, and the girls teach her to read on long trips on the team bus.

Spot on is the radio program of the lady protesting the formation of a league of female ballplayers, her charge being that it would make them more masculine.  As silly as this sounds, this was exactly what WACs, WAVEs, SPARS, women Marines and any female volunteering to help with the war effort faced by society, carefully chaperoned by a military that needed them but did not want to offend the public. 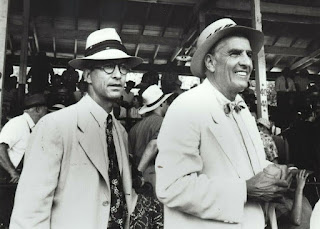 We know that Rosie the Riveter, after being lauded for helping win the war, was summarily booted out of the factories when the war was over, and the movie includes a foreshadowing of this when Mr. Lowenstein, played by David Strathairn complains to Mr. Harvey, played by Garry Marshall when Marshall wants to end the league.   Marshall says, “We’re winning the war…we won’t need the girls next year.”

Lowenstein responds, “This is what it’s going to be like in the factories, too, I suppose…the men are back, Rosie, turn in your rivets.  We told them it was their patriotic duty to get out of the kitchen and go to work, and now when the men come back, we’ll send them back to the kitchen?”

“There is no room for girls’ baseball in this country once the war is over.”

The movie gives us plenty of action, to a swing and boogie beat, and as the crowds get bigger, the stakes get higher. 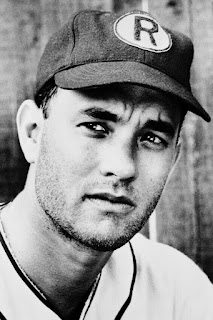 Tom Hanks plays the drunken manager, resentful at being forced to coach women, but by the end of the movie, he turns down a chance to coach Triple A to stay with his ladies.   They have all traveled far.  We almost gasp at the Hall of Fame scene to see his poster displayed with the date of his death.   He won’t be coming to reunion, either.

Marla, played by Megan Cavanaugh, the unattractive introvert who is the best hitter on the team transforms into a lovely young woman, marries before the season is over, promises to return next season, married or not, and we have the satisfaction of seeing her at the reunion enjoying an apparently happy retirement.

We don’t know what happened to the longsuffering team chaperone, Miss Cuthbert, played by Pauline Brailsford.  I feel bad for her for the mean tricks and insults she endured, but even she became one of the gang by the end. 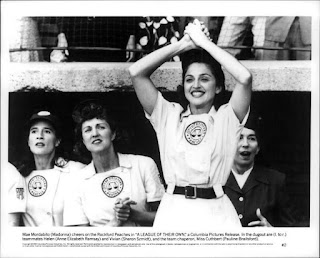 Though I have read some reviews complaining of the modern-era bookends of the movie at the beginning and end, and the modern theme music played, particularly the one over the closing credits by Madonna, who plays “All the Way Mae,” as being a depressing closing to the film. 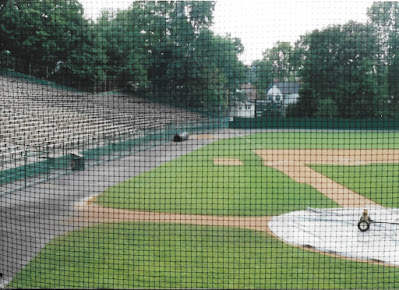 Above and below - Doubleday Field, Baseball Hall of Fame, Cooperstown, New York (photos by JT Lynch) 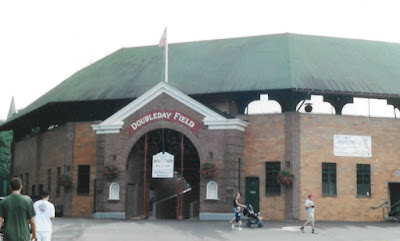 The movie is about memory and legacy as much as it is about action in the moment.  It is not just a cute story about a novelty female baseball team.  There is always some sadness in looking back, some sober reflection of how much age has changed us and our world.  We wish we could turn the clock back, but then again, we don’t.  “This used to be my playground,” as the lyrics intone in a somber refrain, is like a ghost telling us that the dream was not just a dream.  We’re waking up much older in a different reality.   It really happened, but everything is changed now and we can’t go back.  We are physically different, even if in our hearts we are still 20 years old.

It is delightful to see actual original players among the elderly ladies playing baseball in their AAGPBL sweatshirts at the end of the movie, the girls of October. 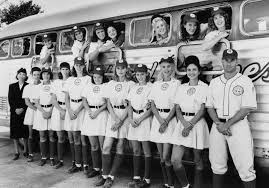 Penny Marshall gave us a chunk of history that was lost for a few decades and that is a great achievement.  The movie itself is a cultural milestone.  “That’s what makes it great” as Tom Hanks says of baseball, because it is hard.

Here is a link to the AAGPBL website with more information.

And here’s a link to members singing the team song you’ll remember from the movie.

Here's a link to the Women in Baseball exhibit at the Baseball Hall of Fame, Cooperstown, New York.