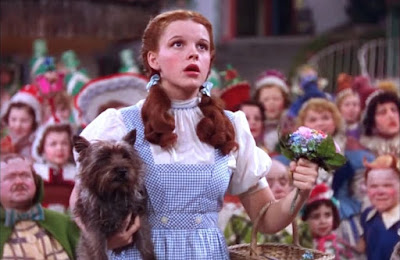 Judy Garland, having been chosen the Star of the Month, made June especially enjoyable for watchers of Turner Classic Movies. Seeing her filmography in bursts is especially poignant for allowing us to follow the bubbly, nervous, awkward girl with the phenomenal talents, as she marches toward maturity and the wonderful roles, but personal hazards, we know she will face.  There are times we just can’t study her hard enough.  Other times, knowing the perils of child stardom and harsh world that eats up the more emotionally vulnerable, we almost wish we could look away.

But we can’t.  Because she’s Judy, and she’s remarkable. 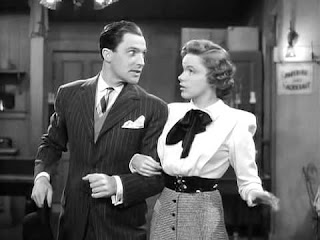 She is no stranger on TCM’s roster, particularly as most of her career was spent at M-G-M, whose films are owned by Ted Turner and WarnerMedia, the pre-1986 anyway, which is what we old movie fans cherish most.  So we do get to see her movies from time to time.  But to really feel the impact of her energy, her skill—which is an achievement above natural talent, for this girl worked hard at her craft—it’s best to see her in a string of her films, and this whole month has been a powerhouse of her impact, even in her smallest roles, which did not stay small for long.

She did not, however, shoot to stardom on the wings of the publicity department as other stars did—it actually seemed like studio boss Louis B. Mayer didn’t really know what a gem he had.  But when it was time for her to take the lead, she shone.

Most fans and critics alike seem to think her moment came with The Wizard of Oz (1939), that resonated with generations of children—and the adults they became—possibly for the ironic image of a girl on the cusp of womanhood who was taking a perilous journey, scared stiff, accompanied by a misfit trio who were not always terribly helpful, but who in spirit had her back, and she defeated a terrible villain, saved a society even as she unmasked the phony leader—who, unexpectedly, was not a villain but yet another victim of his own weakness.

But generations of children who were not old movie buffs would never have seen this movie and it would never have become an iconic experience of American childhood without annual broadcasts on television.  For free.  No cable fees, no subscription.  Not today.

Will future generations of children still feel the warm sisterly bond with Judy Garland in their fascination for this movie without it’s being a regular and expected experience of their childhoods?  To be sure, their parents and grandparents may treat them to home video (in whatever form it may take in the future) and Wizard of Oz-inspired toys, but will that die off when national memory (aside from the classic film buffs’, that is) finally lets it go?  For so many people, this movie is their introduction to classic films. 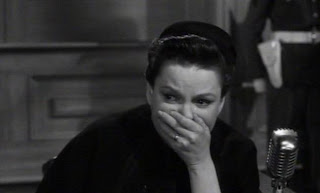 It's been lovely to hear the outpouring of expressions of enjoyment for the movies shown on TCM this month, but particularly for having the whole month devoted to Judy Garland, to giving her a showcase.  She would have been 100 years old this year, and the tragedy of having died young at the age of only 47 is part of the sadness of considering her career, that one is perhaps unable to completely enjoy her work in A Star is Born (1954) without almost subliminally remembering the train wreck of her own self-destructive demise.  In a sense, we still mourn her.  There are few people on the national stage we still acutely mourn after 53 years.

I’ve often thought what a shame it was for her that she did not live long enough if only to see her films celebrated particularly on TCM.  I like to think she would have enjoyed that, and would have made a heck of an interview for Robert Osborne.

I’ve enjoyed reading posts and comments on Facebook and on Twitter about how deeply fans feel about Judy Garland, and it is a kind of love that has little to do with awe of a big star.  There is something deeply personal she touched in people.

This month reminded me of two very different people whose appreciation of Judy Garland made an impression on me.  One, was my father. 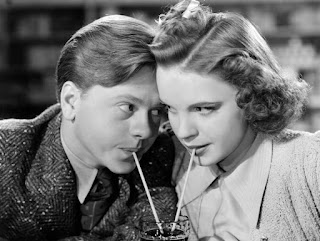 My parents were teens during the Great Depression, and spent, to hear them talk of it, pretty much the entire decade at the movies.  They were very familiar with Mickey and Judy.  When they were middle-aged and had a house full of kids, Judy Garland hosted her television variety show on CBS, The Judy Garland Show for one season from 1963-64.  Since I was a toddler at the time, I didn’t catch up with this program in until much later in life.  But I have it from an older sister who recalled that whenever the show came on, the kids had to be silent, the family plunked down in front of the TV, and my father’s face just lit up with rapture.

Now, my father was not a movie musicals kind of guy.  (My mother loved them.)  He preferred Westerns, film noir, crime dramas, political dramas, war movies.  He liked his movies on the heavy side.  He wasn’t into fluff that much.  In fact, if Jerry Lewis had ever crossed his path, my father probably would have belted him because class clown-types annoyed him. 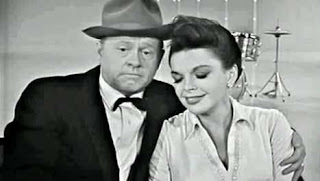 But Judy, sweet vulnerable, funny, offbeat Judy, she could do no wrong.  When she came on the 19-inch screen, in black and white and sometimes fuzzy depending on the reception, a woman in her early 40s that seemed to be pushing back with all her might at some new kind of physical frailty—well, that didn’t matter; he just beamed.  That was her power.

The second person whose devotion to Judy Garland was much younger, and I met her several years ago when she was in high school.  She was involved in the school drama club and she wanted to pursue a career in theatre.  Judy Garland was her favorite.  That surprised me, because I’d thought that young people today who have ambitions for an entertainment career might be drawn toward modern film stars, pop stars, TV stars.  But for her, Judy was tops. She knew all the songs in Judy’s career repertoire.  She identified with her in a way she perhaps did not identify with the glossier, edgier stars of her own era.  Judy was timeless.

Thank you to TCM for giving us a huge banquet of Judy this month.  For Judy’s 100th birthday, it was a wonderful gift to us.

Have a look here at these previous posts of some of Judy Garland’s films: