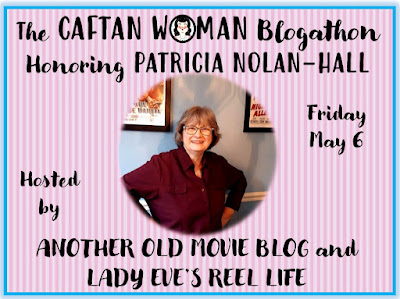 “The Caftan Woman Blogathon – Honoring Patricia Nolan-Hall” will be hosted here at Another Old Movie Blog and by Patty at Lady Eve’s Reel Life on Friday, May 6th.

On March 7th, the classic film blogger world lost one of its greatest writers and champions of classic film, Patricia Nolan-Hall, also known as The Caftan Woman, the name of her delightful blog.  You can visit her blog here.

Paddy was very supportive of other bloggers, and eagerly contributed to many blogathons, always graciously commenting on the posts of others.  It seems fitting to celebrate her time with us with a special blogathon in her honor.

Here’s the banner above, designed by Patty Schneider, to place on your blog to advertise the blogathon. (The photo of Paddy is courtesy of her sister, Maureen Nolan, used by permission.)

The range of topics on which to write is wide open, since Paddy’s interest and knowledge of pop culture was quite broad.  You might post on a movie or TV show she liked and wrote about, a genre you both loved, or about any topic she discussed on her blog (it wasn’t always about TV or movies), or about a comment she might have left on your own blog. You may post on any music, TV, or films from the silent film era through the 1960s, or spotlight stars or character actors from those decades.  Share your memories, the laughs, and the inspiration of this witty and kindly woman.

You can name your topic by leaving a comment on this post.  A blogathon page with all the entries will be posted here at Another Old Movie Blog and Lady Eve’s Reel Life on Friday, May 6th.  When you publish your post, link back to that page and leave a comment with your link so we can update the roster.

Be sure to visit each other’s posts and comment.  You know Paddy would.

Another Old Movie Blog -- The Case of Charlie Chan and The Caftan Woman.

Once Upon a Screen -- Remember Caftan Woman and her Words

A Person in the Dark -- The Binding Ties Made of Film

By Rich Watson -- Saturday Night at the Movies

I think this idea of a blogathon in memory of Patricia Nolan-Hall is a wonderful one, and I would very much like to participate. I'm thinking of Union Station (1950), starring William Holden.

Got it, Marianne. Thank you!

Happy to join this blogathon for Paddy. She wrote a great post about Paul Lukas in 2015 and I’d like to add my own thoughts on this fine actor.
Vienna (Vienna’s Classic Hollywood).

Hi Jacqueline, I'd love to cover one of the last films Paddy wrote about: The Secret Garden (1949).

Hi Jacqueline. Hosting a blogathon is a wonderful way to honor Paddy. She was always the first to register for my blog events and I would love to reciprocate by paying tribute to her. I'd like to cover "The Proud Rebel" ( 1958 ) if I may?? Paddy wrote about it for one of my Olivia de Havilland blogathons and I know she adored the movie.

Oh, and I my blog is: In The Good Old Days Of Classic Hollywood. Thanks in advance.

Hi! I'm currently listed as "TBA." I wanted to write about a film Paddy had previously written about herself for the blogathon and have chosen HAS ANYBODY SEEN MY GAL? which I was just able to see at the TCM Classic Film Festival.

Got it, Laura, thanks! So glad you were able to attend the TCM festival again. Looking forward to your impressions.

Hi there, thanks again for this lovely tribute... if we remember her yearly still so many comments from this wonderful lady, https://weegiemidget.wordpress.com/remembrances/remembrances-2022/caftan-woman/

Got it, thank you!

I'm a little late to the party but I wouldn't miss this for the world! May I join with a tribute? I have titled it Remembering Patricia Nolan-Hall, Our Classic Movie Friend.

You betcha! Welcome aboard!