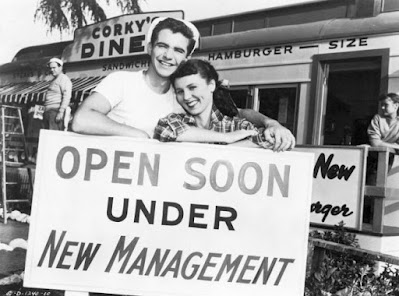 Gasoline Alley (1951) brings the popular comic strip to life, and like the strip seems to reflect that life goes on and time doesn’t stand still, for the story is mainly about main character Skeezix’s younger brother Corky.

The comic strip is the longest currently running strip in U.S. history, begun in 1918.  Unlike most strips, the characters in Gasoline Alley aged, and much of the storyline chronicles the life span of Skeezix Wallet.  Skeezix was an abandoned baby found by Walt Wallet on Valentine’s Day 1921.  Walt was a bachelor, but he took the baby in and raised him.  Walt and his pals liked to tinker with their autos – a new-fangled invention still in the early ‘20s, and so the alley behind their street was nicknamed Gasoline Alley. 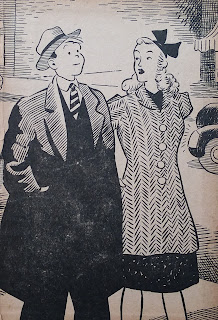 Skeezix did not remain a baby, but readers followed along his boyhood as he aged in the 1920s and 1930s – While Walt married, had another son, and then another baby, a girl, was abandoned in his car in the mid-thirties.  Walt just seemed to attract foundlings, apparently.  Skeezix joined the Army during World War II, married in 1944 and had a couple of kids of his own.  He’s a great-grandfather today, having celebrated his 100th birthday this year.

This was another strip, like last week’s Winnie Winkle the Breadwinner, that my mother loved, because she grew up with it and she reminded me many times that Skeezix shared childhood milestones with her, as they were close in age.  She talked about him as if he was a cousin. 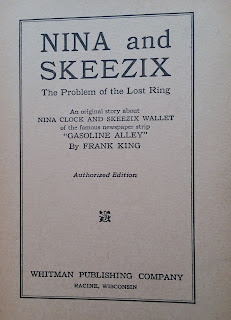 The comic strip was very popular in its day, spawning radio versions, a children’s middle-grade chapter book, and a couple movies: this one and its sequel Corky of Gasoline Alley, also released in 1951. Frank O. King, the cartoonist, is also a co-writer of this script.

Corky, played by Scotty Beckett, stars in both movies, as the focus had shifted from Skeezix, now perhaps viewed as more settled with a wife and kids, onto a younger fellow with more trouble in his life.

Corky’s main problem is his discontent about growing up in Skeezix’s shadow.  He has never measured up to his older brother’s steady qualities, and now that Skeezix has his own business – a garage called Gasoline Alley, a wife and kids and his own home, Corky wants to catch up to him.  The movie begins when Corky unexpectedly arrives home from college announcing he has quit school, and brings in his new bride.

His parents are understandably shocked, a little annoyed, and worried as heck about their boy’s habit of acting in haste.  Corky and Hope, his new wife, live with Ma and Pa until Corky can get a job and afford a place to live. 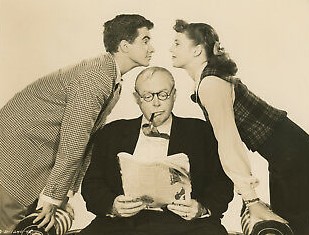 Walt is played by Don Beddoe, and he is the only person in the cast to actually resemble the cartoon character he plays, with that shock of hair pasted high over his forehead.  A great job by the hair and makeup folks.  None of the other actors look like the characters they portray, but probably could not be expected to, after all, these were cartoon drawings. That Don Beddoe looks so much like Walt Wallet is delightful and, I suppose, a little distracting.  He draws your attention in every scene he’s in. 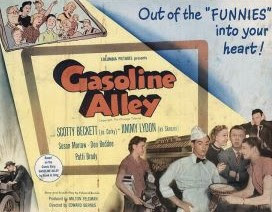 Skeezix is played by Jimmy Lyndon, who we last saw here in Life with Father (1947).  He doesn’t get much screen time, unfortunately.  Patti Brody plays little sister Judy, who has a few funny lines and delivers them well.  Susan Morrow makes her screen debut as Hope.

Corky’s first attempt at working for living is to become an underwear model for a catalogue, which has its funny moments, though a sexy woman model he meets pops back in the story from time to time as a prospective danger to his marriage.  This is no soap opera, however, and the movie’s director, Edward Bernds, transfers some of his experience on Three Stooges and Bowery Boys flicks in broad comedy sprinkled throughout the movie, especially in a wild car chase at the end. (Where, told to stop the car by throwing out the clutch, the terrified driver exclaims, “I haven’t got one, it’s Dyna Flush!”  I’m assuming this is a comic reference to the Dynaflow early automatic transmission in Buick cars.)

Corky next gets a job as a dishwasher for a restaurant, and with incredible luck, or hutzpah, decides to take a lease on a run-down diner.  Fry cook Pudge, played by Dick Wessel is along for the move – turns out he was in the Army with Skeezix, and Gus Schilling’s hired as a dishwasher with a prison record.  Corky gives him a job to help him go straight, though Schilling’s light-fingered skills will help later on when they need to stall signing a contract.  We last saw Gus Schilling here as the beleaguered TV deliveryman in Our Very Own (1950).

With his wife, Hope, as waitress, and a big loan from Skeezix, Corky’s in business and much of the movie follows the ups and downs of getting established. A wolf after Hope happens to be a shill for a competitor.  Corky and his crew run and out of the diner so often on emergencies, that at one point the cook, heading out the door, yells to a customer, “Turn off the lima beans in ten minutes!” 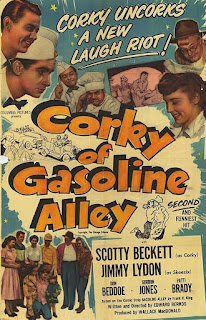 It’s possible that since two movies were made in the same year featuring the Gasoline Alley characters that it might have been intended to make a series, such as the long and successful Blondie series of movies produced from the late 1930s through 1950, also, of course, based on a famous comic strip. However, no more followed and it’s possible Scotty Becket’s own personal troubles might have played into that decision.  He’d been around Hollywood since a small child, first coming to attention in the Our Gang series.  As an adult, his self-destructive behavior destroyed his career and eventually, his life at only 38 years old.  He played his role in Gasoline Alley with great energy and likeability.

The strip continues today, having passed through its fascination with the Tin Lizzie, with the Depression, World War II, post-war family life, Skeezix's children having served in Vietnam and in the Peace Corps, and each fad and whim in succession through the last ten decades of our history. It survived by examining the small stuff of life, and then letting it go, because life goes on and time doesn’t stand still.

Next week we join the Classic Movie Blog Association’s Hidden Classics Blogathon, with a look at Till the End of Time (1946). 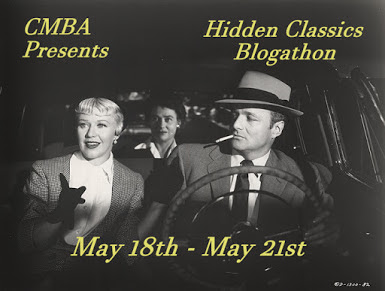 Posted by Jacqueline T. Lynch at 9:54 AM