Tom Tully - What a Character Blogathon 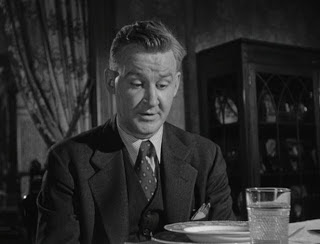 Tom Tully was an actor of great depth, who exuded grace even in his most snide, sinister, and crusty roles, and yet who could display such unassuming warmth that one could hardly imagine him ever being snide, sinister, or crusty.

Today we join several other blogs in the 9th “What a Character!” Blogathon celebrating favorite character actors of classic films, sponsored by the blogs Paula’s Cinema Club, Once Upon a Screen, and Outspoken & Freckled. 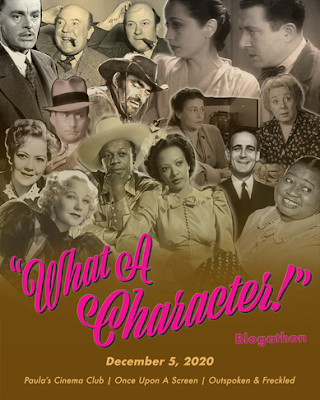 We covered some of Tully’s work in previous posts, including his genial, kindly, and somewhat befuddled uncle of Ginger Rogers, who visits him at Christmas here in I’ll Be Seeing You (1944).  He had only been in Hollywood a couple years and it was something like his seventh movie.  Mr. Tully already had worked over a decade in radio and on stage, but seems to have made an effortless transfer to screen, where he exhibits a natural, if not actually a shrewd and canny ability to navigate the intimacy of playing to a movie camera.  Like a lot of character actors of his day, he seemed a lot older than he really was.  He was in his late 30s when he played Ginger Rogers’ middle-aged uncle in I’ll Be Seeing You.  He was only three years older than her. 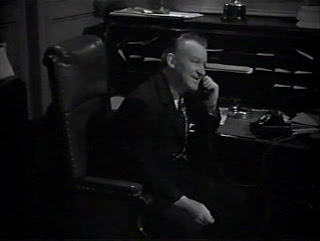 A couple years later, he straddles the genial as well as the world-weary man of authority as the police detective in Lady in the Lake (1946), breaking off an interrogation in his office when his little daughter calls and he helps her to recite “T’was the Night Before Christmas.” 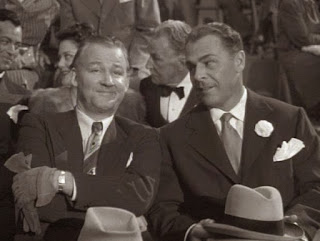 Here we covered his turn as a gangster in Killer McCoy (1947), where he displays humor, not exactly geniality, and vengeful cruelty.  It is truly an off-beat character that would probably be more cartoonish in a less-skilled, less-intuitive actor. 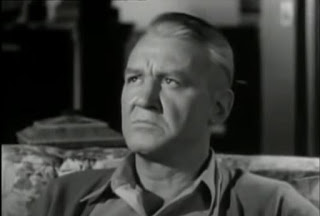 We recently covered The Turning Point (1952), where Tully, far at the other end of the spectrum from his part in I’ll Be Seeing You, plays a cop on the take, desperate to avoid being investigated by his prosecutor son.  He’s fallen between the cracks, not proud of abetting the corruption he’s supposed to be fighting, but not apologizing either, just a self-aware doomed man awaiting judgment one way or the other.

A movie I love, but have not covered yet, is The Caine Mutiny (1954), for which Tully earned a Best Supporting Actor nomination.  He plays the battle-scarred captain of a minesweeper, part of what he calls “the junkyard Navy” that is the new assignment of the movie’s protagonist, played by Robert Francis.  Tully commands his scenes, riding young Francis over the young officer’s bumbling mistakes.  We first see Tully shirtless, with a wrapping of bandage around his torso, but his wound is not explained, only that his ship has been through many battles.  He will be replaced by Humphrey Bogart, who as the infamous Queeg, will give the performance of his life as a mentally unstable commander. 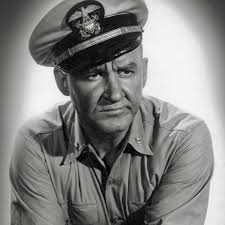 The crew respects Tully, even if Robert Francis does not, and they give him a parting gift of a watch.  It is a rough crew, and a rough captain, and yet we see blustering tenderness.  At the very end of the film, Tully returns to command a new ship, and forges a new relationship with Robert Francis, who has grown in the Navy and which Tully acknowledges by allowing him to give the first commands to get underway.

Tully is in The Caine Mutiny for only a brief time, and yet he is as memorable in the film as Bogart, who like Tully, received an Oscar nomination for his role.

Tully himself served in the U.S. Navy as a young man.  In 1969, he went on a USO tour of South Vietnam, a so-called “handshake tour” to meet the troops, where he contracted an illness which affected his circulation, requiring that his left leg be amputated.

He performed in one more film after that (having a couple decades of TV under his belt), Charley Varrick (1973), but his health curtailed his career from that point.  He died in 1982 at 73 years old.  Here is a link to an article about how his grandsons discovered Tully’s star on the Hollywood Walk of Fame and how Tully never knew he had one.

Have a look at more wonderful character actors in the great blogs participating in the "What a Character!" Blogathon.

Posted by Jacqueline T. Lynch at 9:00 AM

I enjoyed both articles (the walk of fame star) immensely.

Recent watches in this household included I'll Be Seeing You and The Turning Point. Your insightful description of Tom Tully's performances are will add to our appreciation of his work. I hope he would have been pleased.

Wonderful, Jacqueline! He had THE funniest line in a Dick Van Dyke episode. A wonderful choice!

Thanks, Paddy. I'll be watching I'LL BE SEEING YOU one of these days; it's one of my favorites. I did think that article about his grandsons and the Walk of Fame was interesting.

Christy, I don't remember his line, but I do know he played the father of Dick Van Dyke in a couple episodes. That was a great show. I wish some retro channel that I might get would run series again.

Whoa! Tully was only in his mid-1930s when he appeared in I'll Be Seeing You? Would Ginger Rogers have been about the same age?

As for The Caine Mutiny, Tully's performance is powerful. He has only a short time on screen, but he leaves a Legacy. The movie seems a little limp, at first, when he leaves the ship to Queeg.

As memorable as Tully is for his performances in many classic era films, my first memories are of him teamed with Warner Anderson in The Line-up, a long-running TV series from the '50s. Never forgot him and was always pleased to see him in movies and TV after that. He is great in The Caine Mutiny. I didn't know he'd been Oscar-nominated but he certainly deserved it. Excellent choice of "characters," thank you!

I've never seen THE LINE-UP, unfortunately, but I'd love to catch up with more of his TV work sometime.