The summer after that... 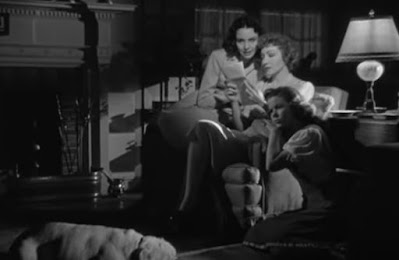 There is a scene in Since You Went Away (1944) of such gossamer poignance that we might miss the impact just because it is a fleeting, throwaway line.  But these days, I think our own experience engenders empathy and we understand a little better.

Claudette Colbert plays the mother of Jennifer Jones and Shirley Temple.  They sit together as Colbert reads aloud a letter to them from her husband, who is away in the war.  She reads the special message he sends to his daughter, Jennifer Jones: "...she must hold the thought that next year, or the summer after that, we'll be boating again on the lake..."

Jennifer lifts her head slightly and says, almost to herself, with a leaden epiphany, "The summer after that."

She suddenly realizes that the war may last a very long time.  She is seeing in her mind's eye a picture of the normal life she knew growing smaller in the rearview mirror.  She has no idea how to look ahead.

This movie, like many produced during World War II, was produced not only for entertainment value, or for the box office draw the big names would elicit.  It was produced to serve the country during a terrible time.  It was produced to remind us of homespun, democratic, decent values for which we told ourselves we were fighting; and also to give us hope, not only the hope of future victory, but the hope that we would remain unchanged and our regular lives of comforting normality would resume one day.

Neither theme was entirely accurate, but both were necessary.  We needed to aspire to more than just a return to normal, but to make normal better.  We do now, too.  In the meantime, we have to slog through some unpleasantness. And we have to just buck up and do it.

In the United States, we have the Thanksgiving holiday approaching next month, which, for those from other countries who may not be so familiar with it, is a huge holiday in this country because it so deeply reaffirms our cultural heritage. Also, most of us really like pumpkin pie.

Christmas, which is celebrated around the world, will come after that in a world now consumed by the COVID-19 virus.  We in our respective countries are being told to tone down our holiday family gatherings this year to keep each other safe.  So many of us are balking at that, but I would have to ask them, if a doctor gives them a diagnosis of cancer and tells them they must begin treatment with chemotherapy or radiation, or surgery, or a combination of all three, what will be their answer?  Will they say, "No, I won't!"  And run out of the office and on to their certain deaths?  Or will they master their fear and face down their dislike of unpleasantness and inconvenience for the good of themselves and their loved ones and begin treatment?

If you are given a diagnosis of cancer, only you have the disease.  If you are infected with COVID-19, everybody near you gets it, too.  Unless you have been tested, you may not know that you have it.

Back to Claudette, and Jennifer, and Shirley sitting together for comfort in the icy cold realization that their lives are not going to return to normal anytime soon...I'd like to add a personal note.  My father, who served overseas during World War II in the United States Army fighting the fascist enemies of democracy (that's what you do when you're Antifa), missed three Thanksgivings and four Christmases.  He had to; it was for the good of the nation and all civilization.  Some of his pals never got home to celebrate another Thanksgiving or Christmas ever again. So he didn't complain.

Neither should you.  Do your part.  Do your bit.  Wear the mask.  Stay home.  Keep calm and watch classic movies.

Jacqueline T. Lynch is the author of Ann Blyth: Actress. Singer. Star. and Memories in Our Time - Hollywood Mirrors and Mimics the Twentieth Century. Her newspaper column on classic films, Silver Screen, Golden Memories is syndicated nationally.  Her next book, a collection of posts from this blog - Hollywood Fights Fascism - is available here on Amazon.

No, kindred spirits don't need to explain much to each other. But I sure wish such a simple message resonated more with all the non-kindred spirits. We all share the same earth, even if a lot of us are trying our best not to share the same living rooms in the holiday season.

You nailed it. What a thought!