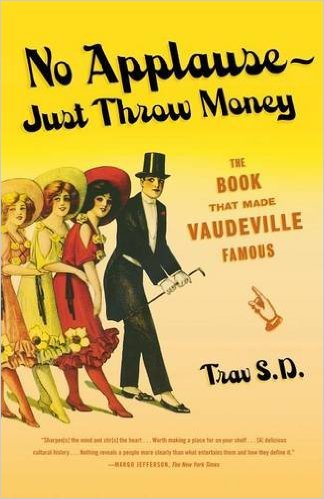 Vaudeville gave us many performers whose careers we've come to know from their eventual migration to Hollywood and the movies.  In turn, some movies managed to chronicle vaudeville performances and preserve them on film so we can enjoy them today.  It's a special relationship.

I've mentioned before on this blog the other points on the "star" that comprise the universe of the twentieth century actor: movies, of course, but also the stage, radio, and television.  The fifth point on the star is vaudeville.  I consider this separate from "the stage" because it was a unique world apart from full-length dramas, comedies, or musicals.

W.C. Fields, sure, and Mae West, and the Marx Brothers, but they essentially brought their vaudeville acts to the screen.  Mr. Grant, or we should say, Mr. Leach, morphed into something and someone altogether completely new.  The movies created many "personas" for many actors whose images, not to say talents, were a work in progress. Vaudeville was the training ground.

This post is just to point you in the direction of a swell book that is a terrific survey of vaudeville if you know little about it and want to know more:  No Applause - Just Throw Money, by Trav S. D.

A few years ago I reviewed his book on silent film comedy, Chain of Fools, here.  He also writes the blog Travalanche, a wealth of information on classic films and vaudeville.  He's one of my favorite writers.

As I've mentioned in this post a few weeks ago, I'm currently working on a book about a summer stock playhouse on Mt. Tom in Holyoke, Massachusetts.  Vaudeville played an important part in the early days of this theater, and Trav's book has been a most enjoyable part of my research.

His knowledge on this art form and era is impressive, and you will be hard pressed to find a guide to this fascinating world more articulate and funny.  It really is a very enjoyable book, and I recommend it to anybody interested not only in vaudeville, but in classic films.  Exploring the history of vaudeville will enhance your appreciation of classic films.
*****************
Next week we continue our series on the current state of the classic film fan with a discussion with Patricia Nolan Hall, aka Caftan Woman.
*******************

Posted by Jacqueline T. Lynch at 7:03 AM

We're so lucky that fine and committed writers can lead us into these other worlds.

My knowledge of vaudeville is sorely lacking. I'm looking forward to learning more from Trav S.D. (I'm also keen to learn more about his name!)

Thanks for the recommendation. :)

Hi Ruth, you'll find a wealth of information, and most entertainingly written, at his blog as well as in the book. It's great history.