Lessons in the Dark by John Greco 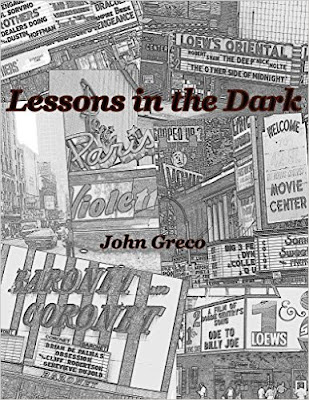 Lessons in the Dark by John Greco is a thoughtful, contemplative collection of short essays on film.  Classic films are the focus, but two interesting devices are used to make the old favorites sharp and relevant to today’s social ills: first, using simple themes of War, Discrimination, Social Injustice, and the Media (the unit heading alone deliciously inferring that the media is, or can be, another social ill).  Second, comparing a classic film to a newer or modern film of the same subject.  I would suggest that comparing a classic film to a similar modern film may probably be a better way to introduce younger people, who are not classic film fans, to old movies.  It becomes not so much a contest as to which is better, but rather it serves as a bridge to understanding.

This is part six in our year-long monthly series on the current state of the classic film fan.

Author John Greco is known to many of us classic film bloggers for his excellent blog, Twenty-Four Frames. Here are a few of his interesting observations:

On I Was a Fugitive From a Chain Gang:

“An interesting point is the modernity of James Allen’s thinking after getting out of the Army. His mother and Reverend Brother want him to go back to his factory job, however, James doesn’t want to be tied down to a boring job he has no interest in. His brother calls him ungrateful for not accepting his former bosses offer to get his job back, but James wants something more exciting and wants to find himself. His mother actually uses these words after she comes around to his way of thinking. Finding oneself is such a modern notion, I was somewhat surprised to hear it spoken in a 1932 film.”


“Ironically, over the years, people and even countries from both sides of the political spectrum have come to find their own personal values in this film. The former Soviet Union accused the film of being “a glorification of the individual.” Pro-McCarthyites saw the film as communist propaganda and anti-American. Yet, President Ronald Reagan loved the film for its lead character’s “strong sense of and dedication to duty and law.” Both Presidents Eisenhower and Clinton loved the movie. Clinton ran the film no less than 17 times while in office! He even recommended it to then incoming President Bush. So the question becomes, how can one film be interpreted and be satisfying to both sides of the political fence?”


John discusses the Pre-Codes, the Depression, M*A*S*H, and Lenny, and ties them together.  There’s Invasion of the Body Snatchers, and Black Legion.  (My thanks to John for referring to my book on Ann Blyth in his essay on Brute Force, which is part of his Films of Social Injustice chapter.)  I was especially taken with his filmography of Orangey, a cat who most of us know from Breakfast at Tiffany’s, playing “Cat,” but who actually had a few other films under his belt.  Er, collar.


John and I discussed the notion that we are on the threshold of a new era of film criticism in classic film:


JTL:  I wondered, first, what you think about the idea that film criticism and film history are now in the hands of so-called (and I use this possibly disparaging word intentionally) amateurs -- because of blogs and the rise of self-publishing?  There was a time, and may still be among professional critics and academics, that film, theatre, drama critique was a rarified world.  It has now become gloriously egalitarian.  But there are pitfalls to that as well as a huge boon to compiling the chronicle of our pop culture.  What are your thoughts on that?


JG: I think it’s been both liberating and problematic. Self-publishing has opened up doors for many writers. Overall, I think it's a great opportunity for writers to get their work out there. If they go that route they should be professional and responsible for and with their work. Of course, like in so many other endeavors there is the good and the bad. Film history like all history can be distorted if not reported correctly. As you know yourself, being an historian, writing about film history like any subject requires a lot of research, and fact checking that research to see how accurate it is. You see a lot of misinformation out there. You got to do the investigative work. I’ve seen it even in books. You read one book and it states one fact. Another book says something completely different on that same subject. How do you incorporate this sometimes contradicting information into your own work?  For me, when I am writing an article with historical background I want to make sure I get the facts correct and check as many resources as possible. I hope all writers do this.

Film criticism today runs rampant. You’ve heard the term everyone’s a critic and today that’s true more than ever before. Film criticism came into its own in the 1960’s with people like Pauline Kael, Andrew Sarris and others. They took film seriously as an art form. They analyzed it and told you why it was a good film or not. Film criticism became legit, on the same level, with other arts. Today with the internet, the “everyone’s a critic” thing has become a reality and most of the time it’s things like “this film sucks” or “it’s awesome!” Maybe not in those words but what is said is no deeper than that. You see it all the time on IMDB or Letterboxd. To be a serious film critic or film historian one must have a good knowledge of the subject. One should read and study the reviews of critics like Kael, Ebert, Sarris and others. You can learn what to look for just by reading their work. Studying the technical aspects of filmmaking is important: editing, photography, lighting, etc. Film historians do their research, film critics need to do the same. You can’t just write about what you like saying how awesome it is. There’s got to be more.


JTL:  I was very intrigued with your taking a handful of topics - war, racism, etc., that are timeless and can be used on an equal footing to compare classic films with newer films.  It's a great template and I think could be used to introduce younger people to classic films more successfully than just saying, "Here's an old movie I love.  You should watch it too."  By comparing older and newer films on the same subject, you've hit upon a very useful model.  I'd love to hear more about your views on that.  You have one foot in the world of the newer or modern films, and I do not, so that is a great advantage and I admire that.


JG:  Thank you. When I first began to think about this book it was going in a completely different direction. Then, like I mention in my introduction, a few years back, I was writing a column for a now defunct pop culture on-line magazine. One of the publishers saw my blog, liked it, and asked if I would be interested in writing a column on classic films. His only caveat was I had to relate the films I wrote about to our world today in hopes of connecting with its target audience, today's youth market.  After thinking about I realized how life repeats itself and there were plenty of old films where we can learn modern day lessons. One of the first films I wrote about was Ace in the Hole. At the time, there were a couple of scandals going on about news reporters falsifying or creating stories presented as facts. It was perfect. The more I looked into this the more I found how so many classic films still talk to us today. You just have to listen. The absurdity of war is brought to the front in both Duck Soup and M*A*S*H.  More recently, a powerful film like “Spotlight” shows you investigative journalism at its best. Just like it did in All the President’s Men. These two films can be compared to more devious newspaper films like Blessed Event and Five Star Final which shows journalism in a much darker light. All art is timeless. People just have to be open to it. I recently watched Brian DePalma's Casualties of War and came away from it seeing it as not just another war film about Vietnam, but as a morality tale and the cost of war on the human spirit. Every soldier comes home from war damaged.  It's a price we are still paying for today.


John Greco’s Lessons in the Dark is available in eBook from Amazon.  My thanks to John for allowing me to review his book here in exchange for a reviewer’s copy.  You can read his blog Twenty-Four Frames here.

********
Part 1 of the year-long series on the current state of the classic film buff is here: A Classic Film Manifesto.

Part 3 is here: An interview with Kay Noske of Movie Star Makeover.

Part 4 is here: Evolution of the Classic Film Fan.

Part 5 is here: Gathering of the Clan at Classic Film Festivals.

Posted by Jacqueline T. Lynch at 6:21 AM

Thanks so much, Jacqueline for making my book and me part of this series.

You're welcome, John. I enjoyed your book, and I know our readers will too.

Very interesting interview. I felt like I was sitting in on a conversation with two fascinating people.

The fact checking point is so important. I have noted on television news programs when they are mentioning anything from an older era (as in the obituary of a notable), they turn to their "experts" who are woefully lacking in any knowledge of the subject. Most disheartening to an "amateur" who endeavours to be factual instead of fanciful.

"Most disheartening to an "amateur" who endeavours to be factual instead of fanciful." Agreed, CW. Thanks for the kind words. It's easy to interview a guy like John who is articulate and knowledgeable.

I think John has the right idea, to introduce people to the classics by choosing timely films to which modern audiences can easily relate, e.g. Ace in the Hole.

Thanks for commenting, Ruth. I agree, John's got an interesting angle that is probably the best approach for many newcomers.