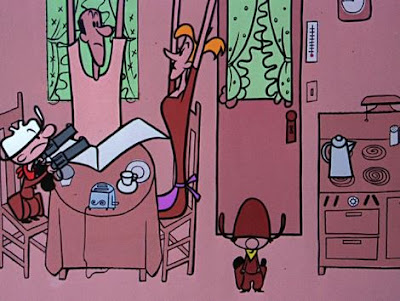 “Willie the Kid” (1952) is a masterpiece, and one of my favorite cartoons.  It’s a kind of brilliant animated haiku, a snapshot of childhood and suburbia and the 1950s, so well-caught in the UPA studio style of limited animation.


It tells the story of some little kids who playact a typical Western scenario they might have seen on any number of B-movie or TV oaters.  The wonderful thing is that this Western story is superimposed on a suburban neighborhood.  We meet Willie, the cowboy hero, as he sits down to breakfast.  His father reads the newspaper, his mother nags his father to cut the lawn, and the neighbor boy Roger stops by.  I love how the mother knows it’s Roger before she opens the door.  Roger must come over every day at this time.


When Willie and Roger leave the house to play outside, outside become the wild West.  Dogs are their horses.  Roger becomes the affable but less intelligent sidekick. 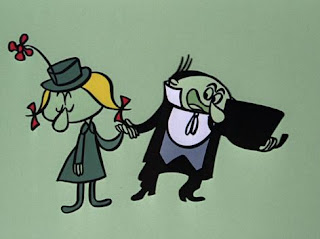 We have our villain, and we have our ingénue who must be saved from him, but Lillybelle has more moxie than a lot of B-move gals.  She insists on continuing her murdered father’s stagecoach line (a child’s toy wagon pulled by a dog), shouting with gusto, “Someday my stage line will be looked upon as an important contribution to the West!” 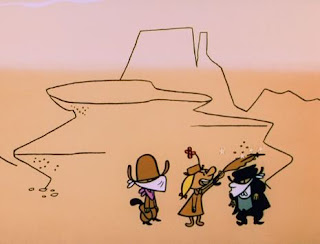 Later when the villain accosts her, she beats him repeatedly with her parasol, theatrically wailing, “Oh, if I were only a man!” 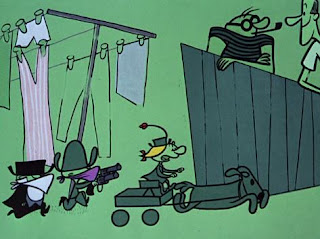 The houses and backyard fences morph into rocks and buttes, but occasionally, reality breaks in on even the most intense imagination, and we see Willie’s dad talking over the fence with a neighbor.  In a minute, Dad becomes a cactus when the kids’ power of concentration returns. 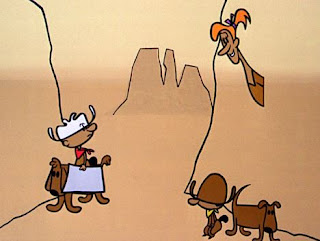 At one point, Willie is having trouble reading the map to the bad guys’ secret hiding place, and he hollers for Mama, who pokes her head out of the side of the canyon.  It’s really the kitchen window.


The kids and the grownups tolerate each other, but their worlds rarely collide.  For the most part they ignore each other, and I wonder if that, in 1952, isn’t the most prescient observation on the future relationship between the Baby Boomers and their folks in a couple of decades to come. 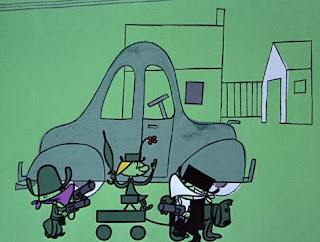 The voices are done by Marvin Miller, Marian Richman, and Martha Wentworth, all old hands at radio and B-movies.  Robert Cannon directed.  One of the animators was Bill Melendez, who later went on to a successful partnership with Snoopy.


“Willie the Kid” can be seen in “The Jolly FrolicsCollection” on DVD here from TCM.  This is a fabulous collection of cartoons from the intelligent, stylistic and very arty UPA studio.  Mister Magoo, you may recall, came out of this studio, and so did Gerald McBoing Boing, who I love so much because he breaks my heart.  The original Madeline cartoon is also part of the collection.

Posted by Jacqueline T. Lynch at 8:05 AM

Just love your blog. By the way, I was 6 in 1952, just about the same age as Willie the Kid.
Regards
Willie (wish I was still a Kid) Senekal

Thank you, Willie. I hope you were less trouble to your parents.

"Willie the Kid" sounds like a real treat. Reminds me of a little girl I know who used to kneel behind the hassock and shoot her finger pistol and those baddies who would dare to injure Hoppy or Roy.

Sometimes I think parents of today are too much in their kids' lives. There should be a time when grown-ups just keep to their own kind. What do they know anyway?

CW, you'd love "Willie". I agree there is quite a bit of micro-managing of kids these days. I suppose that's what makes the mom and dad "cameo" appearances in the kids' imaginary world so refreshing and funny.

I hope your aim from behind the hassock was good.

I never miss. Hey! How did you know it was me?

Um, you forgot to take off your red cowgirl hat.

I have never seen this, but think I would love it.

I'm sure you would, Ryan.

Hi, I wonder what Archie says just after "marry me", I can't understand that line and I'm working on subtitles for the whole block of short films, so it would be great if you could help, seeing you're a fan. Thanks, Martina

Welcome, Martina. The line Archie says is: "Marry me, instead. A banker needs a pretty wife."

Actually, instead of "pretty", he uses the slang word "purty", and kind of drawls it out.

I hope this helps. Thanks for stopping by, and good luck with your project.

Oh, a banker needs a pretty wife! Thanks a lot, Jacqueline! You don't get dialogues for these old shorts and sometimes it's kind of hard to catch everything, so yes, you've been a great help! M.