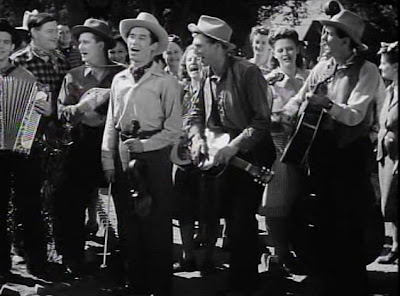 “Cowboy Canteen” (1944) is Columbia’s answer to the Warner’s Bros. wartime all-star revues “Hollywood Canteen” and “Stage Door Canteen”. We can have a look at the latter two at another time, as “Cowboy Canteen” really doesn’t compare much. 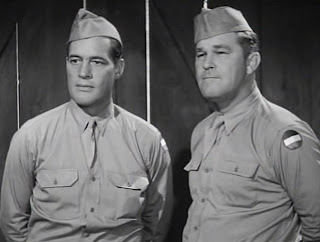 It’s a short, fun look at cowboy swing in an era when it was just beginning to take off in popular music, but the plot of this movie is paper thin. Charles Starrett, who played in about a zillion B-movies, mostly Westerns, and mostly as guys named “Steve”, is the boss of a ranch. However, he and his sidekick played by Guinn “Big Boy” Williams are off to give Hitler what-for, so they need people to step in and run the ranch for them while they’re in the Army. 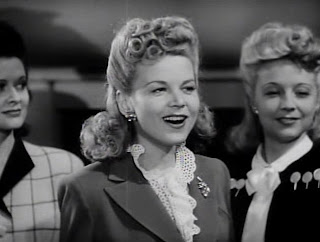 A troupe of entertainers takes up the job, including Jane Frazee, Max Terhune as the ventriloquist of the bunch, and Vera Vague (in real life, Barbara Jo Allen), the stock man-chasing comedienne. Look for Dub Taylor as “Cannonball”, a comedy relief character he also played in a zillion B-movies. 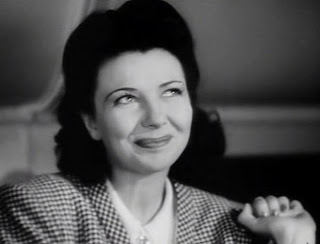 Starrett and “Big Boy” are assigned by the C.O. to organize a camp show, so there we are. One funny bit, so brief you miss it if you blink, is when Vera, struggling with her purse and a heavy suitcase, hands a big galoot her luggage. He grabs her purse instead, tucking it under his arm and walking away. 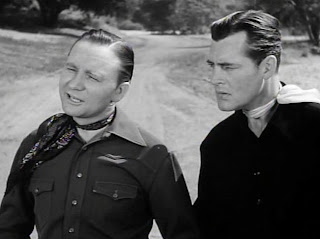 What makes this B-movie fun are a few of the featured acts, including the great Tex Ritter, he of the mournful ballads of A-Westerns, like “High Noon” (1951) and “Trooper Hook” (1957), reviewed here. 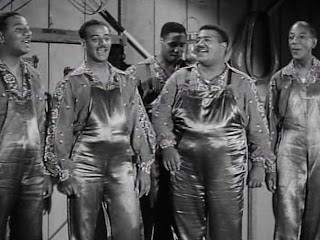 The Mills Brothers make an appearance, but they seem a little too polished and classy for this crowd, with “Up a Lazy River” and “Paper Doll”, which were huge hits for them. 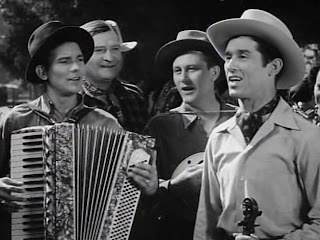 I really get a kick out of Roy Acuff, “The King of Country Music”, performing “Wait for the Light to Shine” and “Night Train to Memphis”. The Smoky Mountain Boys and Girls accompany him. Their sound is special, completely genuine, raw and spirited music, free of any Hollywood gloss. Their rollicking hillbilly hymn is a joyous reminder that war or no war, people were still having fun somewhere.
Posted by Jacqueline T. Lynch at 7:36 AM

This sounds like a lot of fun. I think this has run on TCM in the past. I'll definitely have to check it out.

A few years ago Dennis Quaid was going to make a film about Spade Cooley. I'm sorry it was never made as it would have introduced his music to a whole generation. I like your description in the last paragraph about the unique sound of this music. Well done.

Thanks, Kevin. I think I liked Roy Acuff's turn at bat the best. Just goes to show, even in the schlockiest movie, you can still find a diamond in the rough.

Jacqueline,
I haven't seen this, but I know all the songs you listed--to much time in VFWs! LOL! I don't know about those outfits the Mills Bros. are wearing--prelude to disco?

This really sounds fun. I recorded it a ways back (maybe last summer?) -- it's currently on loan to my dad but I'll catch up with it one of these days! Love the Mills Bros. so it will be fun to see them.

Kim, your VFW comment cracked me up. As for those disco satin-y overalls the Mills Brothers are wearing, all I can say is I hope they were paid well.

Laura, the acts in these kind of wartime revues are always fun. But even in the "Stage Door" and "Hollywood" versions put out by Warner Bros, the plots all seem tedious to me. I just wish they'd performed without needing to string along a story line. "Thank Your Lucky Stars" is another one. Great acts, with some fun parodies by the stars, but the story centers on Eddie Cantor. Too much Banjo Eyes for my money. Give Errol another song.

I'll keep an eye out for this one - it sounds like a different strain of homefront entertainment than I've seen. You have a good eye, Jacqueline, for obscure but interesting movies that I'd otherwise miss entirely.

Thank you, Lady Eve, but I think "a good eye for obscure but interesting movies" is sometimes just another way of saying I have no discernable taste.