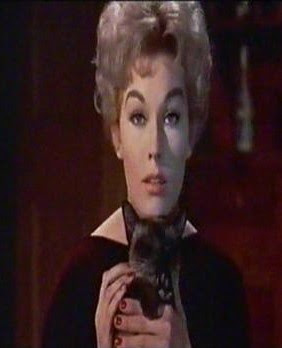 Bell, Book and Candle (1958) begins its story on Christmas Eve, carries the plot a few months into the spring, and never really mentions Halloween, but since the story is about a witch, Halloween is never far from our minds.

Kim Novak plays the anthropology major-turned-dealer in native art who lives behind her shop in Greenwich Village. She is the witch, and James Stewart is the publisher she bewitches. Elsa Lanchester, as always, is hysterical as her mischievous and somewhat childlike aunt, also a witch. Jack Lemmon is her mischievous and somewhat sophomoric brother, a warlock. They gather occasionally at a seedy local nightclub to enjoy the company of other witches who are all living a kind of underground life, on the fringes of respectable society, never daring expose who they really are. 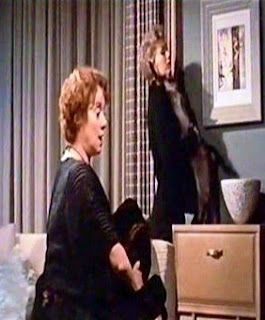 Another important supporting role goes to Pyewacket, Miss Novak’s cat. Particularly charming is the bond the two seem to have had. She looks quite comfortable handling him. He sprawls and hangs like a limp towel on her shoulder (mentioned in this previous post on other cat actors), and the way he stretches himself against her body, he certainly seems comfortable with her.

Kim Novak may have taken him for a model for her role, with her slow, feline, graceful, deliberate movements, her penetrating gaze, her casual, low, lazy speech. She does not appear emotionally brittle as she does in her previous films mentioned here, Picnic and Strangers When We Meet, or Vertigo, in which she also started with James Stewart. Here, though her character is complicated and mysterious, she comes off as a much stronger, focused person. 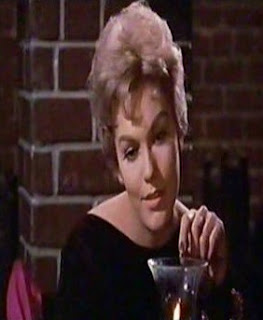 On Christmas Eve at the local witch dive, she confesses her Christmas depression (which might make her more human after all) and ruminates, “Don’t you ever wish we weren’t what we are -- that you could spend Christmas Eve in a little church listening to carols instead of bongo drums?” 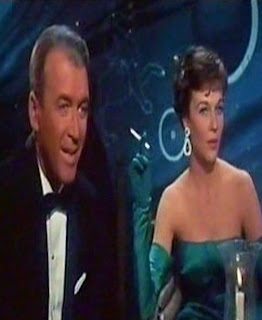 She takes a fancy to upstairs neighbor James Stewart, and when she discovers that his fiancée is her old college nemesis, played razor sharp and elegant by Janice Rule, the kind of girl who led the clique and ostracized the losers, Miss Novak decides all’s fair in love and war. She goes after him. 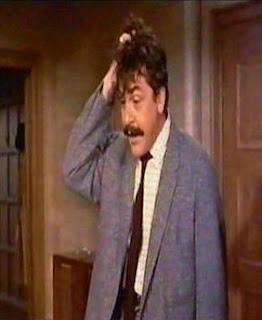 As part of her plan, she casts a spell on an author that publisher Stewart wants to meet. That author, a charlatan investigating witchcraft, is played by the one-of-a-kind Ernie Kovacs, with his customary dizzy alcoholic logic. She casts a spell on Stewart, and one of the most memorable scenes is their Christmas morning adventure on the top of New York’s Flatiron Building. When he tosses his hat off the roof of the building, we watch is sublimely sail several stories until it slaps into the slush on Fifth Avenue. 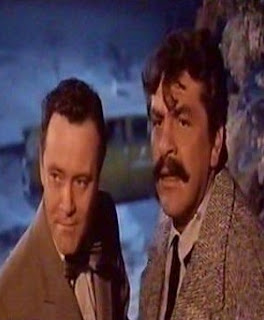 Complications ensue when her brother Jack Lemmon decides he’s tired of being poor and starts to feed real information on witchcraft to Ernie Kovacs to cash in on his book that Stewart will publish. Novak nixes this project as too dangerous to their community, and Lemmon gets his revenge when Novak is forced to confess to Stewart that she is a witch and that she had cast a spell on him. 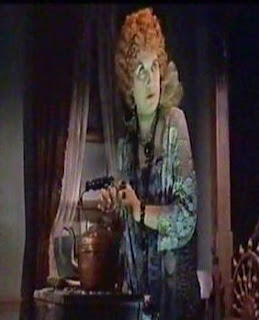 It takes a little convincing, but eventually the light dawns and Jimmy is horrified, angry, and humiliated (his reactions are very funny). He seeks a counter spell from another local witch, played with glorious self importance by Hermione Gingold.

But we have our happy ending when Kim Novak, in spite of herself, really has fallen in love and as a result, blushes, cries, and loses her powers. And her cat. Stewart decides he really is in love too, without the spell.

Taken from John van Druten’s stage play, much of the playful language teases us with the bewitching power of sex. Novak scolds Elsa Lanchester for the pranks she plays and forbids her to use her witchcraft because she cannot be “discreet.” 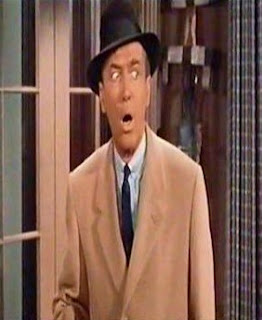 Jack Lemmon, she tells Stewart, uses his powers to enhance his love life. Elsa Lanchester tells Stewart that witches cannot fall in love, “Love is quite impossible. Not hot blood, though. Hot blood is quite allowed, but of course,” she lowers her eyes, “you know all about that.” 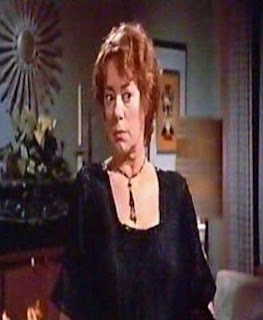 There are other playful remarks that gesture to the history of witchcraft (or rather, suspicion of witchcraft) in America. Elsa Lanchester confides to Stewart that both Novak and Lemmon were witch prodigies as children, “We lived in Massachusetts.”

And, when Stewart, seeing that she has a confession to make and teasing her to just come out with it says, “Have you been engaging in un-American activities or something?”

Obviously, this film was a huge inspiration for the successful television sitcom Bewitched which followed in the 1960s and early ‘70s. (Speaking of which, have a look here at this post on the Samantha statue in Salem, Mass. on my New England Travels blog.)

It’s interesting how many words we have to denote love that come from a mystical lexicon: bewitching, enchantment, magical, casting spells. Perhaps Stewart is right when he says, embracing Novak at last, “Who’s to say what magic is?”


Jacqueline T. Lynch is the author of Ann Blyth: Actress. Singer. Star. and Memories in Our Time - Hollywood Mirrors and Mimics the Twentieth Century. Her newspaper column on classic films, Silver Screen, Golden Memories is syndicated nationally.
Posted by Jacqueline T. Lynch at 7:31 AM

Great review! This is one of my favorite guilty pleasures- for some reason I always look forward to watching it around Thanksgiving, it gets me in a holiday mood :) (I know it has nothing to do with Thanksgiving, but I'm odd I guess! lol)

And I really want to name a cat Pyewacket.

Thanks, Kate. I agree, it's a fun movie. I wonder how many cats are actually named Pyewacket because of this movie?

Awesome. I love Novak and for some reason have never gotten around to watching this film. Looks great!

Thanks, Meredith. I hope you get a chance to see the movie soon.

For years I knew someone who had a cat named Pyewacket, and I never knew why. Always thought it was the strangest name. Until I saw this movie and it made sense.

Hi, Tom. Aha! So, there was more than one Pyewacket. I wonder how many dogs out there are named Lassie?

We are told that witches cannot blush, or cry, or fall in love, and that if they ever did fall in love, they would lose their powers.

When Archie Comics introduced the "Sabrina, the Teenage Witch" character in 1962, she was sort of impish and amoral, a far cry from the Melissa Joan Hart TV version many years later. In the first story, Sabrina explains she cannot cry or fall in love (because she'd lose her magic). I'm guessing writer George Gladir was probably influenced by this movie.

Archie Comics, whoa, that's taking me back. I didn't realize Sabrina had the same problem about human emotions and losing her magic. You're probably right, the writer might have plucked that from "Bell, Book, and Candle."