Young at Heart at the beach 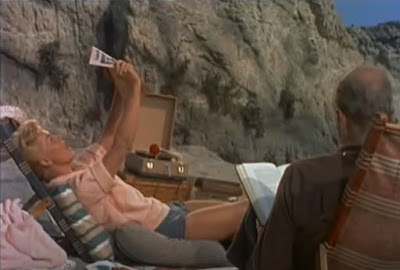 Young at Heart (1954) gives us a glimpse of an idyllic beach scene on the Connecticut shore in the 1950s.  To be sure, it is mostly of Hollywood origin, or at least, California, but if the beach is not in the right location, the warm and lovely nostalgia of the beach is genuine. 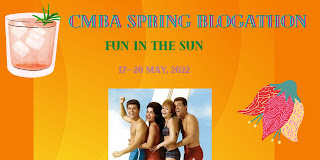 This is my entry to the Fun in the Sun Blogathon, hosted by the Classic Movie Blog Association.  Have a look at some great posts on this topic here. 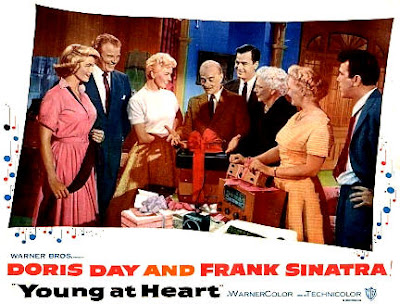 The movie Young at Heart is a remake of Four Daughters (1938), which we covered previously in this post.  In that original story, widowed Claude Rains heads a family of four girls, played by the Lane sisters plus Gail Page, and all are musicians.  May Robson plays the auntie matriarch who lives with them.  The girls’ suitors have picked out their choices among the daughters, but all the young beaus have competition with the newcomer: handsome and happy-go-lucky Jeffrey Lynn.  But an even newer newcomer, a dour, sarcastic and self-pitying John Garfield swoops in to really disrupt things and his love for Priscilla Lane nearly tears the family apart.

We see the beginnings of the rift and a change from a lighthearted first part of the movie to a more serious and even tragic second part at a family picnic in a secluded country glen.  Here we see the sisters are really all interested in the same man. 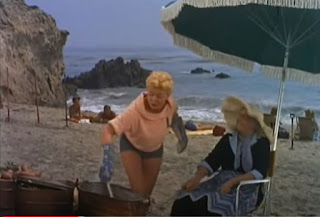 In Young at Heart, this scene is transported to the beach.  Robert Keith plays the Claude Rains role of the dad, Ethel Barrymore in a charming mixture of regal and down to earth plays the May Robson role.  Here the sisters number only three instead of four: Elisabeth Fraser, Dorothy Malone, and Doris Day.  Doris plays the lead Priscilla Lane role.  The boyfriends are with the family at the beach, and the heartthrob who will cause unspoken jealousy among the sisters is played by Gig Young in the Jeffrey Lynn role.

Frank Sinatra plays the John Garfield role in this movie, but this scene is just before he makes his first entrance in the film, so we don’t know yet how he’s going to upend the family.  Even without him, the seeds of discontent are already sown, making the day at the beach bittersweet. 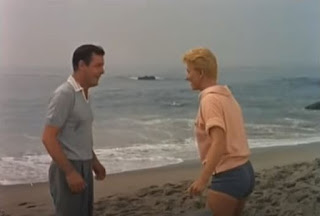 With an almost nuclear-powered sunny disposition, Doris Day is the most lighthearted of the group and fails to see her sisters’ yearning for the man she playfully cavorts with in the surf.  Doris gets to sing two songs during this nearly 10-minute beach sequence.

For those of us who live close enough to a coast to have spent pleasant days on the beach, the movie image of sand and sea, of wave-kissed rocks and sunshine reflecting off the constantly moving ocean is familiar and almost personal, like someone with a movie camera somehow entering our brains and capturing a memory.  Some sensations experienced going to the beach are really timeless and there is a distinct and powerful comfort about that. 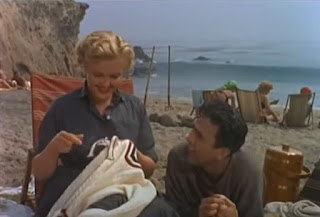 But we may sense that some aspects of this scene are not timeless, and that perhaps going to the beach in the 1950s was a little more do-it-yourself, simple, and perhaps with a slower pace of life.   Yes and no.  We don’t see any arcades or water parks or concessions, or even bathhouses with facilities on this beach, but there were beaches back then and even before – though not all – with plenty of tourist amenities.

That this beach is not crowded and there is plenty of space between the actors and the extras in the background should not be taken that beaches were not crowded in the 1950s.  Of course, they were.  But not all were, and even in these modern times, I have been to New England beaches that were just as unspoiled and unpopulated as this one in the movie seems to be.

So that is not quite it, either.  There must be something else that evokes the strong feeling of nostalgia for a 1950s beach in this film.  Is it because there are no loud radios playing?  Maybe, but we see Doris singing along to a portable record player.  We don’t see too many record players at the beach these days.

Is it because nobody’s in a bathing suit and they come lounging on the sand in their clothes?  Maybe.  No sunscreen?  Maybe. 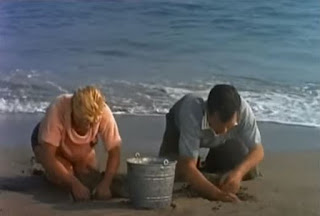 It could just be that the clam digging and the large pots with New England clambake accoutrements – corn on the cob, potatoes, etc., are not seen quite as much now as in the old days, or campfires on the beach, or gathering driftwood to fuel the fires.

There is a noticeable lack of people taking selfies or scarfing packaged junk food snacks.  No one is being divebombed by seagulls for a few Cheetos. 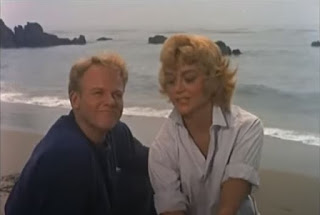 I get a kick out of Alan Hale, Jr., who plays the suitor of Dorothy Malone, talking about his sudden idea of what a great thing it would be “buying this strip of beach, tearing down all the bungalows on the highway and putting up some hotels, a whole string of them.”

She responds, “Whoever heard of a string of hotels along the beach in Connecticut?”

There are some hotels here and there on the Connecticut coast, and were, too, in the 1950s, but not enough perhaps to make Alan Hale, Jr.’s dream come true.  Instead of hotels today there are more likely to be a few condominiums, but the geography doesn’t always allow for development.  Working harbors, saltwater marshes here there, and far more protected areas than there used to be.  Thank heaven. 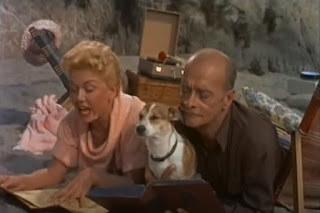 I think what I really like about this beach sequence is the work of the sound technicians.  Behind all the dialogue, behind Doris’s songs and the “orchestration” that seems to bloom from her portable record player, is the omnipresent, lazy, rhythmic sound of the waves rushing to the shore.  The seacoast is not a quiet place.  The sound of the surf is eternal. 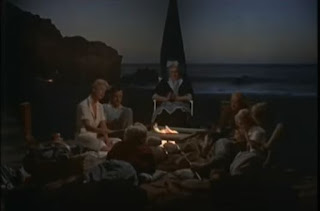 The bright, almost blinding daylight of the first part of the sequence becomes a peaceful twilight with the family around the campfire, and Doris still singing, toasting marshmallows.  The large beach umbrella that sheltered Ethel Barrymore earlier in the day has been folded up.  You can almost feel the refreshing cooler breeze off the ocean, almost feel chilled by it.  It is an idyllic ending to the sequence, a calm before the storm.  A day at the beach is a respite, time to enjoy, to reflect, and to make a memory that will last through days to come.  A beach memory may mark epochs in our lives, just as it does in the movie.

Visit the CMBA website here for more Fun in the Sun Blogathon.

Posted by Jacqueline T. Lynch at 7:49 AM

What a charming post. I simply adore Doris Day and she is just like a sunny day at the beach, isn't she? I haven't seen this film and probably the reason is be cause I naturally veer away from Frank Sinatra. But that's crazy, right? I need to get over that little hiccup because I'm sure the film is a delight.

Thanks so much. The film has many delightful moments, and the cast makes it so. I get a kick out of Ethel Barrymore's enjoying watching boxing on television. Overall, I would say the original FOUR DAUGHTERS is really a better film, but this one is very pleasant, too. If you're not crazy about Frank Sinatra, his character in this movie probably won't improve your opinion; he's a bit of a downer.

I'm such a big Doris Day fan, but when I think about it, I've seen so few of her films! Your post makes me want to see this one. It sounds delightful, and added to the fact that I also enjoyed Four Daughters, I'm really looking forward to checking this one out!

I hope you get to see it soon, Karen. Doris has center stage in this one in a very likeable role. Great supporting cast as well.

I identify with your post as many wonderful memories are tied to my days on the beach. Your analysis of this scene was most enjoyable. It is interesting that the whole family is there in regular clothing, not bathing suits...great observation. I will be on the lookout for this movie.

An absolutely lovely post, Jacqueline. So evocative of bygone days at the beach. Coincidentally, because we're having summer weather in Northern California right now, I'd already been daydreaming earlier today of idyllic summer days at the beaches where I grew up in Southern California. Your piece, so beautifully written, really stirred up those memories and, with them, nostalgia.

Oddly, since I've seen Young at Heart more than once, I couldn't recall that beach scene. Not at all. So, time for a revisit, and I'll be keeping your post in mind as I watch.

It seems we have a few beachgoers among the commenters. Thank you, Classic Movie Muse, and I hope you get to see the movie soon.

Patty, thank you for your kind words. I know, the lure of the ocean tugs at our memories. Due to family and other circumstances, I have not been in some time, and I miss it. Sometimes, I confess, I explore various "beach cams" on the Internet to get my fix. Too bad there is no sound, so I do not get to hear the waves nor smell the salt air, nor taste it on my lips. I do, however, run across the odd seagull in a shopping center parking lot now and again. They do not divebomb me for Cheetos. Which is good, I guess.