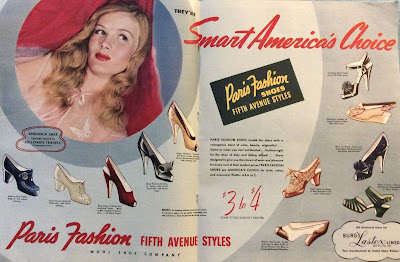 This ad from Screen Guide, March 1942, is a typical marvel of Hollywood merchandizing.  A photo of Veronica Lake is pasted in the corner of a two-page spread ad for shoes.  The caption indicates she can currently be seen in the movie Sullivan's Travels (which we covered here).

The shoes have nothing to do with the movie, and neither Veronica Lake nor the movie have anything to do with the shoe company or its products.  But there is an unabashed eye candy element to both.  The stars were used in print ads to sell everything from toothpaste to chocolates, and keeping their names and faces in front of the public as often as possible was good for the studios.

I would doubt any modern celebrity's image could inspire as much brand loyalty as these deft and casual appearances stars made plopped into the corner of a 1940s movie magazine ad.

Posted by Jacqueline T. Lynch at 9:33 AM

I do not know how that tiny woman could walk in some of those heels!

Maybe after working with Alan Ladd a few times she got enough practice. Personally, I'd rather just stand on a box. Two boxes, if I was working with Joel McCrea.