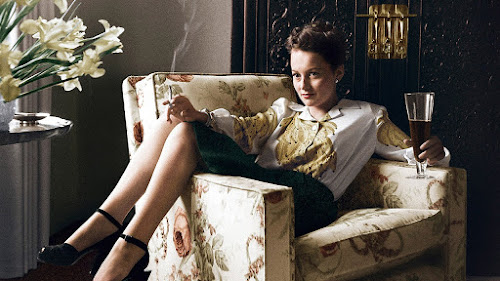 The incomparable Olivia de Havilland has exited this world after celebrating her 104th birthday, leaving us breathless, as usual, with the sum total of her talent, her elegance, her grace, and an unusual quality of self-knowing. Among her films we've discussed here are The Heiress (1949), for which she won one of her two Oscars and was made in the period where she did her strongest work; The Strawberry Blonde (1941), one of her last pretty young ingenue roles before her court fight with Warner Bros. resulting in her win and "the de Havilland decision"; and A Midsummer Night's Dream (1935), a lovely example of her early work, so mature, which brought her to Hollywood as a teenager.
Of all the greats we've lost this year, her career stretches farthest back to the Golden Age of Hollywood. Sometimes interviewers ask stars if they watch their old movies, but I wonder if someone like Olivia de Havilland, who had retired happily to France many years ago, only dabbling in TV in the final years of her career, watched any classic films at all -- and especially, did she enjoy recalling former colleagues in the industry.  For someone who has lived more than a century, one outlives almost all relationships.  Someone in the entertainment business has many more people passing through their lives than most of us do in our occupations.  We may number our working acquaintances in the tens; someone like Olivia must have known hundreds.  Did she ever watch a film and smile at being reminded of someone she knew?
For all her class and elegance, I like to think of her humor and this clip from Thank Your Lucky Stars (1943) doing a jitterbug parody with Ida Lupino, and George Tobias, who despite being a character player (usually of simpletons), gets the starring role of squiring the two hepcats.
Posted by Jacqueline T. Lynch at 11:36 AM

That's a fabulous clip. Such fun.

I imagine the memories would often crowd in upon the present and that she was a woman who saw both the past and the present with clear eyes and humour.

I think you're right, well said.