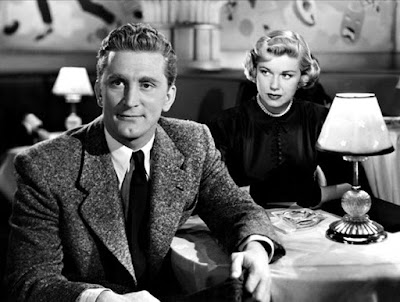 It is rare these days for the world of the classic film fan to intersect with news of modern pop culture, for our heroes were of the past, in a studio system long gone and by most, forgotten. When we mourn the passing of a figure from Hollywood's heyday, as happens more frequently as the years pass, non-classic film buffs may say, "Who?" and wonder cynically at our bereavement.

The passing of Kirk Douglas yesterday gives occasion to remember a great actor known not just to a nostalgic and narrow old movie fandom but also a man who by his long career and longer life is still identifiable as a celebrity, which is certainly unusual.

He was 103 years old when he passed, and remained in the public eye long after his last TV role some twelve years ago.  We old movie buffs know he began his career in 1947, supporting Barbara Stanwick, no less, in The Strange Love of Martha Ivers.  He was soon cast as leads, and he never looked back. His career stretched from film noir of studio system days to big budget blockbusters in the fifties and sixties, to eventual character parts and comedy cameos. He wrote his memoirs. He was a humanitarian. But just remaining in the public eye for so long and allowing us to see him age, rather than retreat into private life, is a testament to his vigor and his sociability, despite serious health events over the years. He was joined in the business by his famous actor son, but never replaced by him.  It was good to witness in a society that tends to marginalize the aged.

Posted by Jacqueline T. Lynch at 6:13 AM

The passage of time, the wonder of memory, and the legacy of art all wrapped up in one human being.

Indeed. We've had -- and have -- classic film actors and actresses who have lived to 100 years old and beyond, but few of those names are as easily recognized in the modern media-saturated world as Kirk Douglas. I would place people like Olivia de Haviland far above Douglas in stature as an artist and as having a career that stretched farther back than Kirk's -- but I think only classic film fans would understand her importance and remember her with love in a way that most others, including the modern media, wouldn't.