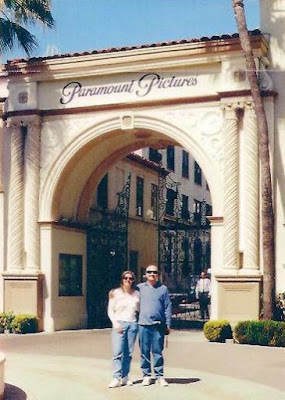 That's my twin brother John and I at the famous Paramount studio gate in Hollywood.  It was 2006, and as you may surmise, we were not "discovered" and given movie contracts.

Which, frankly, was a surprise to us, being so photogenic, and because that sort of thing happens all the time in the old movies.

However, the guard photobombing us behind the gate was powerless to keep us out.  It was two against one.

As I recall, we were taking a guided tour, along with a small group of tourists from Japan.  They were less impressed by Old Hollywood, but became more excited when we approached an outdoor "New York" street scene that they recognized from Seinfeld.

We all bring something different to the table.

This week marks the 10th anniversary of Another Old Movie Blog.  I hope it has been more than just another old movie blog.  It certainly has meant a great deal to me, and I marvel that the site has received over a million page views.  This, despite the copycat sites that still steal posts from it.  That readers continue  to manage to find their way here amazes me.

Thank you so much for the pleasure of your company.  I really appreciate it.
Posted by Jacqueline T. Lynch at 7:25 AM

You are definitely not just another old movie blog! Much more! Congratulations and look forward to another great ten years

Ten years! You should throw a party or something. Congrats.

Congrats on 10 years of classic movie blogging! I'll be celebrating mine in a few months.

John, thank so much. I really appreciate that.

Rich, if I were to have a party, I'd have to clean the place up. I don't know. Seems like a lot of work just for a piece of cake. Then again, I love cake.

Raquel, thank you so much. Where does the time go? Congrats to you on your upcoming 10th anniversary as well. Maybe we can have cake over at your blog.

Definitely looking forward to another ten years, Jacqueline. Congratulations on always, ALWAYS being the most erudite, the most proficient, the most movie loving blogger on the block. Not to mention a published author, playwright and history lover as well. Jeez.

CONGRATULATIONS, Jacqueline!! You have enriched my movie viewing immensely with your thoughtful takes on so many aspects of classic films. I look forward to each new post. Here's to many more years!

Yvette, you are too kind. Bless you. You forgot to mention my arthritic hands from typing so much. I'm shooting for Most Arthritic Blogger next year. I'm told I get to wear a sash.

Laura, thank you so much. Your blog was one of the very first I discovered when I discovered movie bloggers, and remains one of my top favorites. The photo in this post is on my office wall at home, and I often think back that on that particular trip, we also spent a day at Disneyland. I wonder if you were there that day? Wouldn't that be something?

Congratulations on your 10th Blogging Anniversary, Jacqueline! That is an impressive milestone.

Here's to many more years of your fabulous blog. :)

Felicitous congrats on your tenth blogiversary. It is a milestone to be celebrated, preferably with ice cream and cake. (Heavy on the cake.)

I was supposed to present you with a small token of our esteem at this time...however, the engraver spelled your last name as "Linch." (Suffice it to say, he has been dealt with in the appropriate manner.)

Congratulations on the 10th Anniversary of your wonderful blog!

Always interesting and beautifully written your blog is a little gem that informs and entertains this old Old Movie Fan.

Thanks for all your work over the last 10 years

Congratulations on your wonderful accomplishment. I don't remember when I started reading Another Old Movie Blog. It feels like yesterday and it feels like forever. I love how you always give me something to think about. I love the kick I get out of your writing. Also, I love that picture of you and John.

Thank you, Ivan. Since I have always regarded myself as something of a linchpin in my family, the engraver's mistake was not entirely inappropriate. (The other unfortunate thing about having the surname of Lynch is that people invariably refer to my large family as The Lynch Mob. It has, shall we say, an uncomfortable sound.)

Stefan, thank you so much for your kind words. I'm deeply touched, and I really appreciate it.

CW, thank you, always, for being my most intrepid commenter, and for writing your blog on classic films that is a such a joy and a favorite of mine. As for my pal John, on that same trip to Hollywood we took some video, and I have a clip of him standing in the Gower Gulch area singing the song from the Daffy Duck cartoon DRIP ALONG DAFFY (1951) - "The Flower of Gower Gulch." I thought you'd appreciate that.

Forever more, I will not watch Drip Along Daffy without thinking of John.

You should have heard him, he was great. I'm not sure what the passersby on the sidewalk or the car traffic thought, but it was a magnificent rendition.

Congratulations! I've enjoyed reading the site over the years and look forward to continuing to do so. Btw, I had one of those copycat sites too - I almost wouldn't have minded if they hadn't smeared some photoshop "marker" all over my banner in order to give it some bizarre retitling haha.

Thanks, Joel. I wouldn't mind the copycats so much if there was a way to imbed a link that automatically brought the reader back to my original site, something the thief couldn't override.